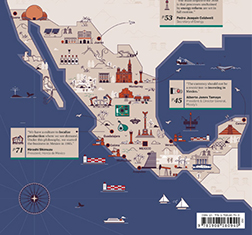 Mexico City, September 18, 2017 – TBY is proud to announce the launch of The Business Year: Mexico 2017, the 6th edition on the country and produced in partnership with ProMéxico and the Executive Council of Global Companies (CEEG).

The publication features over 150 interviews with top executives and government officials, including an opening contribution from President Enrique Peña Nieto.

While outlining recent reforms in IT and telecommunications and its future role in Mexico, President Nieto states, “It is our responsibility to assure that we stay the course in the implementation of a framework of absolute transparency and accountability. Together, we will continue to broaden the boundaries of what is possible. Let us continue constructing a Mexico that is more prosperous, inclusive, competitive, productive, and most importantly, has more opportunities for its citizens.”

This year’s publication contains comprehensive, sector-by-sector coverage of the challenges currently facing Mexican-US trade relations, as well as the opportunities that lay ahead for Mexico within the Pacific Alliance and toward East Asia.

Regarding the future of NAFTA, Secretary Guajardo commented, “NAFTA’s revision should not be based on the idea that the agreement has only been beneficial to one of the signing partners, as NAFTA has brought benefits to all its parties; and we must maintain a trilateral perspective, under a “win-win-win” vision. Thus, NAFTA’s modernization opens up a range of opportunities to strengthen North America, and lays the ground to make it more prosperous, sustainable and inclusive.”

When asked what Mexico could do to reassure investors regarding Mexican-US relations, former president Fox added, “It is not Mexico who caused this turmoil. It is the disrupter and the destroyer also known as Trump who decided to break all the written rules of the economy. He has harmed Mexico, the US’ main partner, too much, and he believes by patting our back he can go back to how things were before.”

The Business Year: Mexico 2017 also includes key excerpts and highlights from a CEO Round Table event organized in collaboration with ProMéxico and CEEG.

This event gathered important personalities in Mexican business, including Frederic García, General Director of Airbus Mexico and President of CEEG Francisco González Díaz, former General Director of ProMéxico; Eduardo Solís, President of the Mexican Automotive Industry Association, among others. The round table explored the role of international enterprises on the integration of Mexican SMEs in international value chains.

TBY is a global media group specializing in economic news, research on national economies, and business intelligence across emerging markets. With operations in over 35 countries, we bring first-hand insights to investors, businesses, and governments worldwide.