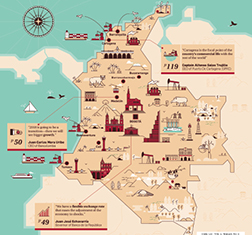 The Business Year: Colombia 2017 is out now!

Bogota, September 18, 2017 – TBY is proud to announce the launch of The Business Year: Colombia 2017, the fifth edition on the country and produced in partnership with the Colombian British Chamber of Commerce.

The publication features over 150 interviews with top executives and government officials, including an opening contribution from Juan Manuel Santos, President of Colombia.

The president reflected on the historic peace deal and elaborated on his vision for the next steps in the post-conflict era:

“Moving forward, we will pass reforms of the greatest importance, such as a reform that will allow the investment of COP1 trillion on tertiary roads, political, and electoral reforms that will contribute to cleaning up and improving our democratic system, a statutory law for the Special Jurisdiction for Peace, and reforms targeting an integral rural development and a more balanced use of the land.”

This year’s publication contains comprehensive, sector-by-sector coverage of the challenges and opportunities that lay ahead for the country’s future in the post-conflict era, including a special contribution by Michael D. Higgins, President of Ireland, regarding Ireland’s experience in its own peace process and its pledged support for Colombia. He comments: “At this very important time in its modern history I want to convey to all Colombians Ireland’s very best wishes for a peaceful, prosperous, and inclusive future. We are pleased, in Ireland, that we have been able, bilaterally and through the EU, to make our contribution to its peace process. Ireland is privileged indeed that Colombians have allowed us to share in their journey from darkness to light.”

The Business Year: Colombia 2017‘s exploration of the post-conflict economy also features the most prominent voices from the tourism sector, which is expected to be among the sectors that benefits the most from the peace deal. María Claudia Lacouture, Minister of Commerce, Industry, and Tourism, says, “Peace brings big opportunities for tourism to Colombia, which today is the second generator of foreign exchange,” while Felipe Jaramillo Jaramillo, President of ProColombia, adds, “We want to take full advantage of this momentum.”