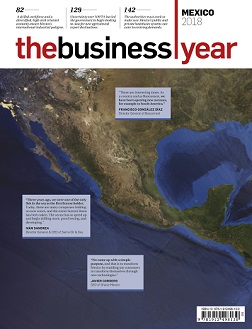 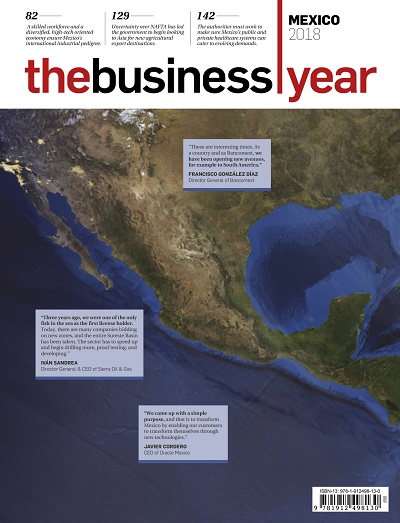 Mexico City, August 31st, 2018— TBY has launched its latest publication on Mexico, covering all the ins-and-outs about doing business in the United Mexican States. The Business Year: Mexico 2018 was published in partnership with the Mexican Business Council for Foreign Trade (COMCE).

The recent elections in Mexico are expected to bring some significant changes. After six years under Enrique Pena Nieto’s presidency complete with landmark reforms in the energy sector, and significant inflows of FDI, Andres Manuel Lopez Obrador (AMLP) is expected to bring considerable changes to the country’s policy mix. The new President-elect has put forward his willingness to tackle corruption and impunity as well as roll back the reform in certain areas. If this rhetoric allowed him to win the elections with the absolute majority, his vision for Mexico is concerning certain investors who still fear the Obrador’s ambitions are less business focused than his predecessor. According to TBY’s analytics, a unique methodology whereby insight from interviewees is parsed using key word analysis to predict trends in the economy, the sector most affected by the elections was tourism, with over one third of all our executives in this sector mentioning related difficulties. Industry, on the other hand, was least affected, with just 10% of interviewees referring to election challenges.

However, certainly some changes are in store, as Obrador himself puts it in a foreword to the publication: “There will be deep changes, but according to the existing order. There will be entrepreneurial freedom, freedom of association, and freedom of belief‚Ä¶ In economic terms, the autonomy of the Bank of Mexico will be respected; the government will keep a financial and fiscal discipline; we will recognize the existing commitments toward companies and domestic and foreign banks.”

With a forecasted growth of 2.3% in 2018 and 3% in 2019, Mexico’s economy has been, and may well continue to be, essentially fuelled by its industry and tourism. The aerospace industry has experienced a significant growth. Queretaro is the best example of this, successfully having formed a prominent Aero-cluster to facilitate the interaction between Tier 1, 2 and 3 companies over the past year. Airbus, Zafran, Bombardier are among the top companies that have bet on Mexico in this sector. Furthermore, the government has created the Aeronautic University of Queretaro (UNAQ) in order to provide a big pool of young talents, highly qualified for these companies. Through a constant interaction and collaboration with the different firms and the Aerocluster, the UNAQ has focused its programs in order to match the needs of the market.

Mexico also became the seventh largest car producer in the world in 2015 and the country keeps attracting new brands. In fact, the Chinese car manufacturer JAC has invested MXN4.4million and partnered with Giant Motors and Inbursa to open a plant in Hidalgo in order to produce two types of SUVs for a young clientele. One of the reasons Mexico is so appealing for companies is its location; Radek Jelinek, President and CEO of Mercedes Benz Mexico told TBY: “there are two reasons for being in Mexico: to be part of NAFTA, which is important for the US and Canadian and Mexican markets, and because Mexico has [‚Ä¶] excellent quality, labor laws to be fast and flexible on decisions, a large pool of young people and great support from the different regions and the Mexican government.”

Mexico’s location is indeed a valuable asset; as are its 12 free trade agreements with 44 different countries. Once again, according to TBY’s analytics 13% of interviewees mentioned geography and location as a strategic advantage for Mexico. However, 80% of the nation’s exports are going towards the US, which means the outlook is challenging. With the NAFTA renegotiation and Trump’s negative rhetoric about Mexico, it will be paramount for the country to start diversifying its exports destinations.

Another very important industry for Mexico’s economy is tourism. This sector has been constantly increasing in the past three years with a number of tourists arrival going from 24.2 million (2013) to 35.1 million (2016). The Secretary of Tourism Enrique de la Madrid is now expecting 39 million visitors in 2018. René Aguado Martínez, from Mexico’s Four Seasons Hotel commented on this growth in TBY’s chapter: “Typically, Mexican beaches have been a magnet for guests around the world. Lately, other areas have followed suit, such as Mexico City, which has been found to be a top destination to travel to, not only for cultural or business reasons, but culinary and leisure ones as well.” Julian Balbuena, President of the Board of Best Day Travel Group told TBY: “we have a great deal of natural wonders to showcase alongside our culture, cuisine, and diverse country”. In fact, the country still has a significant margin for improvement if it can succeed in further developing areas such as cultural-, gastronomy- or eco-tourism. It can also expect greater flows of tourists once the new airport in Mexico City is finalized.

There is still need for considerable reconstruction to repair damages caused by the violent earthquakes that have impacted Mexico City recently. Furthermore, there could be more investment made in oil infrastructures in order to limit high costs due to refining overseas. However, as TBY’s CEO Ay≈üe Valentin pointed out while announcing the release of the publication, “Mexico has been progressively erasing its reputation for insecurity, and promoting one of diversity and prosperity. TBY continues its extensive coverage of Mexico’s economy, with exclusive interviews that are full of vital insights for any discerning investor.”