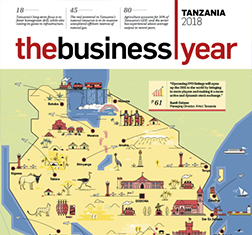 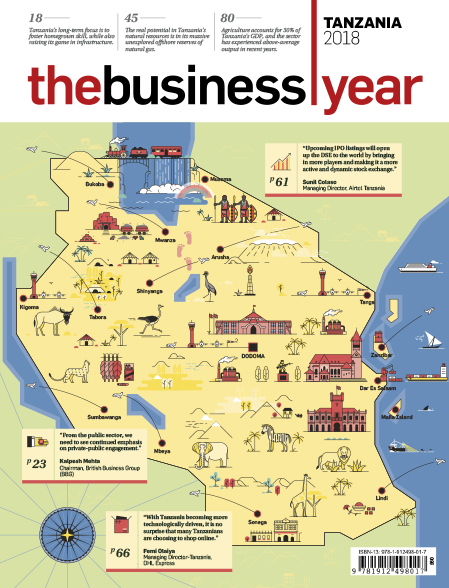 Dodoma, December 5, 2017 – TBY is pleased to announce the launch of The Business Year: Tanzania 2018, the fourth edition on the country, produced in partnership with the Ministry of Foreign Affairs and East African Cooperation, the British Business Group, and the Tanzanian National Business Council.

The publication features over 150 interviews with top executives and government officials, and is opened by the words of His Excellency John Magufuli, President of the United Republic of Tanzania, driving Tanzania as it continues to emerge as a powerhouse of East Africa. “We promise to continue to address the challenges faced by our people to improve the working and living environments, and ensure all citizens benefit from the fruits of their labor,” the President said.

This year’s publication contains comprehensive, sector-by-sector coverage of the challenges and opportunities that lie ahead in the coming year for Tanzania. With the country’s Second National Five-Year Development Plan (FYDP II) now in full swing, several sectors of the economy are flourishing.

Transport is one such sector benefitting from increased governmental noncore spending, with many projects, like the works at Bagamoyo Port, and the renovations to Julius Nyerere International Airport, back on track. 2017 also saw the launch of the Dar Rapid Transit System, a cutting-edge public transportation system that has seen Dar es Salaam become the first African city to win the global Sustainable Transport Award.

IT is another key focus for Tanzania in 2018. With boosting financial inclusion top of the agenda for the Ministry of Finance, and the Bank of Tanzania, mobile money operators are a key part of the country’s plans for economic growth, given their vital role, bringing in swathes of the unbanked population into the formal sector. Ian Ferrao, Managing Director of Vodacom Tanzania, said: “From a technology point of view, our vision is to lead Tanzania into the digital age and use the latest developments to continue changing lives here.” What’s more, 60% of our interviewees in the IT chapter revealed they are working to improve connectivity in rural areas. There are even signs that Tanzania’s mobile money market could challenge neighboring tech giant Kenya’s. “Using M-Pesa, we can turn Tanzania cashless faster than any other market.” Ferrao emphasized.

Other key government and private sector figures featured in The Business Year: Tanzania 2018 include Honorable Augustine Mahiga, Minister of Foreign Affairs and East African Cooperation, Professor Benno Ndulu, Governor of the Bank of Tanzania, Jared H. Zerbe, CEO of Tanzania International Container Terminal Services, Devota Mdachi, Managing Director of the Tanzania Tourist Board, and other key interviewees from all the sectors.

Geoffrey Mwambe, Executive Director of the Tanzania Investment Centre (TIC), highlighted the measures being put in place to boost ease of doing business in the country, and the publication ends with a practical guide to operating in Tanzania.