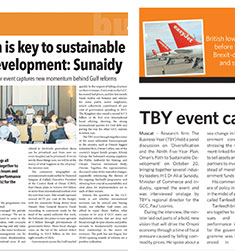 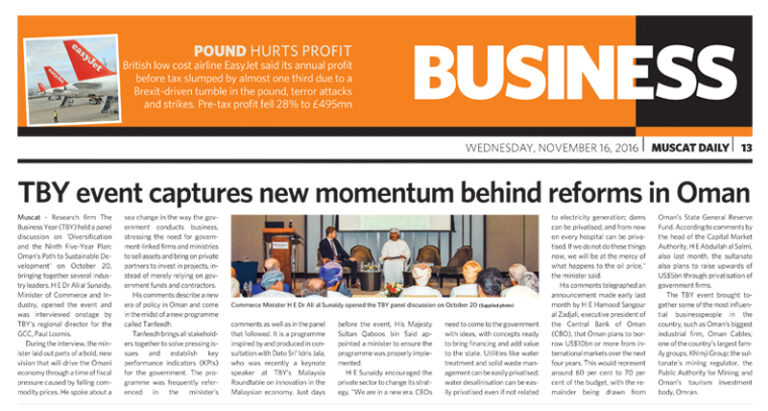 The panel discussion organized by TBY on October 20 in Muscat has received extensive coverage by Omani media. The Oman Daily Observer, a widely-respected English-language broadsheet and one of the oldest newspapers in the Sultanate, and Muscat Daily, another leading English-language periodical, both featured the event.

Entitled “Diversification and the Ninth Five-Year Plan: Oman’s Path to Sustainable Development,” the panel was opened by HE Dr. Ali bin Masoud Al Sunaidy, the Minister of Commerce and Industry, and gathered some of the most influential industry leaders in the country. The minister was interviewed by Paul Loomis, TBY’s Regional Director for the GCC, as part of the event, and took the opportunity to highlight the importance of the government’s privatization plans to ensure sustainable economic development in the Sultanate. The minister’s comments about the implementation of Tanfeedh, a program that gathers the public and private sectors to discuss reforms were highlighted in the press coverage.

“We are in a new era. CEOs need to come to the government with ideas, with concepts ready to bring financing and add value to the state. [‚Ä¶] If we do not do these things now, we will be at the mercy of what happens to the oil price,” the minister was quoted as saying in the Oman Daily Observer article.

The TBY event brought together some of the country’s leading businesspeople, including Oman’s biggest industrial firm, Oman Cables, and one of the country’s largest family companies Khimji Group. The Sultanate’s mining regulator, the Public Authority for Mining and Oman’s Tourism Investment Body Omran were also represented at the meeting.