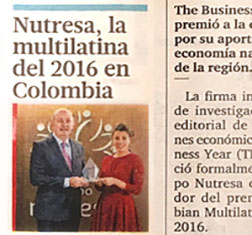 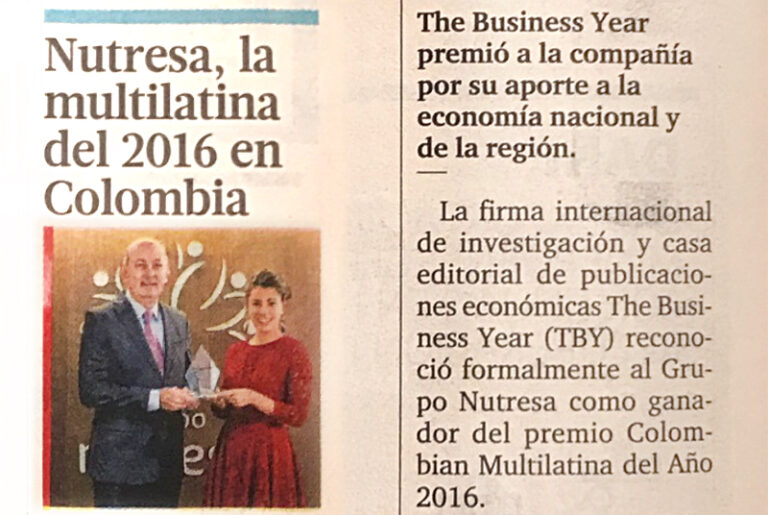 TBY was recently featured in leading Colombian daily Portafolio for its awarding of Grupo Nutresa with the “Multi-Latina of the Year” award for 2016.

TBY formally recognized Grupo Nutresa as the recipient its prize at a recent meeting. According to TBY’s Country Manager for Colombia, Giulia Di Loreto, “The award follows a poll of TBY’s editorial board, which has bestowed the honor on Grupo Nutresa for its successful investments and key contributions to the growth and development of economies throughout Latin America.”

TBY recently met with Carlos Ignacio Gallego Palacio, the CEO of Grupo Nutresa, who received the award on behalf of the company. Commenting on the award and on the group’s continued commitment to the region, Gallego said, “We are very honored with this acknowledgement from The Business Year. Grupo Nutresa’s internationalization model, which is supported in the recognition and incorporation of local talent and in the strength of acquired brands, among others, has led us to become a referent as a Multi-Latin company, and that commits us to continue working resolutely in the region.”

While Grupo Nutresa has over 60% of the local market share in Colombia, its products can be found in over 72 countries globally. Grupo Nutresa has a direct presence throughout Latin America, with 13 production plants in the region outside of Colombia. These direct foreign investments account for over 13,000 job opportunities internationally.