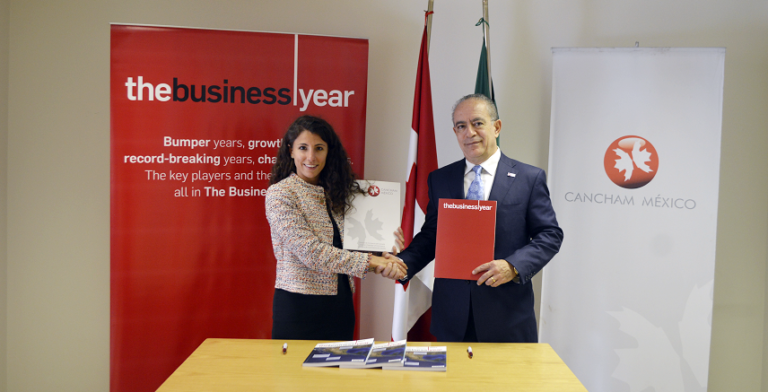 The Business Year partners for the first time with the Canadian Chamber of Commerce in Mexico to further its research on the country’s economy.

Mexico City, November 5, 2018—The beginning of a new partnership between the Canadian Chamber of Commerce (CANCHAM) in Mexico and The Business Year was concreted on Monday at an MoU signing ceremony between Armando Ortega, President of Cancham, and Giulia di Loreto, TBY Country Manager. The ceremony marks the first collaboration between the two organizations.

TBY’s latest publication aims to highlight the unique investment opportunities that lie within Mexico, Latin America’s second biggest economy, via first-hand insights from leaders in the public and private sector.
Canadian companies play a unique role within Mexico as trade between the two countries has more than quadrupled since the North American Free Trade Agreement was signed in 1994 according to EDC, Canada’s export credit agency. In 2016, Canadian direct investment in Mexico reached over CAD16.7 billion and Mexican direct investment in Canada totaled to CAD1.7 billion in the same year.

At the ceremony, Armando Ortega congratulated TBY on its work in the country so far. “The Business Year is an international media platform with a presence in a sophisticated niche of the business community,” said CANCHAM’s President. “We are sure that the agreement will be beneficial to our partners, and will also help reinforce the chamber’s public presence.” TBY’s representative, Guilia Di Loreto, added that this is an opportunity to place emphasis on the great work being undertaken by Canadian companies in the country. “The partnership will further highlight the vision of Canadian entrepreneurs in next year’s edition,” she said.

CANCHAM aims to function as a link between the business communities in Mexico and Canada. “We are a platform that can be used by any Canadian doing business in Mexico. CANCHAM can help these companies find the right partner in Mexico to create a win-win business deal,” Ortega stated during an exclusive interview with TBY. Mining is one of its main sectors of focus, followed by other energy industries such as oil and renewable energy.

The Business Year: Mexico 2019 launches in mid-2019, and will be the seventh edition published on Mexico’s economy. The Business Year is global media group that specializes in economic news, research on national economies, and business intelligence. It has operations in over 35 countries.