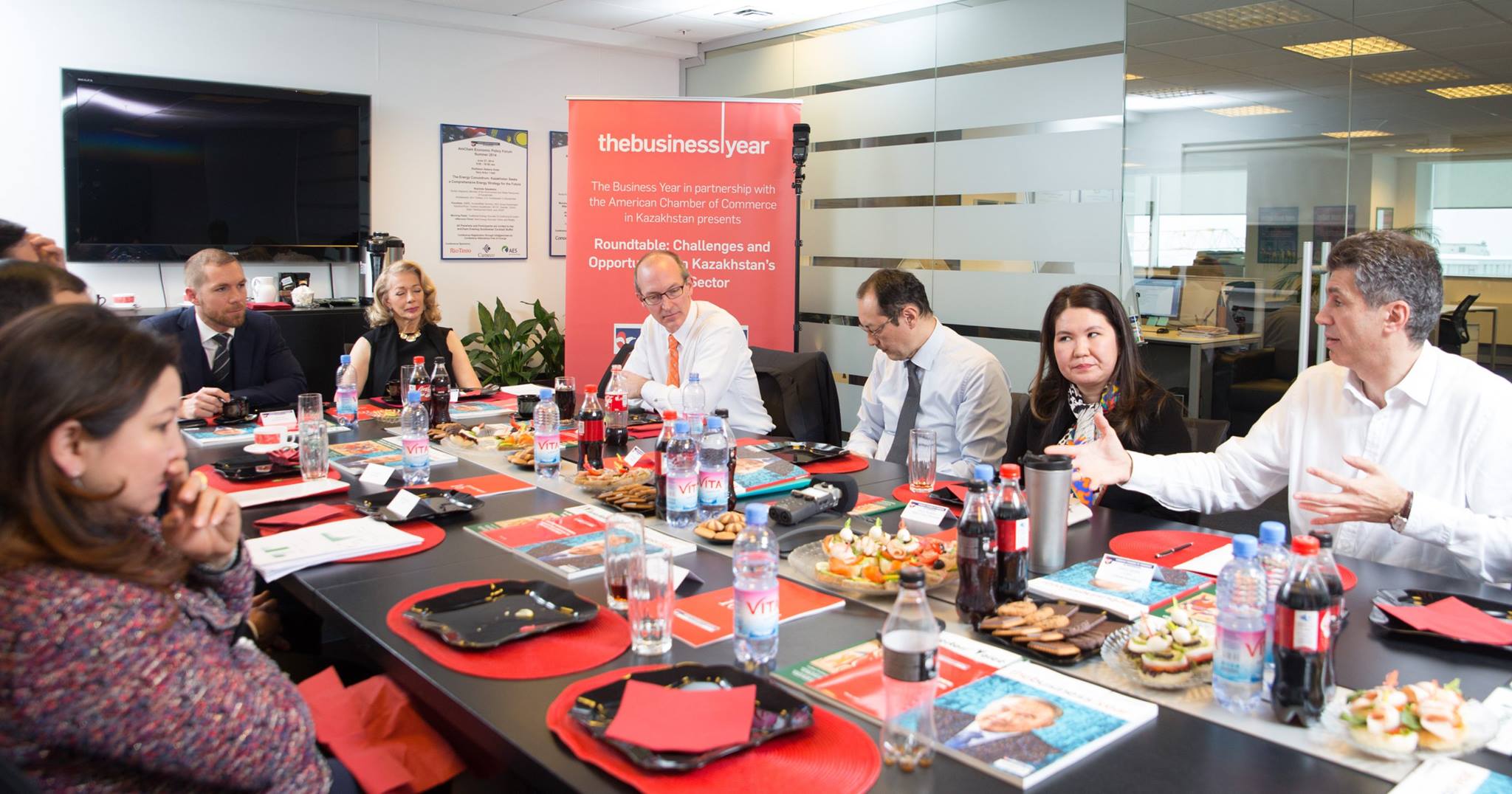 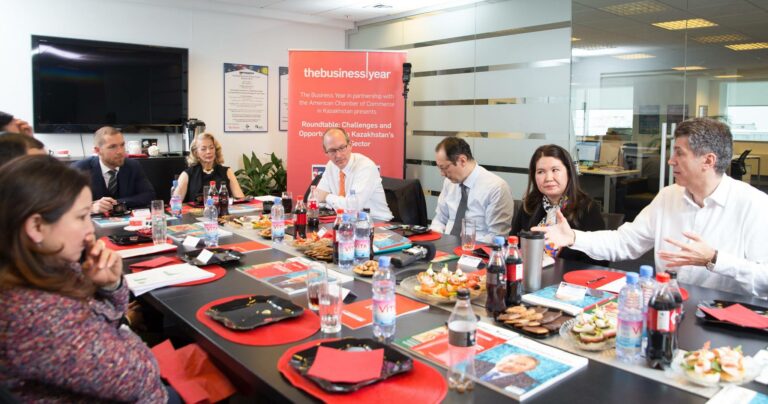 The American Chamber of Commerce in Kazakhstan and TBY jointly organized a roundtable with the heads of leading financial institutions in the country to discuss the current status of banking and their vision of the sector’s development. The event was hosted by Doris Bradbury, AmCham’s Executive Director, and moderated by Leland Rice, TBY’s Editor-in-Chief, and saw the attendance of Gordon Hasking, CEO of Al Hilal Bank; Aiman Mukanova, Director at Bank of Tokyo-Mitsubishi; Sabit Khakimzhanov, Head of Financial Stability of the National Bank of Kazakhstan; Andrey Kurilin, CEO of Citibank Kazakhstan; Aigul Djailaubekova, Deputy Chairperson of Tsesnabank; Valeriy Khegay, Head of Market Data for Kazakhstan Stock Exchange; and Gani Uzbekov, CEO of Capital Bank.

Mr. Rice welcomed the attendees by stating: “After seven years of TBY operations here, we have seen demand for information on Kazakhstan continue to grow. This reflects Kazakhstan’s changing role in the world, with major cross-border transportation deals, Expo 2017, hosting of the Syrian peace talks, and, in particular, reform and transition in the banking sector.”

The opening topic was regulatory changes put in place by the National Bank since 2014, and how these have affected commercial banks. From the regulator’s side, Mr. Khakimshavnon said the main policies have yet to be implemented, as the biggest issue facing Kazakhstan’s banking sector is uncertainty surrounding the quality of assets. From the viewpoint of commercial banks, Ms. Djailaubekova explained how the National Bank’s tightening regulations on capital requirements, although essential during an economic downturn, can represent a challenge for banks. Nevertheless Tsesnabank’s growth demonstrates how its operations have not been significantly affected by such regulations.

Banking sector consolidation has been another widely discussed topic in Kazakhstan in the last few months. Ms. Djailaubekova explained that talks regarding a potential Qazkom-Halyk Bank merger—which would effectively create a “superbank”—may have positive effects on reducing costs through a larger market share. On the other hand, she noted, a large combined lending portfolio needs sufficient capitalization to be handled.

Mr. Kurilin expressed his view that there is no consensus on the ideal number of banks that should operate in an economy. “It is the underlying economy, rather than temporary factors such as the exchange rate or inflation, that really determines the volume of banking assets and the number of banks in an industry.”

Capital Bank’s Mr. Uzbekov said: “It is interesting to hear that CEOs of big banks are for consolidation, as in my opinion small banks should exist as they are disruptors. For us, innovation is a matter of survival, whereas for big banks it is not essential since they will always rely on a fixed stream of revenue.”

On the topic of smaller banks being disruptors, Mr. Hasking described how Al Hilal Bank plays a similar role by also offering an alternative platform, namely Islamic banking. He said that despite the bank’s currently marginal role in the market, some clients are attracted to its products not necessarily because of their Islamic nature, but rather because of “the security of a state [Abu Dhabi]-owned institution rated A+, which itself can be attractive to people concerned about the current state of the local market.” Mr. Hasking also announced that Al Hilal would commence retail banking operations in Kazakhstan in 2017.

Mr. Rice then gave the floor to Mr. Khegay from the Kazakhstan Stock Exchange to discuss the main developments in the stock market. Mr. Khegay explained that inclusion on the stock exchange can be a valid alternative to bank credits, but “unfortunately the degree of the local stock market involvement in the economic processes still remains quite low.” He listed lack of awareness and financial education as the primary causes of this.

Ms. Mukanova, representing the Bank of Tokyo-Mitsubishi, which only deals with foreign currency, expressed her agreement with other participants on the need to further develop the stock market. “We would like to be able to fund our operations in tenge and we would like a tenge-to-foreign currency market and to have both local and foreign investors happy to invest locally.”
When Mr. Rice asked attendees to share their outlook on 2017, the general sentiment was cautiously optimistic regarding oil prices. As Kazakhstan further integrates in the world economy, there will be a need to closely monitor other increasingly influential external factors, such as the implications of US President Trump’s foreign policy as well as elections in major European economies.

From a domestic economy point of view, the speakers called for a well-defined approach of the National Bank towards the issue of non-performing loans, easier labor laws to encourage immigration, the acceleration of government reforms, and the prompt implementation of the privatization program.

A video teaser of the roundtable will be available on www.thebusinessyear.com, while extended coverage will be featured in the upcoming edition of The Business Year: Kazakhstan 2017.