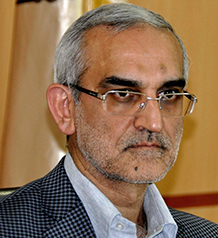 Working On The Railroad

Dr. Mohsen Pourseyed Aghaei is the Vice Minister of Roads and Urban Development. He is also the Chairman of the Board and President of the Railways of the Islamic Republic of Iran. Before holding different positions in RAI, he was the Chairman of the Board and President of Iran Passenger Trains Co. and Managing Director of the Rail Transport Section of MAPNA Group between 2007 and 2013. Dr. Aghaei is a Member of the Board of the Iranian Rail Industries Association and the Iranian Association of Rail transport Engineering. He holds a PhD in industrial engineering from Tarbiat Modarres University.

Share on:
TBY talks to Dr. Mohsen Pourseyed Aghaei, Vice Minister of Roads and Urban Development & Chairman of the Board and President of the Railways of the Islamic Republic of Iran (RAI), on developing a regional rail network and attracting FDI for its projects.

Iran aims to become a land bridge connecting Asia and Europe. What is the importance of developing an extensive railway network to boost trade with foreign countries?

Iran is in an excellent position geographically whereby it can not only connect Asia with Europe, but also CIS countries with the Persian Gulf. We focus on using our location as a bridge to connect all sides. We have some connections currently running from north to south. We have a rail connection from Bandar Abbas going into Turkmenistan, Uzbekistan, and Tajikistan. In 2015, we added a new connection from Sarakhs in the east of Iran that goes through Turkmenistan and directly into Kazakhstan. We have one rail connection with Turkey from the Razi border. Now, we are constructing a new North-South Rail Corridor to link Iran to Azerbaijan and Russia. We are also constructing a new line to Herat in Afghanistan. We have completed the work up to the border and are now doing the construction work on the Afghan side, which Iran is also paying for. By 2016, the work will be done and then we have major plans to develop the railway further to connect to other countries. We plan to connect with Iraq on two sides, one on the southwest of Iran through Khorramshahr to Basra, with only 35km left to go before completing this line. We have signed an MoU with the government of Iraq to build a bridge to complete that connection. We have another plan to connect with Iraq through Khosravi border in the west of Iran to Baghdad, which is over 70km. We plan to link up with all our neighboring countries and can then play a better role in this network of connections.

Iran plans to develop a 12,000km rail network. What is your strategy to attract foreign investment for this project?

For infrastructure, we look at using finance through tenders and not direct investment, as it is difficult to engage foreign investors in infrastructure projects. Our typical strategy is to use loans from foreign countries to finance projects. Of the intended USD25 billion, we plan for a maximum of USD10 billion to come from foreign investors as direct investment for operational activities and the rail fleet. For this reason, we plan to have attractive packages for investors of the fleet. For example, we will provide free infrastructure to all the operators for a number of years. This means that if a company invests in freight cars today, it will not pay any taxes for using any of the rail infrastructures for four years. Similarly, if investors bring locomotives here to use on our lines, Railways of Iran (RAI) will give them a guarantee to buy their services. However, there are some exceptions. For example, for the Rasht-Astara railway project, which is part of North-South Corridor to link Iran and Azerbaijan, we look to invite foreign investors as it is more useful for transit and they can use foreign currency income.

In February, the first train on the Silk Road arrived from China. What is the importance of this project for Iran?

This new corridor is important because Iran has a good relationship with China. Businessmen in Iran import a substantial number of goods from China. Currently, they use shipping lines for this, usually from Shanghai to Bandar Abbas Port. This new railway line is important because it will reduce transportation costs, which will attract traders to use rail to transport goods from China to Iran and on to Europe. The first train was successful, and it took around 14 days from Yiwu to Tehran. We hope to have more trains and expand this service in the future, for example with more trains to Turkey and directly to Europe. Turkey is building new bridges on the Bosporus that can be used for both road and rail. This would create a complete railway line from China to Iran and then to Turkey and Europe.