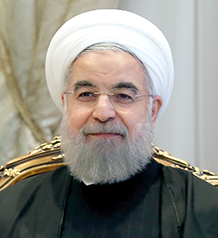 HE Dr. Hassan Rouhani was born on the November 12, 1948 in Sorkhe (Semnan province, Iran). He is a lawyer and a Muslim cleric. Prior to his election as President of the Islamic Republic of Iran in August 2013, Dr. Rouhani was the Representative of the Supreme Leader to the Supreme National Security Council and a Member of the Assembly of Experts, being the head of the Political and Social Committee. He holds a PhD in constitutional law from Glasgow Caledonian University (UK) and has published around 100 books and scientific papers.

Share on:
HE Dr. Hassan Rouhani, President of the Islamic Republic of Iran, on his hope for peace in the Middle East and optimism for the full implementation of JCPOA.

Fifteen years have passed since the painful terrorist attack in New York, a disaster whose human dimensions moved the entire world. On that day, no one imagined that this occurrence would lead to larger disasters, resulting in a devastating war in the Middle East and the spread of insecurity across the globe. This war has sown the seeds of borderless terrorism everywhere on earth. Today, the most pressing question as to why we are facing such a situation should be on the agenda of international forums. We need to find out which approaches, policies, and erroneous actions paved the way for the spread of insecurity throughout the world. And what would be the picture the world 15 years from now.

Security has become a global problem at a time when major powers are mainly focusing on advancing different methods of repression and military intervention under the pretext of creating a secure environment for their citizens. The genesis of borderless violent extremism and terrorism could be attributed to the security strategies developed by major powers in the past 15 years. The main lesson to learn from the analysis of this trend is that security in one region at the cost of insecurity in others would not only be impossible but it could also lead to more insecurity everywhere.

The terrorists even went as far as claiming to have established States in the Levant, Iraq, and Libya. More unfortunately, they hide their nefarious intents behind religious literature, thus turning a compassionate religion into an instrument of violence and terror by spreading extremist and Takfiri propaganda.
The century that began with terror and violence in New York should not continue with hostile competitions and expanding conflicts in the Middle East.

Today in fact, the discourse of hatred and violence in the Middle East and North Africa is spreading with an astonishing speed, and this region is stuck in a web of the most savage and destructive policies. Millions of Syrians are stranded in deserts and high seas, and hundreds of thousands of them are subjected to violent deaths. Iraqis of every ethnic group are concerned about their territorial integrity and the future of their homeland. The defenseless people of Yemen are subjected to daily aerial bombardment, and Afghanistan, following decades of occupation and atrocity, is yet to find comfort from suffering, violence, and terror. The oppressed Palestinians are still afflicted by a web of apartheid policies and atrocities set by the usurping Zionist regime.

Undoubtedly, if the region is to reverse the current dangerous trend into one towards development and stability, certain countries must stop bombing their neighbors, and abandon supporting Takfiri terrorist groups, and, while accepting responsibility, try to compensate for past mistakes. If the Saudi government is serious about its vision for development and regional security, it must cease and desist from divisive policies, spread of hate ideology and trampling upon the rights of neighbours, accept its responsibility for the protection of the lives and dignity of pilgrims, and construct its relations with the nations in the region on the basis of mutual respect and accountability.

The future of our region rests on dealing with fundamental challenges such as security crises, due to the inefficiency and the lack of legitimacy of governments. We will not be able to combat criminal and terrorist networks without genuine democracy and without a real participatory approach at the national and transnational levels.

Iran’s principled approach calls for constructive partnership with our neighbors with a view to establishing an enduring order based on shared security and efforts aimed at enhancing the development of the countries in the region and mutually beneficial economic cooperation. To uproot violence in the region, there is no choice but to focus on promoting democracy, citizenship rights, and economic development.

Iran opposes any kind of sectarianism and any attempt to promote religious gaps. The Muslim people, be they Shias or Sunnis, have lived together for centuries in harmony and mutual respect, and will continue to do so. Attempts to turn religious dissimilarities into tense confrontations are rooted in vested interests of certain countries, which try to hide their quest for power covered in religious slogans. Iran considers it imperative to preserve the territorial integrity of states, keep national borders intact, enhance peoples’ right to self-determination, and uphold the principle of refraining from the threat or use of force. We also reiterate the need to use diplomacy for conflict resolution.

Despite today’s difficulties, I have hope in tomorrow. I have no doubt that we can prevail through prudence and wisdom. The experience acquired through dialogue between Iran and the group of 5+1 and the fruition of the Joint Comprehensive Plan of Action (JCPOA) are indicative of the success that we could achieve through moderation, constructive interaction and the promotion of dialogue; a policy that brought a long, complicated, and unnecessary crisis to an end by adopting a win-win approach. This deal confirmed the peaceful nature of Iran’s nuclear program through devising confidence-building mechanisms, closing the so-called “possible military dimension” file and reinstating Iran’s right to develop a peaceful nuclear program. This deal also put an end to unfounded concerns and led to the removal of the brutal sanctions against Iran.

Beyond the nuclear file, however, the JCPOA contains important lessons for resolving complicated international problems. This deal is not only a political agreement; it also represents a creative approach and method for constructive interaction with a view to peacefully resolving crises and challenges. To learn lessons from the JCPOA and put them towards improving international relations, we should never forget that pressures, sanctions and illegal threats, which sought to fully dismantle Iran’s enrichment program, were all defeated. And today, the UN Security Council and the International Atomic Energy Agency (IAEA) have formally accepted Iran’s peaceful nuclear program.

The US is fully aware that JCPOA constitutes a recognized multilateral agreement, and any failure on the part of the US in implementing it would constitute an international wrongful act and would be objected to by the international community. Any failure in implementing the JCPOA will further erode the credibility of the US in the world. The lack of compliance with the JCPOA on the part of the US in the past several months represents a flawed approach that should be rectified forthwith. Unfortunately, such illegal actions are not unprecedented: the latest case in point is the US Supreme Court ruling to seize billions of dollars of the Iranian people’s assets. This experience demonstrated that the Zionist pressure groups could go as far as having US Congress pass indefensible legislations forcing the highest American judicial institution to violate pre-emptory norms of international law.

With God’s help, the Iranian people’s endurance and the increasing participation of Iran’s international partners from different regions, only eight months after the removal of the cruel nuclear-related sanctions, the economy of Iran, as the most secure and most profitable investment destination in the region, is showing clear improvement. Iran’s economic growth rate surpassed 4% in spring 2016, the inflation rate dropped to single digits, and Iran has come close to pre-sanction level of oil production and export. All in all, we are witnessing more development in the economic, scientific and technological fields in Iran.

Iran is one of the rare oil-producing countries that could offset the shocking impact of the sharp slide in oil price in 2014. We are intent on strengthening economic stability and consistency, thus encouraging more investment, through economic reforms and fiscal and financial discipline, while preserving our low-inflation achievement. The economic growth is to increase to around 5% by the end of 2016. Currently, based on all domestic and international prediction, Iran is enjoying one the highest growth rates among the oil-producing countries.

Despite all hardships, I deeply believe that moderation will prevail over extremism, peace will triumph over violence, enlightenment will overcome ignorance, and finally justice will rise above injustice. What is important is that belief, hope and efforts are towards realizing peace and justice and there is no doubt that the Almighty will assist all those who endeavor towards peace, justice and moderation.