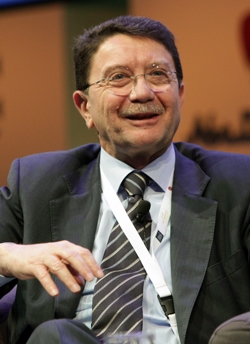 Taleb Rifai was born in 1949 and elected Secretary General of the World Tourism Organization (UNWTO) in 2009. He had previously served as Deputy Secretary General from 2006 until 2009. He has an extensive background in international and national public service, the private sector, and academia. Prior to joining UNWTO he was the Assistant Director General of the International Labour Organization (ILO). He has also served in several ministerial roles in the government of Jordan, including Minister of Planning and International Cooperation, Minister of Information, and Minister of Tourism and Antiquities. As CEO of Jordan’s Cement Company, he successfully led the first large-scale privatization and restructuring scheme in Jordan during the mid-1990s. Other positions he has held include Director of the Economic Mission to Washington, DC and Director General of the Investment Promotion Corporation of Jordan. He has a PhD in Urban Design and Regional Planning from the University of Pennsylvania.

Share on:
"Abu Dhabi is a very important tourism destination that is slated to become more important still."

What does it mean to visit Abu Dhabi for business?

In reality, there is an underlying message in where and how people meet each other. To meet in Abu Dhabi at this moment of tremendous change sends a very powerful message about the positioning of this region in relation to the rest of the world. The UAE is a success story by all measures, and this is its capital. It is also important that the World Travel & Tourism Council (WTTC) meets in the Middle East, at a time when people are often nervous about the situation here. This is precisely why we feel it is an important meeting.

How important is Abu Dhabi as a tourism destination?

Abu Dhabi is a very important tourism destination that is slated to become more important still. We have learned from experience that the most important element of the success of any destination is the existence of the political will to make it successful. It is not about what a destination has, but what its leaders do with the destination’s existing resources. There is a clearly demonstrated will on the part of the government to make tourism work.

“Abu Dhabi is a very important tourism destination that is slated to become more important still.”

There are six other Emirates in the UAE. What makes Abu Dhabi different?

To answer this question, I emphasize the leadership of Abu Dhabi. The fact that this is a resource-rich country that has enjoyed a high level of living standards and wealth, but chose to invest much of its wealth into the tourism industry, is what makes it different.

Dubai Creek is being reviewed this year as a potential UNESCO World Heritage destination. Do you believe the site deserves this recognition?

I am not an authority on the topic, but I do believe that the fact that they are presenting Dubai Creek for review is more interesting than whether or not in achieves the title. The nomination also shows that UNESCO’s members recognize the delicate natural foundations of the city and sends the message that they are sensitive to its beginnings. If Dubai Creek becomes a World Heritage site, it would not only significantly boost tourism, but it would also send the correct message to the rest of the world about how careful the UAE is when it comes to environmental issues.

How important is stability for tourism in the region?

Stability is always important everywhere in the world. It is impossible to sustain a tourism industry without maintaining a minimum level of stability. However, for the Middle East, it is a long-term issue. The Earth has been shaken as a result of events in the region. Nonetheless, we prefer to look at the middle- to long-term situation, and in that sense these events have the potential to bring about positive changes.

Do you think the UAE is benefitting from problems in Egypt?

Egypt has been affected, but the country is doing much better than people may think. It suffered heavily in 2011, but in 2012 it regained a steady number of tourists. In 2011, there was a redistribution of tourism from some countries such as Egypt to the Gulf. Infrastructural changes that were being developed over the previous six or seven years in the Gulf were being completed, and it was logical that some tourist traffic from other destinations ended up in the Gulf region. The UAE in particular was ready for this new stream of tourism traffic.

What effect do you think the rise of more conservative governments is having on tourism in the region?

To reply with what I was told by the Prime Minister of Tunisia, who belongs to a party which is considered conservative, “there will never be a government in Tunisia that halts tourism, because it would have a catastrophic effect on employment for so many people.” He was honest, and I believe that the benefits of tourism transcend ideology. Each country has to focus on its own strengths.

How important would a single GCC visa be to tourism here?

Very important. It would encourage people to travel to more than one destination in the area. For outsiders, to be able to hop between different countries would be tremendous.

What impact do you anticipate from the FIFA World Cup 2022 in Qatar?

The event will be great for the region as an opportunity for millions of people to experience live in the Gulf. It will be an opportunity for the region to show what it has, and hopefully dispel some of the prejudices and ideas about the Gulf that people in the world may hold. Any country that is able to accommodate hundreds of thousands of people for an event is a country with amazing capabilities.

How is Abu Dhabi planning accommodate the rapidly growing number of tourists predicted to arrive in the coming decades?

Currently, 51% of tourists are traveling by air. This means that the increase in travel will lead to the expansion of the aviation industry. In turn, transportation needs will require innovative investment in airports in a more sustainable and feasible way. Environmental issues will be at the forefront of the challenges for the aviation industry, in both the construction of airports and how aircraft operate.

Is there a chance that Europe will be left behind as the Middle East, Latin America, and Asia progress?

In the future, we foresee that the tourism market share will be equitably divided between Europe and the rest of the world. By 2015, there will be a 50-50 balance in tourism between the developed world and the developing world, and by 2030 the balance may slide to 60-40 in favor of the developing world. We see it as a fairer distribution of tourism in the world.