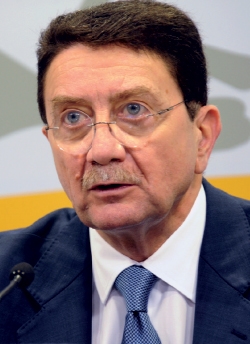 Taleb Rifai was elected Secretary General of the World Tourism Organization (UNWTO) in 2009, having served as Deputy Secretary General from 2006 until 2009. He has an extensive background in public service, the private sector, and academia. Prior to joining UNWTO, he was the Assistant Director General of the International Labour Organization (ILO). He has also served in several ministerial roles in the government of Jordan, including Minister of Planning and International Cooperation, Minister of Information, and Minister of Tourism and Antiquities. Other positions have included Director of the Economic Mission to Washington, DC and Director General of the Investment Promotion Corporation of Jordan. He holds a PhD in Urban Design and Regional Planning from the University of Pennsylvania.

Share on:
What does it mean to visit Abu Dhabi for business? In reality, there is an underlying message in where and how people meet each other. To meet in Abu Dhabi […]

What does it mean to visit Abu Dhabi for business?

In reality, there is an underlying message in where and how people meet each other. To meet in Abu Dhabi at this moment of tremendous change sends a very powerful message about the positioning of this region in relation to the rest of the world. The UAE is a success story by all measures, and this is its capital. It is also important that the World Travel & Tourism Council (WTTC) meets in the Middle East, at a time when people are often nervous about the local situation. This is precisely why we feel it is an important meeting.

How important is Abu Dhabi as a tourism destination?

Abu Dhabi is a very important tourism destination that is slated to become even more important still. We have learned from experience that the key element in the success of any destination is the political will to make it successful. It is not about what a destination has, but what its leaders do with the destination’s existing resources. There is a clearly demonstrated will on the part of the government to make tourism work.

How important is stability for tourism in the region?

Stability is always important everywhere in the world. It is impossible to sustain a tourism industry without maintaining a minimum level of stability. However, for the Middle East, it is a long-term issue. The Earth has shaken as a result of events in the region. Nonetheless, we prefer to look at the mid- to long-term situation, and in that context these events have the potential to bring about positive changes.

“Abu Dhabi is a very important tourism destination that is slated to become even more important still. “

What effect do you think the rise of more conservative governments is having on tourism in the region?

To reply with what I was told by the Prime Minister of Tunisia, who belongs to a party which is considered conservative, “there will never be a government in Tunisia that halts tourism, because it would have a catastrophic effect on employment for so many people.” He was honest, and I believe that the benefits of tourism transcend ideology. Each country has to focus on its own strengths.

How important would a single GCC visa be to tourism here?

Very important, because it would encourage people to travel to more than one destination in the region. For visitors to be able to hop between different countries would be tremendous.

What impact do you anticipate from the FIFA World Cup 2022 in Qatar?

The event will be great for the region as an opportunity for millions of people to experience live in the Gulf. It will be an opportunity for the region to show what it has, and hopefully dispel some of the prejudices and ideas about the Gulf that people in the world may hold. Any country that is able to accommodate hundreds of thousands of people for an event is a country with amazing capabilities.