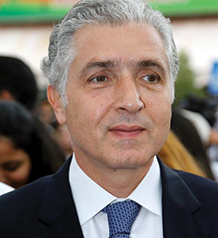 An entrepreneur and a public servant, Jamal Itani is the owner of Levant Holding. He previously was president of the Council for Development and Reconstruction from 2001 to 2005, General Manager for Solidere since 2014 to date. He holds a bachelor’s degree in civil engineering from George Washington University and a master’s degree in civil engineering and transportation from the Pennsylvania State University. Itani led the Beirutis List to win the municipal election of Beirut on May 9, 2016.

Share on:
TBY talks to Jamal Itani, Mayor of Beirut, on what the municipal elections mean for the political future of the country and what role the private sector will be playing in that vision.

The recent municipal elections injected positivity into the political life of Lebanon. How will this translate into a solution for the political impasse the country has been living for the past two years?

The recent elections demonstrated that the will to develop and to succeed is in the DNA of the Lebanese people. They proved that when there is a will, there is a way, and our will is to truly fulfill our democratic rights and to elect a valuable representative out of the numerous political parties that play a role in the political sphere of Lebanon. Moreover, this election has proven that Lebanon is well prepared to face any election in the upcoming years, and that we can do it in a peaceful and fruitful manner.

At this early stage of your mandate, what will you focus on to further develop the capacities of Beirut?

We put in place the development plan for Beirut 2016-2022, given the six-year mandate I was elected for. The plan is divided into the sectors we want to focus on for the following six years, from environmental issues, solving the transit problems of the city, and improving and increasing green spaces around Beirut, something that has been long overdue to our citizens. We also have a major plan to improve the economy of Beirut. Around 45% of the Lebanese population live or work in the capital; if the economy here performs well, the entire country will perform well, too. We want Beirut to be an expansionary economic platform for the rest of the country, to have spillover effects into less privileged parts of Lebanon. To achieve this, we will implement the necessary infrastructure and we will interact with local traders and players in the Beiruti market. We will embrace a promotional agenda for their businesses so they can attract investors, bring money into the city, and develop commercial capabilities whilst simultaneously solving problems hindering economic activity in the capital.

What is your plan to attract foreign investors and make them focus on Beirut?

A major part of our success will rely on the partnership between the private and public sectors. This is why in major projects like new parking developments or the solid waste management project we will definitely involve the private sector. I have experience in embarking on PPPs in other countries, hence I strongly believe that the private sector has the ability to manage investments and protect their returns, while having higher social indicators and good operational standards that will also benefit the government. In Lebanon, the private sector has traditionally excelled much faster than the public sphere, and we can learn from each other for the benefit of the city. We also need to increase transparency so people feel encouraged to invest in the country, regardless if they live in or outside of Lebanon. If we are good enough to attract the private sector and the Lebanese diaspora, we can talk about developing megaprojects in the city, and this will be crucial for the capital’s development.

What changes would you like to see in Beirut by the time you leave office?

I want to make sure that there is a final solution for the solid waste problem that has long affected the lives of thousands of Beirutis. I also want to implement sewage water treatment plants, guarantee the water supply, solve the traffic issues in the city, and implement efficient public transportation. Finally, I consider culture a key component of every society; therefore, I want to make sure that our cultural heritage will be harnessed and accessible to everyone in the city.