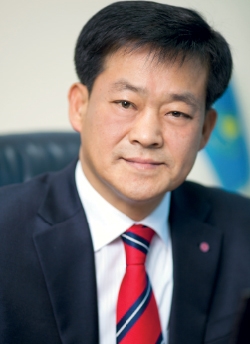 When Things Are Good…

Hoseop Kang has worked for LG Electronics for over 27 years, and has significant global experience in business development. He previously ran LG Electronics’ TV business in India and the UAE, and is currently heading up markets in Central Asia and Mongolia.

Share on:
Which of LG’s products have been most successful in 2013? Given income levels and the general economic climate, people have generally lacked the disposable income to make numerous purchases of […]

Which of LG’s products have been most successful in 2013?

Given income levels and the general economic climate, people have generally lacked the disposable income to make numerous purchases of consumer appliances. Nevertheless, the television market—making up almost half of our business—in 1H2013 showed some signs of growth, rising 20% compared to the previous year. The home appliance market, meanwhile, performed slightly better than in 2012, while the mobile phone market also performed well on close to 30% growth.

Our market share is at about 40% in Kazakhstan, and has grown by roughly 3% when compared to 2012.

Where is your focus in the TV market?

The focus is on the premium segment, meaning Ultra HDTVs, which give perfect picture quality, but have a high price. However, we are working to customize these devices and within a year or so the price will be reduced. Until that time, we are focusing on Ultra HDTVs with a cost of 60% to 70% of OLED TVs. The OLED TV is a hot issue all over the world, and we are number one in that segment, with around a 3% market share.

LG recently released the LG Flex, the world’s first curved mobile phone. What are the benefits of the LG Flex for customers?

LG Flex is designed for the most effective reach from ear to mouth. An ingenious aspect of this phone is that the inside contains a battery, meaning that the entire device must be curved. This kind of battery is exclusively produced by LG. The final verdict, of course, always comes from the customer, and we are eagerly awaiting it.

LG intends to build a new manufacturing plant in the Alatau SEZ. How important is Kazakhstan in LG’s regional operations?

LG is the only company with a manufacturing facility here in Kazakhstan. By having a local factory, we can produce more customized products for the local market. Electricity fluctuations in Kazakhstan are much higher than elsewhere. Therefore, if we develop a product highly tolerant to such fluctuations, we will be able to customize each product specifically for Kazakhstan. The second reason is that we will also be able to export to neighboring countries. In 2012, we received the Altyn Sapa prize for achievements in the field of product quality from the President of the Republic of Kazakhstan, Nursultan A. Nazarbayev; this is the second time that LG Electronics Almaty Kazakhstan (LGEAK) has received this award.

LG’s global sales for mobile devices continue to rise. How has this been reflected in local sales?

LG was slightly late to the smartphone game, but it has invested significantly in engineering and technology, and our LG G2 devices have proven highly successful. We have another weapon too, which is the phone we have developed with Google—Nexus 5—which is very popular around the world. I expect a substantial increase in sales of the Nexus 5 and the G2 over 2014. Today, our product and technology is excellent and our customers are taking notice.

What is your view of the ICT sector in Kazakhstan?

I would say that the Kazakhstani market differs slightly from others. Consumers in Kazakhstan have a greater technological perception than many other countries, and this explains the swift take-up of smartphones. In 2012, the smartphone market was between 40% and 50%, but today makes up almost 90% of the market. Customers are eager to grab the latest technology, and that is why our strategy is not to be focused on the lower end of the technological spectrum, but rather the high end by offering the latest products. Kazakhstan’s swift adoption of the latest technology also encompasses Ultra HDTVs. I have spent eight years in India as well as some time in Egypt and the UAE, and I still conclude that Kazakhstan is highly promising for LG.

What are your mid-term plans for growth and development in Kazakhstan and regionally?

In 2014, we will change our strategy somewhat in terms of marketing and advertising; TV advertising has markedly decreased. People obtain much of their information from the internet now and have access to so much more of it. This is why we will focus more on web marketing to provide sufficient information to enable informed store shops, as internet purchases remain very low. Our aim is to pursue store design that enables customers to pinpoint relevant information as soon as they enter. Even though we have excellent displays today, the skills of our sales people are also of paramount importance, and we will be organizing structured training for our sales force.

Overall, I like Kazakhstan. Due to the wise management of the President and the work of the government the country has reached impressive results in a short historical period of time, and according to this parameter Kazakhstan and Korea are alike. My motherland also reached impressive results in a short time period and we have good perspectives on the nature of hard work, sense of purpose, creativeness, and patriotism of our nation and the political will of our President. I’m glad and feel responsible that in accordance with innovative technologies and the creation of new work places we can contribute to the prosperity of Kazakhstan—a successful, bright, and peaceful country—and contribute to the further growth of national welfare. This is a nation that can teach us many things. I would like to point out the role of the President of Kazakhstan, who puts every effort into creating an environment for broad economic growth, and who works to make conditions comfortable for investors. And I’m sure the goal set by Kazakhstan’s President of becoming one of the 30 most developed industrial countries in the world will be ­accomplished earlier than has been planned.