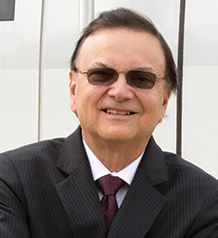 HE Roberto Roy has served as Minister for Canal Affairs, Chairman of the Panama Canal Authority Board of Directors since 2012, and CEO of Metro de Panamá since 2009. He holds a degree in Mechanical Engineering and a Master’s degree in Industrial Management from the Georgia Institute of Technology. He has a degree in Civil Engineering from Universidad Santa Marí­a la Antigua. He was President and founder of Ingenierí­a R-M and affiliates, one of the largest construction groups in Panama, established in 1975. As a member of the Blue Ribbon Engineering Committee (BREC), he recommended improvements to the waterway (1996-98) and these recommendations finally lead to the Panama Canal Expansion Program.

Share on:
With an investment of $2 billion, the metro is the second largest infrastructure investment in the country after de Canal. How is this benefitting the development of the country? The […]

With an investment of $2 billion, the metro is the second largest infrastructure investment in the country after de Canal. How is this benefitting the development of the country?

The contribution to Panama´s development starts with direct benefits to the residents of Panama City, where over 40% of the population of Panama works or reside. The specific benefits are travel time savings, savings in operating cost of private vehicles and public transportation, reduction in air pollution and reduction in traffic accidents. Benefits were quantified as part of the feasibility analysis under the scenarios with and without Line 1 of the metro, with the metro delivering between $150 and $190 million in yearly savings at the start of operations and growing to as much as $400 million by 2035. These savings mainly would translate into labor productivity, by reducing the burden of excessive travel time for daily transportation. In addition, the project generated direct economic benefits during its construction stage.

Line 1 was completed in 2014. How did the local population receive it, and what is your strategy to encourage people to uses this new system of transportation?

The best indicator of the population embracing the project has been the sustained growth in ridership. Line 1 is currently transporting 23,000 passenger per hour at peak demand, which is in line with originally projected estimates. Daily passenger demand, however, is over 50% higher than was originally estimated. In other words, the metro usage during off peak hours is significantly higher than expected. The metro’s strategy to attract users is to maintain a high level of service quality and to expand the rolling stock fleet to augment capacity over the short and mid-term.

What are the features of the existing line?

Line 1 has an overall length of 15.7 km from the San Isidro Station to the Albrook station. Currently the service is offered over a length of 13.7 kilometers of line and 13 passenger stations from the beginning of the line to the Los Andes station. The operation to the San Isidro station will start this coming August, increasing the number of stations to 14. Of the overall length, 7.2 km are underground; the same distance on an elevated viaduct and 1.3 kilometers is in trench. The system has been designed to transport 40,000 passengers per hour per direction, with a train configuration of 5 wagons running at a time interval (headway) of 90 seconds, which results in 40 train services per hour. Currently our service frequency is 20 trains per hour with a configuration of 3 wagons per train.

How will the expanded network of the Metro be integrated with the existing forms of transportation in the city?

Since we first defined the metro network in July 2009, the system has been conceived as a structural component of the integrated public transportation system of Panama’s metropolitan area. In parallel with the development of the Metro network, the restructuring of the traditional bus services began with the creation of the Metrobus service for the municipalities of Panama City and San Miguelito. The integration of the metro with the public bus transportation has three dimensions: the operational, the physical and the combined fare. In terms of the operation, the proposal is to restructure the public transport system toward a main line feeder type system, where the main corridors are served by the metro and the public buses provide feeder service and attend secondary corridors. The process has already begun in the corridor of the metro’s Line 1, where parallel services by the two systems have been minimized and new feeder routes have been created. Regarding the fare integration, both the metro and the buses share the same fare collection and recharging system with the use of smart cards that are interchangeable. The financial administrator is the same for both operators. Currently, integrated fares for both systems are being evaluated. Physical integration is progressing through the construction of passenger exchange facilities between the metro and the public bus system, and within the public bus system internally. Line 2 of the metro includes a major passenger station called UTP that will provide service to the nearby Tocumen International Airport, initially by means of a shuttle bus system and in the long-term with the use of an Automated People Mover directly linking the metro with the airport.