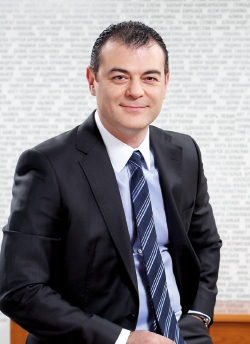 Serkan Eriş was born in 1971. He graduated from Dokuz Eylül University in Izmir with a degree in Public Administration and began his career at Efes Turkey in 1996 as a Sales Supervisor. Eriş spent some years in Romania with Efes before moving to European Telecommunication Holding in Germany to work as a Sales and Marketing Manager. He then moved to Kazakhstan to work with Efes as Sales and Marketing Manager and Sales Director, and is currently the Managing Director of the company’s local operations.

Share on:
What were the highlights and milestones for Efes in 2013? Overall, 2013 was an unusual year for the beer industry, and also for other beverages as well because we practically […]

What were the highlights and milestones for Efes in 2013?

Overall, 2013 was an unusual year for the beer industry, and also for other beverages as well because we practically did not have a summer in Kazakhstan. The summer months represent our core business, and the overall industry was negatively affected by the bad weather conditions. We still did well in 2013 compared to the overall industry. Our estimations suggest that the industry will decline by around 5% in 2013 compared to 2012. We succeeded in remaining with the same volume as in 2012, which was slightly better than the industry average. However, there were also some positive changes; the market is becoming more structured and richer in terms of brands. In 2013, almost 30 new brands/products appeared on the market, some of which were ours, while others belonged to our competitors. This was a good development for beer culture in the country, as consumers are becoming more aware of different varieties, tastes, and qualities. There are benefits. The competition structure has also changed. A new player joined the game, which is also good because this is like a pool and whoever contributes to the pool will help the overall beer industry.

Efes recently launched Zhigulevskoye unfiltered beer. What are some of the other recent and planned additions to the Efes range?

At the beginning of 2013, we integrated our operations with those of SAB Miller in Kazakhstan. This integration was completed at an earlier stage in Russia and Ukraine. It allowed us to start operating with SAB Miller’s portfolio in Kazakhstan, which is very rich and contains five important brands and many stock-keeping units (SKUs). Now, our portfolio is much richer. We have 13 brands in total and 64 SKUs—quite a large variety. We launched Zhigulevskoye in the second half of 2012 and it became a success story very quickly. There is an overall trend toward Zhigulevskoye because there is no player in the market that does not have a Zhigulevskoye brand today, which is almost the same for Russia. We can talk about it as if it is its own segment. Unlike other players, our Zhigulevskoye Razlivnoe is upper mainstream, not lower mainstream. First, we launched the lager type, and then we introduced the mild version, which is easier to drink. In summer 2013, we launched an unfiltered version, which was a first for the market. It is unfiltered with a different production style. When the bottle stays still it looks transparent, until you shake it. Consumers get the real taste when they shake the bottle as they pour the beer into a glass. This is a totally new product for Kazakhstan. Recently, we launched Kruzhka Svezhego Mild in a 250 ml bottle. It is unique with the slogan “immediate refreshment,” because you can consume it whenever and wherever you want since it is just several sips. Our goal is to create new consumption occasions, to move away from the idea that beer should be drunk in a specific location. This is a new category. At first, we were expecting mostly younger consumers to be interested in this product; however, overall demand is surprisingly quite wide. It has only been on the market for a short time, but has given us some very promising results already.

What were the best-selling beers in 2013?

Bely Medved is still the top selling beer in our portfolio; it represents almost 20% of the Kazakhstani market, followed by Kruzhka Svezhego, another one of our strong brands. It is the second largest brand in the market. Then comes Karagandinskoe, our local brand from Karaganda. Zhigulevskoye’s performance is also quite high. We have already reached almost a 5% market share with Zhigulevskoye in just one year, which is a fantastic result.

What trends have you noticed in the alcoholic beverages market?

One trend we have noticed is upsizing. Consumers are paying more attention to larger package sizes. We have launched two brands in a one-liter bottle, Karaganda and Zhigulevskoye, with successful results. The format is convenient and has sharing possibilities. That gives an advantage, especially for home consumption. We have also launched a smaller bottle, which serves more immediate consumption needs. Mild beer, alcohol-wise, is also becoming much more popular. It now represents more than 10% of the market.

Efes is active in regard to corporate social responsibility (CSR). How is the company working toward this goal?

Over 2013, we have started many projects that I am proud of. Saving the golden eagles was a highlight, and we continue to work toward this goal. We are collaborating with a state organization protecting eagles in Kazakhstan because it is considered the national symbol of the country. Another thing that made us very proud is receiving the Golden Heart Award, which is given to people or organizations that make significant investments in charity or show great social responsibility. Also, we are now very much focused on responsible consumption, and we have launched several projects in this regard. We have organized a team informing sales points about underage sales in Kazakhstan (under 21 years). We are voluntarily informing our clients to respect the regulations. Secondly, in 2013 we started an excellent project by signing agreements with some Horeca outlets to provide sober drivers for Efes drinkers. If you went out drinking and have a car, Efes Kazakhstan pays for a driver; it is a service that is appreciated. We also have distributed small devices with which you can check your own alcohol level. It shows if you are already over the drunk driving limit. In some outlets, we have installed larger, more sophisticated devices so you can check the alcohol rate yourself. In Karaganda, we have started social numerous projects with the local administration. There was a so-called “Babushka Pazaar,” where elderly women sold homegrown vegetables on the streets. Together with the city administration we have created a covered bazaar with stands so they have a place to sit and are protected from the rain and sun. We will continue such projects also in the future.

The government has noted that it intends to increase the excise tax on alcohol, initially regarding hard liquor, with low alcohol products to be considered in 2014. What is your view of this move and of government regulation of the market in general?

At the moment, we know that the tax on beer will not increase in 2014. The taxation on alcohol should not be made on the volume of product, but on its alcohol content. That is our argument, and we keep defending it. It seems that the government thinks and acts in line with this global trend. We know that taxes will increase for products with alcohol content of above 30%, and it will create a better consumer choice in the end.

Efes’ goal is to double business by 2020. What strategies will the company employ to achieve this goal?

We are still keen on achieving that goal, and are ahead of our targets. We believe that it may happen even earlier than 2020. Besides doubling our business, which was the vision in 2010, we also added another ambition: to be the most admired FMCG company in Kazakhstan. That encompasses everything from being an ideal employer to being a trustworthy partner to distributors and consumers. In all of this, we have project groups working on how we can improve our skills, and that obviously has a lot to do with the people of Efes. We have clear investments for training management and attracting new staff, while still engaging with existing employees.