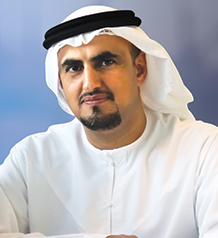 We’re On a Boat

Rashed Mohamed Al Hebsi has a diverse range of experience related to vessels from serving on board, to maintenance, ship construction, systems development, and project management. He graduated from the University of Miami with a BSc in Electronics Engineering, and served in the UAE Navy for 22 years, starting as a Marine Engineer Officer. Al Hebsi worked for two years with the French Navy and DCNS to develop the combat management system for the French Aircraft Carrier Charles de Gaulle. He also served as Project Manager in Stockholm for the UAE Navy’s Tarif Project, and in Rome for the Baynunah Combat System development project. Al Hebsi was part of the Abu Dhabi Class and Falaj II projects including being Project Manager in Genoa for two years.

Share on:
TBY talks to Rashed Mohamed Al Hebsi, CEO of The Emirates Classification Society (TASNEEF), on pioneer new work and environmental standards and the company's progress and achievements.

What led to the establishment of TASNEEF in 2012?

The concept of ship classification itself started 250 years ago to fulfill a requirement that was badly needed in the maritime industry. More than 12 classification societies have worked in the Middle East region; however, these societies have not provided customized services to meet the immediate needs demanded here. The UAE’s leaders saw a need to have a national classification society to fill certain gaps. TASNEEF is a nonprofit organization that acts as a third party on behalf of regulators and owners to provide inspection, surveys, certification, and consultancy services based on a non-conflict of interest. Part of the services that we have been providing are tailored to the region’s own unique needs, such as weather conditions including extreme heat, dense humidity, and dust, as well as shallow waters and the different types and lengths of waves. These factors impact the operation of vessels in the UAE and the region and have not been well considered previously.

TASNEEF has pioneered a new GCC code applicable to ships in the region. How is the code an improvement on current standards?

International Maritime Organization (IMO) regulations and conventions already regulate vessels above 500 tons, but for those vessels below 500 tons regulatory responsibility falls on the national authorities. Many authorities in different regions of the world are creating and adopting a national safety and environmental protection code for vessels. We have worked hard with the Federal Land and Marine Transport Authority (FLMTA) to adopt the GCC Code for those vessels that are not subject to the IMO standards. This will help better regulate the market, and make sure we have safer vessels. As a result, vessels will be more environmentally friendly with reduced emissions of dangerous gases, such as carbon monoxide and carbon dioxide. The code will control sewage with better treatment plans as well.

TASNEEF has signed a landmark partnership agreement with DryDocks World in collaboration with Dubai Maritime City to build the world’s first LNG-powered harbor tug. What is the significance of this achievement for the UAE and the global maritime industry at large?

There is significant pressure from the IMO to reduce the environmental impact of vessels and they have put in place certain targets leading up to 2035, whereby every five years we have to have a reduction in emissions. LNG as a fuel has zero emissions of dangerous gases. Because of this, the world is now moving toward LNG. Harbor tugs are used continuously in all ports in the UAE and have a direct impact on the coastal and nearby environment. The initiative to design, build, and operate an LNG harbor tug will significantly reduce the direct emissions of dangerous gases. This project is one of the projects that we are most proud of. The agreement has been signed and production will start during 2014.

What is your assessment of TASNEEF’s progress and achievements thus far, being one of the youngest classification societies in the world?

We are more dynamic, more technology-driven, and more energetic. In less than two years, we have achieved two awards. We were selected as the best classification society for excellence in maritime services within the entire region. We received a second award at the Sea Trade Maritime Awards for being the best classification society in terms of contribution to the development of the maritime cluster in the Middle East and Africa, including being an active partner with all stakeholders. The reason we were selected for this is because of the innovative solutions we have put on the table. Firstly, the Sahara Notation, and secondly our cooperation with all stakeholders here, especially the FLMTA, to implement the GCC Code promoting safety and environmental protection.