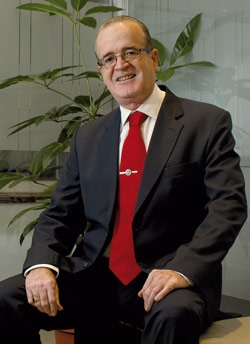 Share on:
"People have become more aware of natural gas thanks to its natural conditions and advantages against other hydrocarbons."

How extensive are Grupo Synergy E&P’s operations in Latin America?

We currently have operations in two different mature fields in Ecuador; one in the Santa Elena Peninsula and another in Eastern Ecuador at the Tiguino field. We also have operations in Colombia—a small condensate gas field for which we have been granted exploitation and operations rights for 20 years with a very ambitious investment plan. In Brazil, we operate in three different states: Bahia, Rio Grande do Norte, and Alagoas. Returning to Ecuador, we have recently renegotiated our contracts due to changes in the hydrocarbons law in 2010. These contracts are set to expire in 2016. In this regard, we are holding talks to extend one of the contracts, especially in the Santa Elena Peninsula, until 2029. This particular field is very mature, and it has been exploited for 100 years already. We currently produce 1,240 barrels per day (bbl/d). We have been operating in this field since 2002, with 1,463 wells and around 345 staff in that field. The new operating and investment plan for this field foresees a $56 million investment in order to drill approximately 30 wells before the current contract expires. At the same time, we are to carry 2D and 3D seismic studies that will determine future developments in the field. Regarding the Tiguino field, we have been operating there since 2004 and current production figures are 3,400 bbl/d with 13 productive wells and around 123 staff in that field. Thanks to high levels of investment in Tiguino, we have recovery levels of around 25%, which are above the average. Our exploitation contract in this field expires in 2016, and we are in the process renegotiating with the government to extend this contract with our company.

How significant is your investment in technology?

Technology is an essential part of our activities, either if it is our own technology or that of our partners. Therefore, to set a figure in terms of investment in technology would be difficult.

“People have become more aware of natural gas thanks to its natural conditions and advantages against other hydrocarbons.”

What are the company’s activities in natural gas?

In the last 20 years, people have become more aware of natural gas thanks to its natural conditions and advantages against other hydrocarbons. In addition, transportation techniques have improved dramatically and that has played a key role in making natural gas a worldwide commodity. Currently, the US is, thanks to the shale gas infrastructure developed over the years, the world’s leading producer of natural gas, and in terms of reserves overcoming even Russia. In terms of Ecuador, it has traditionally focused on oil, leaving aside gas. However, the government has realized the potential of this natural resource and it has already started investing in this area. For example, the government came to us to develop a pilot project to implement a fleet of 100 taxis run by gas. We are just waiting on licenses to start this project. We currently have one service station operating and we believe that thanks to this pilot project we could expand the overall number of taxis to up to 400 and build a new service station. We are also about to sign an agreement with Hyundai to provide it with natural gas for a number of other projects. The government’s main aim is to change the energy matrix in public transportation in the main cities of Ecuador in order to reduce pollution. In this regard, I would like to stress the commitment of our company to develop the natural gas industry alongside the government.

What role does natural gas play in your overall activities in the country?

At the time being, it is very minimal; however, we are sure that the pilot project will definitely boost the industry and increase the importance of natural gas in our portfolio in the country. I believe that public transport and the Ecuadorean industrial network represent a very promising target for the natural gas industry in this country, and hopefully, we will see the usage of natural gas increasing in the near future. Again, we are committed to contribute to the development of the Ecuadorean natural gas industry thanks to our know-how and expertise in the field at the international level.

What are the main activities the company is implementing in terms of social responsibility?

Over the last few years, we have strengthened our social responsibility activities toward the communities where the company operates. For example, not long ago we put together a book with the history, traditions, culture, and some pictures of the Waorani community. The book is available for sale and all the proceeds from it go directly to the community. Additionally, we also have workers from this community as part of our staff. Synergy Group E&P Ecuador is characterized by consistent respect to stakeholders, ethical behavior, transparency, accountability, the rule of law and respect for the principles of social responsibility embedded in the international standard ISO 26000:2010, on which we are working. Likewise, our support and respect for the universal principles of human rights, labor standards, the environment, and anti-corruption are expressed through the Global Compact initiative, which we are attached to from this year.

What are the challenges facing the hydrocarbon industry in Ecuador?

Both international players and Ecuador face the same challenges: government and local community relations with oil hydrocarbon companies and human capital. Therefore, I believe that the government’s legislation and legal framework should be more favorable, while we try to attract human capital into the industry and continue investing in new technology.

What should Ecuador do to capitalize on its potential to become a relevant hydrocarbon player worldwide?

The government of Ecuador should establish a better legal framework that attracts foreign players; it should not become a bureaucratic burden for companies coming to Ecuador. In terms of companies, we should make sure we do our work properly so that we gain the trust of both governments and local communities. We should further strengthen our commitment to the environment and the local communities in the country.

What are your future business plans?

We will take part in the many tendering processes in Brazil, Colombia, and Ecuador. At the same time, we will look into expanding partnerships with other companies. Additionally, in Cuba, where we have been working with the government for the last five years, we are considered an A-Class company—the highest level—and we have optimistic future perspectives to start exploitation work in the near future. In Mexico, we are also considering many potential activities. In Ecuador, we aim to become a leading player in managing mature fields within the natural gas industry.

What’s your general outlook for the Ecuadorean economy for the medium term?

This is a very attractive time for the entire Latin American region, as the particular cases of Ecuador, Colombia, or even Peru are proving. Ecuador needs to further attract foreign investment in order to boost growth and development, just as Peru and Colombia have been doing.