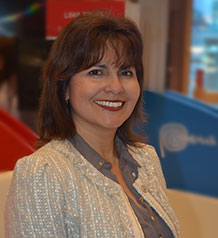 Maria Soledad Acosta Torrelly graduated from the Faculty of Communication Sciences, Tourism and Psychology at the Universidad San Martí­n de Porres. From March 2010 to August 2014, she served as Deputy Director of Domestic Tourism Promotion PROMPERíš. During her tenure, she developed and executed award-winning campaigns. She was appointed Director of Tourism Promotion of Commission of Promotion of Peru for the Export and Tourism in August 2014.

Share on:
"We are well positioned with Cuzco and Machu Picchu as the main cultural attractions."

What role does PromPeru play in promoting Peru internationally and domestically?

Our mandate is essentially the promotion of our country, both domestically and abroad. In recent years, domestic tourism has played an important role for our country and an increasing number of Peruvian operators have turned their attention to the domestic tourist. In the past, it was much less of an interesting market. However, since infrastructure and income has improved, so has the capacity to sell holidays to Peruvians. We don’t just promote, we also develop strategies to boost competitive destinations. On the other hand, we are focused on the diversification of Peruvian destinations. In this sense, our responsibility is not only to promote traditional destinations, but also to identify new and less-known alternatives. With regard to promotion abroad, we are focused on the Latin American market and the US. The latter represents 16% of the market.

How important is tourism from neighboring countries to your strategy?

Over the past year we have been working to increase interest among our neighbors Ecuador, Chile, and Bolivia. We have more than 800,000 Chilean tourists crossing the border annually. Most of them visit Peru because of health, commerce, and tourism. Gastronomy is also becoming an important attraction. Our advertising pool is focused on the north of Chile and southern Ecuador.

What are the biggest challenges confronting Peru in terms of tourism promotion?

The challenge is the diversification of our offer. We are well positioned with Cuzco and Machu Picchu as the main cultural attractions. We also have nature, beaches and a varied geography that allows for interesting adventure tourism. At the moment, we are focused on eight regions. In the south, Machu Picchu will always be the star. But we are else promoting aggressively Arequipa and Puno. Arequipa with the deepest canyons in the world, is our second city, and aside from international tourism, attracts the greatest number of domestic tourists after Ica. This city is also gaining attention because it is going to host five important international events, placing it in the International Congress and Convention Association (ICCA) ranking. In Puno, we have rural tourism due to the lake and we are hoping Tacna will become a gastronomy hub.

What efforts have you been making to promote domestic tourism?

Three years ago we were evaluating possible strategies to encourage Peruvians to take their holidays locally and all year round. We wanted to make traveling a habit, and years ago, Peruvians traveled regularly and then the numbers decreased because of internal problems. We wanted people to reengage with traveling and make it easy and stress-free. We started an online campaign called “¿Y tú qué planes?” in 2012. Today, the travel search-engine that we created for “¿Y tú qué planes?” is the second most used among travelers after Google in Peru. We worked with operators in each region to create accessible information. We won an award from the World Tourism Organization for the campaign and domestic travel in Peru grew 4% last year.

What makes Lima a good destination for MICE tourism?

Lima is an international hub in a privileged location. The capital city has great infrastructure and many international brands are attracted to the city. The cuisine is world class, and the city’s political environment is generally stable. The quality of services is respected and well known and infrastructure and investments in the city are increasing.

Yes, and not only in infrastructure, but across the board. Spain is one of the most important investors in Peru. The corporate sector is growing and flight connections are increasing. Lima is not the only destination attracting investor interest, as Tacna has done so, too.

We want to attract four million tourists to Peru. We have to consolidate markets such as US and Latin America, and will increase our work in these strategic markets through trade and campaigns. It is important to mention that there has been an increase in competition from regional states. We have to stay attractive in order to sustain growth at the same pace. We will keep working on innovative strategies and new products in relation to nature, adventure and culture depending on the demand of the different markets.