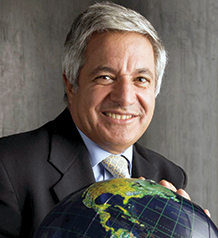 Welcome to the Jungle

Jean-Claude Bessudo was born in 1947 in Nice. After finishing his A-levels at Louis Pasteur French High School in Bogotá, he continued his studies at Solvay Mathematics Institute in Brussels and completed the High Company Management Program at Los Andes University. He has spent his entire professional career with Aviatur, starting in 1967-1970 as a personal board assistant. He was promoted in 1970 to President and Director General, a position he has held ever since. He authored a book in 2009, Improvised Strategy, and is the recipient of numerous honors and distinctions, including the Tourism Deserve Order, the French Government Deserve Order, and the Simón Bolí­var Democracy Order Deserve.

Share on:
TBY talks to Jean-Claude Bessudo, President of Aviatur, on the impact of macroeconomic changes on the tourism sector, identifying new opportunities, and measures to boost tourist arrivals.

How has the depreciation of the peso affected your performance?

Our activity is directly related to the exchange rate. A high exchange rate is the better for us because our expenses are in pesos while our income is in US dollars. Consequently, the situation has been good for Aviatur because people still spend to travel. In 2003, the exchange rate was at COP2,985 per one US dollar, and people still traveled. I do not expect demand to decrease. My view is that our currency has been overvalued. We had good sales in 2015, but taxes are still high in Colombia, which means 60% of our income goes to the government.

How many tourists does Colombia receive annually, and what is your outlook for the tourism industry?

Colombia received around 1.8 million tourists in 2014, the same as in 1982. The government says that by 2018 Colombia will have 5 million visitors who are not tourists. A tourist is a foreigner who stays overnight in another country. The government counts all visitors, such as people who cross the border from Venezuela to Colombia and back to their country, but that is a visitor and not a tourist. What matters is the number of tourists and, unfortunately, the image of Colombia abroad is still negative. Nearly 50 countries have travel warnings for their citizens coming to Colombia. Nevertheless, the peace treaty with the guerrillas will significantly improve that and could boost tourism in Colombia.

Does the image of Colombia abroad match the reality of the country?

Colombia’s image abroad does not match the reality and it is, in my opinion, a jewel in the rough in Latin America. The world needs to come to Colombia and discover the beauty of its landscapes, its nice people, and the excellent gastronomy. Customer service is excellent and the highlight of this country for the tourism industry is its people.

What segments in the tourism industry hold the greatest potential?

All of them hold potential. There are architectonical wonders, beautiful beaches, and colonial cities. Certain cities could be promoted overseas thanks to their astonishing colonial architecture, as Mexico has done with some of its cities. In addition, scuba diving is a segment that has seen huge growth in the country in recent years.

You have administered Tayrona Park since 2005. Do you plan to administer other national parks?

We have administered Tayrona Park since 2005, a temporary role with the aim to create the conditions for sustainable tourism in Tayrona. However, in the future we want to focus on the development of touristic projects on our own land in certain areas of the country. We do not want to continue participating in concession-held land, although it has been an interesting stage for the company. We have given back all the national parks that were on a concession and we are returning them to the government with excellent infrastructure.

What measures need to be taken, in addition to the peace agreement, to boost the tourism industry?

The tourist site Ciudad Perdida is virtually unknown. Barely 2,000 people travel there a year. It is a three-day trek; however, it is important to let the world know about this place. Furthermore, there are many beaches that can be improved and promoted overseas. Sometimes people complain about the lack of infrastructure and the poor quality of the roads, but to me that is an advantage because it makes driving around the country more attractive.