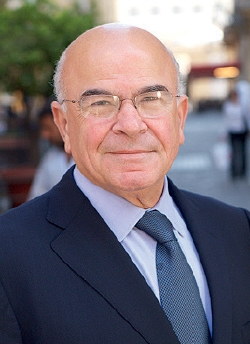 Maysarah Khalil Sukkar set up his first engineering company in Beirut in 1968. The civil war made relocation inevitable, and he moved his company to Saudi Arabia. He established a reputation as a turnkey contractor, with projects in bakeries, dairy plants, and petrochemicals plants, among others. Whilst working in Saudi Arabia, Sukkar also bought and operated some UK companies. In 1992, with peace restored to Lebanon, he brought the company home to aid in the country’s reconstruction. As business diversified, Sukkar launched averda Group, now one of Lebanon’s largest corporations. Sukkar holds a BSc degree in Communications Engineering from the San Jose State University, California, US.

Share on:
What have been the main milestones in averda’s progression to becoming one of the leading international waste management companies? Since the company was founded in the 1960s, I have invested […]

What have been the main milestones in averda’s progression to becoming one of the leading international waste management companies?

Since the company was founded in the 1960s, I have invested in technologies and quality engineering that help solve operational challenges and creates efficiencies. Our first focus as a company was on specific industries, especially food manufacturing. At the time, most factories in Lebanon were artisanal. Because the local market could not absorb the high capacities of professional production lines from the US or Europe, they made do with a combination of manual labor and sub-standard machines. Noticing this area of weakness, in 1965 I secured contracts to upgrade almost all of the food manufacturing plants in Lebanon as well as various projects in other fields in the region. This created a strong core in the company that still exists today.

What have been the main changes in the culture and business of waste disposal and collection that you have experienced in the last 30 years?

The main change we have experienced is the privatization of waste management services. Whereas the municipality itself used to control waste management, now it is increasingly outsourced to private operators. This has caused a fundamental change in the way the service is provided, in that governmental bodies are now both the client, utilizing the service from the private operator, and also the regulators, allowing for growth in the market. However, while the waste management industry has matured in Europe and North America, it has seen little change in this region. The duty of care principle, where every polluter is responsible for his or her pollutants, still lags behind international standards, and needs to be addressed urgently. We have partnered with regional governments for several initiatives that will hopefully yield fundamental changes in behavior, such as sorting at the source, pay as you throw, and hazardous waste collection.

You recently launched your first gas-to-energy project in Naameh. To what extent would you say this is a landmark project for averda?

This is indeed a landmark project for averda, where we have obtained permission to distribute electricity as a pilot plant, free of charge to the neighboring areas. We plan to do this in every region where we have a landfill in operation, as it reduces the reliance on polluting fuels.

How much of your total waste disposal is recycled?

We have a multitude of waste streams in our operations globally, ranging from household waste to industrial and construction waste. Many of the simpler wastes can reach over 70% diversion and recycling rates, while more highly technical waste streams require disposal as recycling them may cause harm.

You have recently expanded to Galway in Ireland with a $15 million investment in The City Bin. What was the motivation behind this investment?

Our investment in The City Bin Company was a strategic decision. First, Ireland operates a unique waste management model, whereby the individual chooses his or her waste collector; similar to the way you would choose a milkman. The relationship is direct between the client and the company, which is a strategic advantage that allows us to serve our ultimate client directly and learn his or her expectations and habits. Secondly, we now have access to a new talent pool that we can recruit from for our operations elsewhere.

Where else are you concentrating expansion efforts?

Our expansion efforts are focused primarily on the Middle East and Africa. We have been successful in pursuing this strategy, and plan to continue with it for the foreseen future. The population and economic growth in this region interests us, and we have skills that have been specifically designed and developed to cope with the complexity of operating in developing economies. We also can cope with the risk that such markets present.