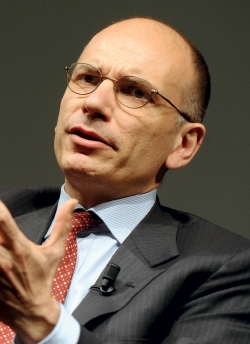 Enrico Letta was Prime Minister of Italy from April 28, 2013 until February 14, 2014. He has been a member of the Italian Parliament since 2001, aside from a period as a Member of the European Parliament from 2004 to 2006. He was Undersecretary of State to the Prime Minister of the center-left government led by Romano Prodi from 2006 to 2008. He served as Minister for EU Affairs (1998-1999), as Minister for Industry, Commerce, and Crafts (January-April 2000, during the second D’Alema government) and as Minister for Industry, Commerce, and Crafts and Foreign Trade (2000-2001, during the second Amato government). From 1993 to May 2013, he managed an independent think-tank, Arel, founded by the late Beniamino Andreatta. He was also Vice-Chairman of Aspen Institute Italia, President of the Italy-Spain Dialogue Forum, and a member of the Trilateral Commission.

Share on:
What advantages does the UAE offer Italian investors, and what other sectors are appealing for Italian companies? Italy has a growing community of entrepreneurs in the UAE, and it also […]

What advantages does the UAE offer Italian investors, and what other sectors are appealing for Italian companies?

Italy has a growing community of entrepreneurs in the UAE, and it also has the opportunity to strengthen its ties with the country, and this will materialize in economic deals with their economic partners in the Emirates. I was very happy to hear the declaration about Alitalia and Etihad’s potential partnership, and this was one of the main subjects of discussion during the latest meetings in the UAE. The conclusion was positive, and we will do our part in the best way possible. In Italy, all concerned parties will contribute to work toward a positive outcome for this agreement. I think it is important that every single concerned party takes their place. What we have done during our visit is very positive for both Italy and the UAE. Italy is now a country that must attract new investors. We hope that we can get the attention of our Emirati counter parties.

What will be the focus of bilateral relations in 2014 and over the medium term?

I can say that, as far as I am concerned, this visit set the basis for this strategic partnership for the years to come. I very proudly explained to my Emirati counterparts that Italy has come out of the financial crisis by its own capability, without asking for funds or any bail out from the EU. When we are in trouble, we emerge from troubled waters under our own strength and capabilities. We will continue our strategic partnership. We found in Dubai and Abu Dhabi a great interest in Italy, and the negotiations regarding Alitalia is also proof of this. We have set a strategic course with a perspective that is not just based on sporadic meetings or agreements, but today we can say that we have created strategic cooperation between the UAE and Italy. There is wide, strategic cooperation between both countries.

How will the experience of the Milan Expo 2015 serve to help the UAE, and Dubai in particular, assist in the staging of Expo 2020?

The World Expo is one our main links. There will be one held in Milan in 2015, while Dubai’s will be held in 2020. We have always supported Dubai’s nomination for the Expo. We will help to create a firmer level of investment with the Expo. It is a fundamental element for us. Of course, this visit to the UAE is aimed at strengthening the cooperation between both countries at a strategic level. The World Expo will lead to further cooperation between our two countries. We are able today to help the UAE and the Dubai Expo team avoid many mistakes. We worked very hard in the early years, and we want the UAE to avoid some of the mistakes we experienced when preparing Milan Expo 2015. We had a session on the post-Expo plans, and we were very impressed to see that the Dubai team was already considering plans for the post-Expo scenario.

What is your economic outlook for the UAE, and how do you envision future relations between Italy and the UAE?

Our visit was a great success. The agreements we signed during our visit to the UAE were very important. Expo is a great opportunity for both countries to meet and share experiences. It is a long journey. As far as I am concerned, I found a great reception from the people, and my story about Italy wanting to open up to new investors and that Italy wants to attract investment from abroad was well received. There is already a process of privatization underway in Italy, so it is an ideal opportunity for investors to get involved. I have introduced the sovereign funds of Abu Dhabi and Dubai to Italy’s privatization plans. The reaction I gathered directly will bring very positive returns in terms of investment for Italy.