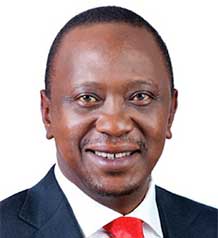 HE Uhuru Kenyatta was sworn in as the fourth president of Kenya in 2013, following the victory of the Jubilee Alliance. After a start in business, Kenyatta turned to politics in 1997, entering parliament as a nominated member in 1999, and the cabinet as Minister for Local Government in October 2001. In 2002, he was elected one of the KANU party’s four national vice-chairs, but lost to Mwai Kibaki in the presidential election, and subsequently served as the Leader of the Opposition. He was appointed Minister for Local Government in January 2008 in Kibaki’s presidency, going on to serve as Minister for Finance and Deputy Prime Minister until 2012.

Share on:
"Oman therefore presents a huge potential market for Kenyan products, including beef and other by-products, nuts, tea, coffee, and flowers."

As the largest East African economy, how can increased cooperation with Oman bring mutual benefit to both countries?

Kenya is strategically placed within the East and Central African region and accounts for about 40% of the region’s GDP. More than that, we are a gateway to the region and therefore provide a direct link to a potential market of 170 million people within the East African Community. We are already quite well integrated within the region, having one of the most vibrant common markets. Increased cooperation between Kenya and Oman would allow Oman not only access to the region, but also the growing Kenyan market and the improving investment environment. With a projected GDP growth of 5.9% in 2016, the Kenyan economy provides enormous opportunities and potential for mutually beneficial business interactions between the two countries. In line with growth of 5.9% in 2016, the Kenyan economy provides enormous opportunities and potential for mutually-beneficial business within the region. Specific areas of interest to business include eco-tourism, power generation equipment, road construction, telecommunications equipment, food processing, cement production, motor vehicle parts, and agricultural inputs, among others. Kenya intends to enhance cooperation with Oman in these and other sectors for mutual benefit, as both countries continue to diversify their economies. For instance, having only discovered oil recently, Kenya could benefit from Oman’s experience in this sector. Kenya also works closely with Oman in the multilateral arena, particularly within the context of South-South cooperation and shares the ideals of peaceful resolution to conflict. Our two countries have continued to benefit from people-to-people interactions and cultural ties, which have helped to shape relations in all other sectors.

How are you working to attract visitors to Kenya?

Kenya is home to some of the most diverse wildlife in the world, including being home to the spectacular annual wildebeest migration in the world-famous Maasai Mara National Park, and various non-wildlife attractions. Kenya has identified the need to create more product awareness about the distinct tourism attractions and to attract more visitors from the GCC region. In this regard, marketing development representatives were appointed to market Kenya product awareness, and also actively participate in regional tourism expos, such as the Arabian Travel Market in Dubai, and hosted our own Magical Kenya Travel Expo in Nairobi in October, 2016, in which travel agents from the GCC were invited to participate. In addition, Kenya has launched the “Yalla Kenya“ campaign, which specifically targets the GCC region. The campaign, which means “Go Kenya,“ has been launched in the UAE and is expected to be rolled out across the rest of the bloc. Kenya and Oman have a rich cultural and historical affinity, with the coast of Kenya having strong historical ties with Arabs from across the Gulf of Aden, which saw the introduction of Islam by Omani traders along the coast of Kenya. With approximately 11% of the population of Kenya (over 4.5 million) being Muslim, Omani travelers feel at home as halal food is available everywhere, mosques are located in all parts of the country, and the Kiswahili language is widely spoken. Major airlines including Kenya Airways, Qatar, Etihad, Emirates, and Air Arabia provide seamless connections between Kenya and Oman. The impending commencement of direct flights from Muscat to Nairobi in 2017 will provide a big boost to Kenyan ties with Arabs from the GCC region. The presence of the Embassy of Kenya in Muscat ensures that the process of issuing visas is much faster. Despite this, the number of tourist arrivals from Oman and the GCC has not been as high as we would want them to be. We intend to escalate our awareness campaign and strategy toward increasing the inflow of tourists from the region.

What are some of the efforts currently undertaken by the governments of Kenya and Oman to maintain the safe passage of maritime trade in the coastal areas between Kenya and Oman?

The maritime sector plays a significant role in the social and economic development of Kenya. Maritime transport, tourism, and fishing are key. Kenya is in the process of developing an integrated and cross-sector maritime policy to help accelerate economic growth. Similarly, and in recognition of the importance of the maritime sector within the African continent, the African Heads of State and Government adopted and signed the African Charter on Maritime Security, Safety, and Development in October 2016. Several years ago, piracy and armed robberies against ships were rampant along the Western Indian Ocean and Gulf of Aden, arising from the on-going conflict in Somalia. This posed a threat to people and to the general peace in the region and beyond. As active members of the Indian Ocean Rim Association for Regional Cooperation (IOR-ARC) and the International Maritime Organization (IMO), Kenya and Oman have been working closely in the promotion and protection of interests within the Indian Ocean and in pursuing maritime safety and security issues. The two countries are similarly in the process of concluding a MoU between Salalah Port Services and Kenya Ports Authority, which is aimed at enhancing cooperation between the two major port cities within the two countries and improving their economic and strategic cooperation. We recognize that Oman has a long and successful maritime history and will continue to work together in order to benefit from their invaluable experience, as we seek to develop and safeguard the blue economy.

Oman and Kenya enjoy strong historic and traditional ties. How does Kenya view Oman as a strategic partner in the region to access markets in the GCC and greater Middle East?

Kenya and Oman have traded for centuries and our diplomatic relations go way back, making Oman one of Kenya’s strategic partners in the GCC. Trade has been expanding over time, although it is not at the level that both countries wish to attain. Oman therefore presents a huge potential market for Kenyan products, including beef and other by-products, nuts, tea, coffee, and flowers. Our countries are exploring ways and means of opening more avenues of cooperation to be able to achieve this. Among these strategies is to increase the direct interaction between our two Chambers of Commerce and Industry, in order to deepen people-to-people interaction and enhance our trade, business, and investment ties. Salalah is widely acknowledged as the eastern gateway to the GCC, while Mombasa is the gateway to Eastern and Central Africa. The proximity of Salalah to Kenya and to eastern and central Africa allows for the facilitation of trade in goods between the two countries and their respective regions. The development of the Salalah Free Zone provides an opportunity for Kenyan investors to add value to Kenyan products within the Sultanate and to access preferential markets within the GCC. Cooperation between our two ports will ensure their development into regional logistics hubs. We are keen to improve the movement of people, goods, and services as a means of attracting further investments and increasing trade volumes between our two countries. In this regard, we will support any efforts by our national carriers to resume flights on this route.