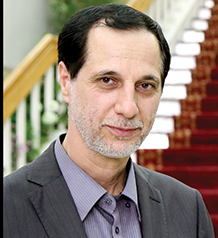 Rahmatollah Mahabadi has been the Chairman of the Board and CEO of Iran Airports and Air Navigation Company (IAC) since February 2015. He holds a PhD in DBA and a master’s in public management. During his long experience in the aviation sector, he has been the Director General of Procurement in the Civil Aviation Organization, Deputy Director of Marketing of Iran Aseman Airlines, Director General of Marketing and Investment of IAC, Member of the Board and Deputy CEO for Airport Operations, as well as Deputy CEO for Planning and Monitoring, and Deputy CEO for Resources Development and Management of IAC.

Share on:
TBY talks to Rahmatollah Mahabadi, Chairman of the Board & CEO of Iran Airports & Air Navigation Company (IAC), on developments in Iran's aviation industry and new investments in airport expansions.

How have Iran’s aviation industry and IAC developed over the years?

Iran established its first airport in 1922, and the first Iranian pilot landed at Ghale-Morghi airfield in 1926. Iran is one of the first signatories of the Chicago Convention. The most important changes in the airport industry came after the Islamic Revolution in 1979. IAC became independent from the Civil Aviation Organization (CAO) in 1999, which was the first indication of the commercialization of the aviation industry. Today, IAC manages 54 airports and offers a full scope of navigation and airport services within the Iran airspace. IAC is a unique company in Iran and the exclusive provider of air navigation services. We have 7,000 employees all around Iran and have the best locally trained air traffic controllers in the region, which could be our differentiator to be successful in the future. In the engineering sector, despite the sanctions, we have been able to perform our duties because of our qualified and skillful engineers. We have been operating independently and have successfully developed our own system. The Iranian aviation industry is relying on internal technologies and resources, especially human resources. We have managed to develop despite unjust and illegal multilateral sanctions for more than three decades. We are open to use modern technologies and capable of being a great partner for international companies; our human resources are capable to work abroad with international communities as well.

How do you assess the status of Iran’s airports, and how do you reflect on the need for investments to upgrade infrastructure and equipment?

Iran is located in a geopolitically important region, between Europe and Asia Pacific, and has the potential to be one of the most important aviation hubs in the world. Iran is a vast country and has economically optimum airways between Europe, Middle East, and Asia Pacific cross over its airspace. In addition, we want to establish Iran as a transit hub, where we can also provide maintenance, repair, and operations services. Iran has 54 airports and 80% of air traffic activities are concentrated in eight major airports. We recently experienced a two-digit increase rate in aircraft movement in these airports, and these airports are going to be overloaded. We want to upgrade our existing infrastructure. This includes terminals, runways, equipment, and even constructing new airports. We also seek to improve our air navigation system equipment. For instance, Mehrabad International Airport experienced 19% growth annually. We have planned to develop the infrastructure and establish new airports, for example in Bandar Abbas and Bushehr, where there is no possibility of expanding the current airports. We also have planned to construct a large airport in Chabahar, one of the important port cities of Iran, and the international tender announcement for this project is going to be conducted soon. IAC will expand into a holding company to oversee other business units in the form of joint ventures with international companies. The first such experience will be at Mashhad International Airport, where we have planned to construct a new terminal in partnership with an international company. We have formalized agreements with European companies and are working on a contract to develop the airports. IAC invites all international companies to capture and exploit the unique opportunities of investment in Iran’s airports and air navigation market, which offers significant returns.