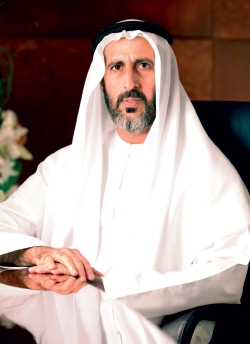 HE Saeed Fadhel Al Mazrooei has been President and CEO of Emirates Aluminium (EMAL) since 2010. He holds a degree in Mechanical Engineering from Gonzaga University in the US, and later obtained a Master’s degree in Gas Engineering and Management from the University of Salford. He previously worked at ARCO Dubai for 17 years, where he held key management positions. He also spent time at UAE Offsets Group in positions of increasing seniority. In addition to his current role, he is a Board Member at Dragon Oil and a member of the Audit and Risk Committee at the Emirates Nuclear Energy Corporation.

Share on:
TBY talks to HE Saeed Fadhel Al Mazrooei, President & CEO of Emirates Aluminium (EMAL), on the aims of the joint venture, the Khalifa Industrial Zone Abu Dhabi, and forecasts for the aluminum sector in the Middle East.

How has Phase II expansion progressed?

The Phase II expansion is already well ahead of schedule. In September 2013, the First Hot Metal (FHM) was cut into the first pot of the line, which is the longest single pot line in the world at 1.7 kilometers. FHM was delivered three months ahead of schedule. Once completed the total annual production capacity will rise to 1.3 million tons, making Emirates Aluminium (EMAL) one of the largest single-site aluminum smelters in the world. The construction of Phase II has exceeded the already exemplary standards achieved in the construction of Phase I, setting new global industry records in the process. Phase II has achieved FHM a full four months faster than Phase I, delivering 20% more value in dollar/ton investment, whilst maintaining an incredible zero lost time through injury (LTI) record representing 40 million man-hours of work done, which is testament to the strength of our commitment to “safety first, last, and always.” Taking just two years, it is also the fastest time in which any aluminum smelter has reached FHM.

What does this mean in terms of scale, engineering innovation, and special industrial achievements, including UAE-developed reduction cell technology?

Completed three months earlier than scheduled, the milestone FHM marks the start of production for EMAL’s Phase II, as it heads toward a total production of 1.3 million metric tons of aluminum a year. Reaching FHM safer, faster, and better not only exceeds the successes achieved in Phase I, but highlights the ability of Emirati excellence to set new industry standards on a global scale. The achievements of Phase II are impressive. Stretching 1.7 kilometers, EMAL Phase II has the longest pot line in the world, consisting of 444 reduction pots built with Dubai Aluminum (DUBAL) for their cathode bus ring. Using DUBAL developed DX+ technology, Phase II operates with the highest amperage in the region at 440 KA, which is built to creep in the future to reach 460 KA. Among its world leading credentials, EMAL now possesses the largest single site production capacity at 1.3 million tons of aluminum/year; the world’s longest pot line ever built; the world’s largest gas treatment center; the world’s biggest anode baking furnace; the biggest single-site captive power plant; the highest single line capacity green anode manufacturing plant; and is the first to use 2,000 V rectifier/transformers. EMAL also has one of the largest single-site cast houses, with a 1.65 million ton/year casting capacity.

How has the sophistication of logistics services at Khalifa Port helped meet the deadlines of this project phase?

On the occasion of the official inauguration of Khalifa Port by Abu Dhabi Ports Company (ADPC) in December 2012, we embarked on a new era in EMAL’s contributing role to the diversification of the UAE economy, making the first export shipment of finished product to international customers from our dedicated EMAL berth in Khalifa Port. The milestone export of 28 shipping containers of finished standard ingot products left the port to EMAL customers in Japan and Vietnam. EMAL currently supplies over 150 customers around the globe with high-quality, ISO 9001 certified aluminum, which is available as sow, standard ingots, sheet ingots, foundry ingots, and extrusion billets. Sow and standard ingots are traded on the London Metal Exchange. First opened in November 2010, the purpose built EMAL wharf at Khalifa Port has enabled delivery of raw materials directly direct from sea to smelter. To be shipping quality Emirati produced aluminum using Emirati-developed DX+ Reduction Cell Technology direct from the smelter via a dedicated berth places us in good stead to further establish EMAL as a major new player in the global aluminum market.

The price of aluminum hit a four-year low when it dipped below $1,800 a ton in late June 2013. What effect did this have on the implementation of Phase II, and what are your expectations for demand and pricing over the next five years?

In 2012, primary aluminum production by GCC smelters was at 3.6 million tons, which constituted around 8% of total world production. GCC countries are consolidating their leading position primarily by increasing their annual productivity and adding new capacity, while adopting the latest advanced technologies. Production capacity in the region is set to rise by 40% to almost 5 million metric tons by 2015 and this trend is set to continue with forecasters estimating the GCC will be responsible for almost one-fifth of the world’s aluminum production, excluding China, by 2020. This increased capacity will help meet the expected growth in demand for aluminum, which is forecast to rise by 6% year on year over the next decade. Current annual demand for aluminum is at 40 million tons; this is estimated to exceed 70 million by the year 2020. EMAL is well placed to meet the future demand for aluminum internationally, regionally, and locally.

What is EMAL’s approach to the environment, energy conservation, and what technology does it employ to minimize emissions?

EMAL has been committed to preserving the environment since its inception, embracing the protection of the environment as one of its core values. The tone of our approach was decided from the outset when we conducted a translocation exercise of local flora and fauna before construction started. We also go beyond what is merely required and voluntarily conduct activities such as the constant monitoring of the sea temperature close to the smelter. Our key initiatives in pursuit of this core value include: use of the best available technology; encouraging all employees and contractors to comply with EHS policy; creating a culture of environmental awareness for all business activity; and reducing waste and energy use. EMAL has invested more than $700 million in state-of-the-art technologies in Phase I for reducing emissions. As a result, only 13% of waste is sent to landfill, while 46% of all hazard waste is recycled. Roof vent emissions are below EIA range and in 2012 hydrogen fluoride is at 0.07 kg/ton (compared to minimum requirement of 0.12) and total fluoride emissions are 0.13 kg/ton (compared to minimum of 0.18). EMAL complies with all applicable environmental legislation and committed to European standards.