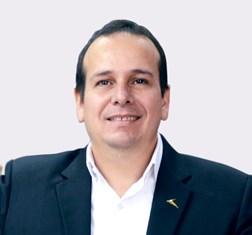 Octavio Pérez is from Colombia and has vast experience in the aviation industry, having obtained various trainings in the field of aircraft design. Prior to joining TAME, he obtained additional experience in aeronautical management, serving in various executive roles for Airbus in Latin America and the Caribbean.
He also worked for Airbus’
head office in France.

Share on:
After losing 1 million domestic customers since 2012, TAME has made a strong comeback on the back of government support and new aircrafts, reaching 80% seat occupancy rate in 2018.

How have TAME’s operations advanced in recent years?

TAME flies to 11 national and five international destinations. Our market share for local and international flights is 40% and 30%, respectively. Our goal is to recover the 95% national market share we had before. To achieve this, we work with the Ministry of Tourism and the Ministry of Transportation and are restructuring our company and analyzing what is best for us, including better financial management. Our balance sheets had never been audited before TAME became a public company in 2012; an audit of the entire financial process allowed us to better determine the company’s debts and the source of its liabilities. We went through operational restructuring and have refinanced and renegotiated our liabilities with our suppliers. In September 2017, TAME had only four aircrafts and today, we have already purchased 10 of the 11 aircrafts that we planned to have by end-2018; they will be delivered in January 2019 due to some issues. In the meantime, we have recovered operation and frequency and our average seat occupancy rate in 2018 is 80%. In addition, we are focusing on providing higher quality service. For perspective, we have 95% punctuality and 95% predictability rates.

What is your balance between tourism and business movements?

As a flagship airline, TAME’s priority is to reach more destinations. Certain destinations, like the Galapagos Islands, have grown in popularity largely due to efforts by the Ministry of Tourism. On top of this, the Ministry of Transport has been active in developing airports throughout the country, making it easier for us to increase our routes. We have increased the frequency to such destinations from Quito or Guayaquil as well as between Quito and Guayaquil and Loja—the city of art. This is part of the development of tourism in those areas because it brings economic advantages. Also, the aviation industry creates employment in the transport, food, business development, and digitalization areas. We are actively digitalizing our sales channels, and the current ticket purchase software is partly developed internally.
What is your ambition to grow in the domestic market, for example for the Galapagos and other tourist destinations?
The state is committed to developing many of the country’s airports. To this end, the Ministry of Transport and Authority for Civil Aviation has formulated a plan. Many of the airports that TAME operates without competition are new, which increases the quality of service and safety. New or renovated airports such as Lago Agrio on the border with Colombia are part of the commitment to develop these regions. We use those airports, and we have created special rates for residents to boost the productive development of the region. TAME Amazonia is a subsidiary of TAME in the Amazon jungle to service inhabitants of that region. The subsidiary does not have an economic function beyond its service to the indigenous communities.

What are your plans for further regional expansion, and what investments in your fleet would that require?

As part of the company’s restructuring plan, we need to define the necessary fleet for the next five to 10 years. We have decided to change the fleet, models, and destinations. Regionally, we fly to Lima, Bogotá, and Cali as well as other routes that were cancelled, but we want to resume them under the new business model. To consolidate this project, we need investment that allows us to renew aircrafts with new generation equipment. We have interlinear agreements with Avianca, and Aerolí­neas is also interested. Similarly, we have a commercial agreement with United Airlines, which acquired our cargo hold for New York.

What are your expectative and ambitions for 2019?

We want to consolidate the company, renew the fleet, maintain routes and connectivity, generate strategic alliances, and have a self-sustaining model. We want to be the local distribution network of companies that want to come to Ecuador. We have strong competitors, though we are fighting, and we expect to regain 1 million passengers we lost in Ecuador since 2012.