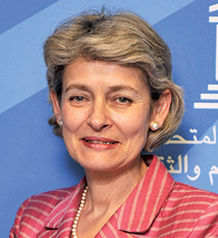 Irina Bokova, a national of Bulgaria, has been the Director-General of UNESCO since November 15th, 2009, and was successfully reelected for a second term in 2013. She is the first woman and the first Eastern European to lead the Organization. As Director-General of UNESCO, Irina Bokova is actively engaged in international efforts to advance gender equality, quality education for all, and combat the financing of terrorism by preventing the illicit traffic of cultural goods. A leading champion in the fight against racism and anti-Semitism, Bokova has spearheaded UNESCO’s activities on Holocaust remembrance and awareness and is the first Director-General of the Organization to appoint a Special Envoy for Holocaust Education. In addition to her mother tongue, she speaks English, French, Spanish, and Russian.

Share on:
TBY talks to Irina Bokova, Director-General of UNESCO, on the organization's campaigns to protect and promote Lebanese heritage, expand educational programs in the country to serve Syrian refugees, and celebrations for UNESCO's 70th anniversary.

What is the importance of UNESCO’s recently launched #unite4heritage campaign in Lebanon, in terms of raising awareness and increasing protection of diversity and cultural heritage threatened by violence and sectarian discourse?

In May 2015, I visited Lebanon and seized the opportunity to launch the #unite4heritage campaign in the National Museum of Beirut, which is a symbol of the greatness of this region and its diversity. In reaction to sectarian propaganda, this campaign uses the power of social media to create a global movement to support the protection of cultural heritage. To fight violent extremism, we must stand together and show that all cultures are linked, while explaining the value of heritage and resisting all forms of hatred. UNESCO relies on Lebanon to take this campaign forward with its unique social fabric and uncompromising defense of freedom of expression and with its committed and educated young people. Lebanon has already proven its commitment to peace by receiving hundreds of thousands of refugees as neighboring conflicts wreak social and economic havoc, and has also played a vital role in the fight against the illicit traffic of cultural property.

What steps are being taken to strengthen the work of the UNESCO Office in Beirut?

We have recently launched a new project, “Enhancing Access to Secondary Education and Quality Results for Youth Affected by the Syria Crisis (EASE initiative),” as part of UNESCO’s new strategy called “Bridging Learning Gaps for Youth.” By collaborating with the Ministry of Education and Higher Education, UNESCO Beirut Office will support tuition for more than 1,500 secondary education students that will also benefit of preparatory and remedial classes. At the same time, teachers and administrators will benefit from capacity development activities with a focus on psycho-social support, inclusive education, ICTs in education. In collaboration with the ministry, UNESCO Beirut Office has also been implementing the Accelerated Learning Program (ALP) to reintegrate out of school children in Lebanon. In the context of the UNESCO Regional Project on Cultural Dialogue funded by Saudi Arabia, the Beirut Office has implemented several capacity building activities, including the coaching of certified trainers on dialogue skills, and developing a credit based University Course now adopted in six Lebanese universities. UNESCO-Beirut Office and the Council for Development and Reconstruction signed an agreement to provide advisory services and high-level technical assistance to the Directorate General of Antiquities at the Ministry of Culture. UNESCO will monitor the execution of archaeological works in the World Heritage sites of Tyr and Baalbek, respecting their outstanding universal values, integrity, and authenticity. In the same context, prioritizing youth concerns is a key objective for UNESCO in Lebanon. UNESCO is integrating youth priorities in all its programs, and is trying to build an effective partnership with them.

What activities and events will be launched in Lebanon in the framework of the organization’s 70th anniversary?

The celebration of UNESCO’s 70th anniversary will honor the organization’s achievements and actions throughout the world to strengthen the foundations for lasting peace and sustainable development, through education, culture, sciences, information, and communication. The Lebanese National Commission is organizing a series of activities in December. An international conference on “Safeguarding heritage and cultural diversity in times of crisis” will be organized at the UNESCO Palace in Beirut along with a series of events taking place at the closing ceremony. Students of UNESCO associated schools will present a show featuring folkloric dances from all five continents and songs illustrating the values of UNESCO. There will be an exhibition of drawings around the theme “Describing UNESCO,” and a competition will be addressed to university students on producing a documentary about the Organization. Other initiatives include a painting seminar on the themes and values of UNESCO and a culinary festival.