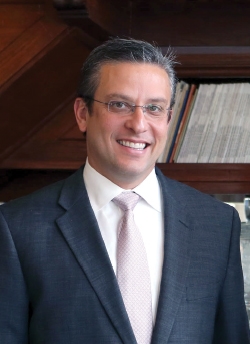 Alejandro Garcí­a Padilla was born in 1971 and attended college and law school in Puerto Rico before clerking on the Appellate Circuit, serving as a legislative aide, directing the Association of General Contractors, and practicing law at a well-reputed firm, focusing on contracts and real estate. He went on to serve as Secretary of the Department of Consumer Affairs, where he championed the rights of ordinary Puerto Ricans. His work kept gas prices in check during critical periods of the Iraq War, with the Commonwealth having the lowest prices of any US jurisdiction, despite international turmoil and the higher costs of bringing fuel to an island market. In 2008, Alejandro was elected to the Commonwealth Legislature with the most votes of any senator from either party. In 2011, after announcing his intention to run for Governor of Puerto Rico, he was unanimously elected President of the Popular Democratic Party.

Share on:
What are some of the key measures that Puerto Rico and the Dominican Republic have taken to strengthen bilateral ties in fields such as maritime and air transportation? Both our […]

What are some of the key measures that Puerto Rico and the Dominican Republic have taken to strengthen bilateral ties in fields such as maritime and air transportation?

Both our countries have enjoyed continued collaboration and cooperation over the past few years. For example, President Medina attended my official inauguration. The ties between our nations are historical, and have transformed over time. During the first half of the 20th century, many Puerto Rican people moved to the Dominican Republic seeking employment. This trend was reversed in the second half of the century due to the evolution and progress of our economy. We have set up joint industrial projects; production plants in the Dominican Republic receiving goods and products that are initially manufactured in our country. Currently, President Medina and I have decided to explore opportunities for both countries and create new synergies to further strengthen our economies in the international arena. Puerto Rico has strong air transport connections with the US, whereas the Dominican Republic enjoys more consolidated air connections with South America. This is something we can both benefit from. Air Europa recently launched a two-flight per week route connecting San Jose with Spain, and we aim to have an extra daily flight connecting us with the Dominican Republic to create even better connections with Europe. On top of that, Lufthansa is set to open a maintenance and repair center for the region in our country. This center will be open to other carriers too, and we are 100% convinced that this will help to create additional synergies between both countries.

What is behind Puerto Rico and the Dominican Republic’s plan to purchase oil together?

There have been talks already, but we have agreed on nothing thus far; Puerto Rico has more economic energy costs than the Dominican Republic. The idea would be to make joint purchases of oil, so we can have a stronger position when negotiating. Talks have also addressed the construction of an underwater energy cable to better exchange energy that has already been produced.

What other sectors offer the greatest potential to boost bilateral cooperation?

Agriculture is one of the main sectors offering bright future prospects to boost commercial ties. Both countries understand this, and have in the past few months taken steps in this field. We are actively increasing the area of farmed land, and value Dominican expertise in several areas. For example, we have started cultivating rice—in 18 months we have gone from 0 acres to more than 600 acres under cultivation. We have also increased sugar cane crops, and plan to reach 20,000 acres in the next few years having started from scratch almost two years ago.

“ President Medina and I have decided to explore opportunities for both countries and create new synergies to further strengthen our economies. “

Apart from the pharmaceutical industry, what are some of the other strategic sectors your government aims to further develop?

We are in the process of diversifying our economy. Agriculture and textile manufacturing have been two traditionally strong sectors in Puerto Rico and we believe we need to revive them. Chemical products and medical devices are two segments with the potential to boost the diversification of our economy. Today, 48% of our economy depends on manufacturing activities and we know that we must diversify this for greater economic success. In this context, we have taken positive steps within the aerospace industry, as exemplified by Lufthansa. These efforts have also enabled us to attract software production activity related to this industry. The main multinationals in this sphere are present in Puerto Rico, which is significant. They create many job opportunities for our people, and fortunately, we have seen a shift toward research and development in our economic activity as a country. Innovation is playing an important role today. The impact of tourism activity in our economy is considerably rising, and the number of tourists is increasing with each passing month. We attract many cruise companies into the country, while over 1,000 additional beds will shortly be included in Puerto Rico’s touristic offering. Meanwhile, in terms of security we have reduced crime rates by over 20% since I began my tenure as Governor.

What have been your landmark achievements since you took over as Governor of Puerto Rico?

Puerto Rico is set to pass its first balanced budget in 22 years, which will enable us to allocate more resources to generate employment opportunities. We are also diversifying our industrial base. We need to transform our agricultural sector to make it more efficient, and also renovate our tourism sector. These elements will enable us to become a more competitive economy in the region and the world.

What are the competitive advantages of investing in Puerto Rico?

I would sum it up in one statement; all the main multinational pharmaceutical companies have a presence in Puerto Rico, and they are all continuously expanding their activity. The same is true for software developers such as HP, IBM, and Microsoft, and many others that are already operating successfully here. Many airlines and tourism companies have already returned to the country in recent years. Avianca has increased its routes from Puerto Rico from three a week to five, and will soon have daily flights, too.