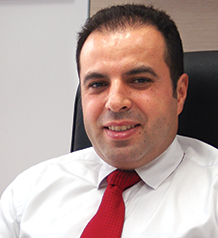 Adil Hamade graduated from Marmara University in 1998 with a BA in Economics, following extensive studies in hotel management and Management Information Systems. Later he received his MBA degree in Aerospace Management from Toulouse Business School in Toulouse France. He began his career as Assistant Operations Manager with Atlas Group in Istanbul and joined Turkish Airlines in 2000 as a Flight Operations Officer. In 2003, He moved to Dubai and worked as the Turkish Airlines Station Manager at the Dubai International Airport, and in 2006 moved to Yemen to become Country Director. In 2008, he was once again posted as Director of Dubai and Sri Lanka and since February 2010 has held his current position of Director of Lebanon.

Turkish Airlines is a European airline with the highest number of originating destinations in the Middle East. What factors differentiate your airline from the Middle East carriers?

Due to the geostrategic position of Istanbul—a city that is within reach of major cities in Europe, Central Asia, the Middle East, and North Africa in just two to four hours—Turkish Airlines naturally gains a big advantage in respect to other carriers in the Middle East.

What are some of the opportunities and challenges you encounter in the Lebanese market?

The exemption of the visa regime between Turkey and Lebanon has boosted traffic between the two countries, but the instability in the region has affected the incoming traffic to Lebanon.

In 2014, the total number of passengers carried by Turkish Airlines increased by 13.3%, reaching 54.7 million passengers. What destinations have enjoyed the biggest popularity and how would you assess Beirut’s performance?

What strategies do you implement to stay competitive in the Lebanese market, and is Turkish Airlines undertaking any initiatives aimed at increasing the interest in Lebanon as a tourist destination?

Turkish Airlines conducts many advertisement campaigns in the Lebanese market to increase its brand awareness. Furthermore, Turkish Airlines organizes family trips to various destinations in Turkey and abroad for its agents and corporate customers in which they have the chance to explore new destinations for their customers. Unfortunately, due to the unstable situation in the region that is affecting Lebanon, the incoming traffic has decreased. However, as the situation improves, Turkish Airlines will take initiative in promoting Lebanon as a tourist destination.

Which new routes or regions is Turkish Airlines prioritizing as part of its expansion strategy?

What is your main focus for the year ahead as far as the Lebanese market is concerned?

For Lebanon’s market we are seeking to enlarge all our flights with wider aircrafts to be able to provide extra capacity for our passengers and provide them with a unique service experience on our new wide-bodied aircrafts.