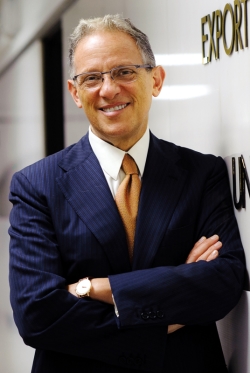 As head of Ex-Im Bank, Fred P. Hochberg plays an essential role in President Obama’s plan to double US exports by the end of 2014. From 2004 to 2008, Hochberg was Dean of the New School for Management and Urban Policy in NYC. From 1998 through 2001, he served as Deputy then Acting Administrator of the Small Business Administration (SBA), where he quadrupled lending to minority- and women-owned small businesses. Prior to his service at SBA, Hochberg was the long-time President and COO of the Lillian Vernon Corporation, where he led the transformation of a small mail-order company into an international, publicly traded direct marketing corporation. He is a past board member of the Port Authority of New York and New Jersey, the Citizens Budget Commission, and FINCA International Micro Finance. He received his undergraduate degree from New York University and his MBA from Columbia University.

Share on:
“The days are over,” US Secretary of State Hillary Clinton declared “of having outsiders come and extract the wealth of Africa for themselves, leaving nothing or very little behind.” She […]

“The days are over,” US Secretary of State Hillary Clinton declared “of having outsiders come and extract the wealth of Africa for themselves, leaving nothing or very little behind.” She promised a focus on “partnership, not patronage” and “a model of sustainable partnership that adds value, rather than extracts it.”

As head of the Export-Import Bank of the US, I am committed to making this happen by providing finance to companies here with sound business plans that partner with US exporters. We provide loans, guarantees, and credit insurance to people when these are not readily available from the private sector.

My visit in 2012 marked my second time in Mozambique. The first was when I was 15 years old, as a high school student on a cargo ship that docked in Maputo, which then went by its colonial name of Lourenço Marques. We only stayed long enough to offload and load cargo—then on to other African ports—but the sights and sounds of the docks and the city beyond were unforgettable. It was part of my early education about a world tied together and enriched by commerce, ambition, and hard work. I am still at it—working to tie the world together with economic development and trade. I visited Mozambique again to work with government officials and the business community to provide vital financing to help move Mozambique forward and continue building this economy.

“The US has long been the largest bilateral donor of aid to Moazambique.”

The US has long been the largest bilateral donor of aid to Mozambique. It is now time to expand that and work with the commercial sector. That is where financing from the Ex-Im Bank can be supportive.

Our financing here has been modest so far, but we know that we can do much more. Since 2009, the bank’s exposure in South Africa went from less than $50 million to more than $1.1 billion today. That kind of financial growth is possible here.

We see a country of young, ambitious people, growing in number and ready to learn new skills and work hard. We see abundant natural resources waiting to be developed. The strategic location and long coastline present many opportunities to grow and establish transportation hubs and corridors. This all provides a path to lasting prosperity, with Mozambicans both directing these efforts and benefiting from them.

Strong economic growth in Mozambique over the past decade—virtually the fastest non-oil growth rate in Africa—is a tribute to the improved productivity and economic management of the country.

Underscoring that new awareness was the business development conference held in Maputo in April, “Let’s Do Business: US-Mozambique 2012,” which attracted 46 US companies. They ranged from oil giants Anadarko and ExxonMobil to aircraft manufacturer Boeing and credit card company MasterCard, as well as the US-Mozambique Chamber of Commerce.

Recent discoveries of major new natural gas supplies off the northern coast are part of that progress. For example, Ex-Im Bank is in discussions with Anadarko about providing some of the necessary financing for its projects here such as socially responsible projects that include local partners and opportunities for technology transfer, job creation, and industrial development. Small businesses need to be a part of this, to create job growth, and to provide opportunities for people to move into the middle class.

We also meet with Mozambique Airlines (LAM) officials about how we can aid its expansion with Boeing aircraft to serve the growing demands of air travel for business and leisure within the country and the region. Probably the greatest financing needed is for infrastructure improvements such as LNG projects, hydroelectric facilities, coal mining, cargo systems, highway construction, or simply dependable electricity for homes, offices, and factories. All of them are necessary for Mozambicans to advance into the global middle class.

Ex-Im Bank has decades of experience in such infrastructure financing and partnerships with world-class engineering and construction companies. We know how to structure transactions so that as these improvements take shape and yield benefits to the entire country.

In other words, Ex-Im Bank is ready to forge new partnerships with Mozambicans for the mutual benefit of both countries. We are ready, as Secretary Clinton put it, for “partnership, not patronage.”