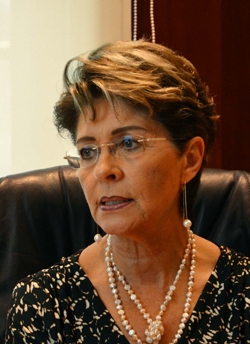 Secretary of Health, the Government of Mexico

Mercedes Juan was born in Mexico City. She is a surgeon and a specialist in rehabilitation medicine, and graduated from the National Autonomous University of Mexico (UNAM). She has a graduate degree in Neurological Rehabilitation from the Autonomous Metropolitan University (UAM). Her professional development has been closely linked to public health issues. She is the first woman to hold several important positions in the health sector in Mexico. She was the first Undersecretary of Regulation and Sanitary Promotion in the Mexican Ministry of Health, as well as the first Secretary of the General Health Council, a constitutional organ that is appointed by the President of the Mexican Republic. Now, as the first woman holding the position of Secretary of Health, Mercedes Juan works passionately to promote prevention and to make public health services in Mexico efficient and with high quality.

Share on:
"I have been part of the evolution of generic medications in Mexico."

What are the main goals and landmark achievements of the Strategic Health Plan 2013-2018?

President Peña Nieto has identified the health sector as one of the government’s five strategic pillars. His aim is to make Mexico a more inclusive country, with higher levels of security, global responsibility, and greater education, becoming a nation prepared for future challenges. One of the first reforms President Peña Nieto advanced was that of the education system, and today he has the health sector in sight. Back in 1983, Mexico had already determined healthcare to be the right of all Mexicans. Indeed, our constitution stipulates a right to protect health. Subsequently, a general health law followed. The law has seen numerous amendments over the past couple of decades, with an accompanying modernization of public health institutions to establish a strong national health system. The office of the Secretary of Health was created in 1943, but back then it had a stronger focus on providing assistance. Since then, we have also seen the establishment of the main national health institutions, and it was only in 1985 when the Ministry of Health was established in the form it takes today. It has been restructured following Mexico’s move to a decentralized health system, in which each state assumes health responsibilities. This process was strengthened during the 1990s, and today each of the 32 states has its own Health Secretary. In 2004, the government of Mexico established the social security system. Ever since then, we have been strengthening this system with the inclusion of a larger number of diseases, the treatment of which is covered by social security.

How has the social security system taken shape since 2004?

In 2014, we will celebrate its 10th anniversary; initially it started out with 5 million affiliated members, while today the number is at 55.6 million. In terms of diseases and surgical procedures, it initially covered around 90, but today encompasses over 300. We have an economic fund allocated to the treatment of rare and high-cost-related diseases; 10 years ago we only included leukemia for children, while today we include a pool of over 60 such diseases based on epidemiological data. Overall, the achievements over the past decade have been formidable; we have increased the coverage of social security, and the number of affiliates, while people are more aware of their entitlements. The allocation of funds among the states is done according to the number of affiliates each has, and we have an extensive portfolio of free medicines for the public. The social security system also allocates a budget to provide full-coverage insurance for children under five years of age. Today, we are in the process of strengthening our control over the general allocation of funds and their administration in the different states.

How has the presence and demand of generic medications changed in Mexico over the past few years?

I have been part of the evolution of generic medications in Mexico. It has been a process requiring considerable effort from both the authorities and the manufacturers. One of the key steps we took was the signing of a commercial purchase agreement for state authorities, proving before the eyes of consumers the quality of these medications. We then distributed them through the social security system. Additionally, the amendment to the general health law of 2005 brought a positive change; it led to the renewal of health registers with stricter and more reliable control parameters. These steps have led to a situation today in which we have a wide portfolio of generic medications that are well positioned in the market. Those who use them know their properties, and we must continue working in this direction.

“I have been part of the evolution of generic medications in Mexico.”

Since more than 30% of Mexico’s population suffers from obesity, what measures are being implemented to address the situation?

This is a serious condition Mexico has suffered from for the past 20 years. The latest data, released in 2012, indicates that 34% of Mexico’s population suffers from obesity and 38% are overweight. In other words, one out of every three children is obese. The government, through the Health Secretary, has already approved its strategy for tackling the problem; we are set to strengthen health education, and will also provide integrated health care for such diseases to prevent complications related, for example, to diabetes. We will also strengthen the network of primary healthcare facilities in terms of staffing, especially in rural areas of the country. Meanwhile, we will step up efforts in the legal and advertising spheres increasing the tax burden for unhealthy food and drinks. We are aware of the long road ahead of us and require the participation of all parties, not only the health institutions, as this is also a social problem. In this context, we are set to establish a citizens’ watchdog that will be bringing all parties involved under the same umbrella to better join efforts and tackle the problem. This citizens’ watchdog will also be an external evaluator of our strategy to better analyze our developments.

How would you assess the role of R&D activities as a driver for future developments in the health sector in Mexico?

Our goal is to push forward a new reform of the health system in order to reach a situation of universal healthcare in Mexico. We also need to increase cooperation between all public health institutions, especially when it comes to people affiliated with popular insurance and social security, to offer better services to patients. This will help us to reduce costs and increase portability in terms of services. Finally, we also need to step up efforts to improve the quality of the service the public health system offers in terms of reducing waiting lists and improving the treatment of patients. Lastly, we need to increase efforts regarding prevention and the changing of social trends and habits of people, so we can reduce the prevalence of many diseases.

What is the potential for Mexico to become a leading destination in health tourism?

This area is still in the early stages of development; however, we already have a joint project with the Secretary of Tourism to develop a common strategy in this area. Mexico has all the conditions necessary to become a popular destination within the health tourism industry, and we will take important steps over the next couple of years. In this context, I think the northern states could take the lead very soon.

What segments of the health industry offer the greatest potential to attract foreign investment?

I personally believe that the technological segment within the health industry, as well as infrastructure, are the two spheres offering the most attractive potential for investment. We will be witnessing interesting projects in the near future within the framework of public-private partnerships. For example, we have already built six hospitals within this scheme in Mexico, and the feedback thus far has been highly positive.