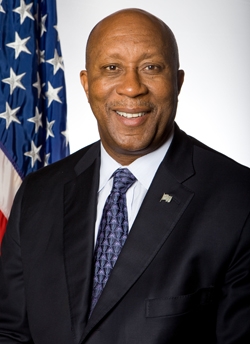 US Trade Representative, US

Ron Kirk is the US Trade Representative and is a member of President Obama’s cabinet, serving as the President’s principle trade advisor, negotiator, and spokesperson on trade issues. He obtained a Law degree at the University of Texas School of Law and has both public- and private-sector experience. He has served two terms as the first African-American Mayor of Dallas, held the position of Texas Secretary of State under Governor Ann Richards, and practiced law as a partner at the Vinson & Elkins law firm.

How do you assess the US-Colombian commercial relationship?

The US-Colombia commercial relationship is very promising as a result of the entry-into-force of our trade agreement on May 15, 2012. This marks the beginning of a new chapter for both countries in terms of trade and investment. Both of our economies gain from trade. For example, Colombia is a large importer of grains from the US, while it exports a number of tropical fruits to our country. Also, US cotton, yarn, and fabric exports to Colombia are used in many apparel items that Colombia exports to the US. Now that our trade agreement has entered into force, key US exports receive duty-free access to Colombia, including most products in agriculture and construction equipment, aircraft and parts, auto parts, fertilizers and agro-chemicals, IT equipment, medical and scientific equipment, and wood. With more than 46 million consumers, Colombia is a fast-growing market for US businesses. Even before May 15, Colombia was the third largest market for US exports in South and Central America, with over $14 billion in US exports in 2011.

What advantages does Colombia offer US investors?

Colombia offers a level playing field for US investors. Our trade agreement provides guarantees that US companies in Colombia are protected against discriminatory or unlawful treatment, and it grants them recourse to a neutral and transparent mechanism for the settlement of investment disputes. Colombia also offers US investors a prime location for international trade. Colombia is the only country in South America that has coasts on both the Pacific Ocean and the Caribbean Sea, which gives it a shipping advantage in today’s global market. Aided by major security improvements, steady economic growth, and moderate inflation, Colombia has become a free market economy with major commercial and investment ties to the US, the EU, Asia, and Latin America. The past 10 years have brought extraordinary change to the country in terms of economic development and improvements in national safety and security. The political stability, growing middle class, and improved security have created an economic boom in Colombia that has lessened the impact of the global economic crisis.

What will be the medium-term impact of the recently ratified FTA between Colombia and the US?

In the medium term, this comprehensive trade agreement will eliminate all tariffs on US exports to Colombia, which will promote further economic growth and continue the expansion of trade between our two countries. A US International Trade Commission study estimates that US exports to Colombia will be $1.1 billion higher once the trade agreement is fully implemented, supporting thousands of additional American jobs. The US Department of Agriculture has projected that American farmers and ranchers can expect to see their exports grow by more than $370 million, or more than one-third of the current total. One challenge lies in the area of Colombian infrastructure, which President Santos has committed to addressing through an investment and infrastructure plan. However, this also presents an exciting opportunity for US infrastructure-related exporters as well as construction and engineering companies seeking to expand their businesses.

“The political stability, growing middle class, and improved security have created an economic boom in Colombia.”

What is the potential of Colombia to become an export platform to other Latin American countries with which the US does not have FTAs?

It is clear that the Colombian government has embarked on an ambitious agenda of concluding trade deals with many partners around the globe. Securing such access for Colombian exports would certainly make the country a more attractive investment destination.

The US is Colombia’s largest trading partner, representing about 42% of Colombia’s exports and 26% of its imports as of November 2011. What is your outlook for US-Colombian trade levels in the medium term?

We expect a substantial increase in US exports to Colombia across many sectors. While the US-Colombia Agreement only went into effect in the middle of May 2012, our trade data already shows that US goods exports are up 28% compared to those of May 2011. In addition, the Open-Skies aviation agreement was fully in place in January 2013. This gives US and Colombian airlines further flexibility to transport additional goods and passengers between the two countries.