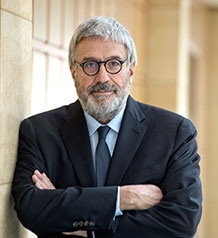 Dr. Freddie C. Baz joined Bank Audi in 1991 as advisor to the Chairman and founded the Secretariat for Planning and Development at the Bank. In addition to his duties as Vice Chairman and General Manager of Bank Audi and Group Strategy Director, he held the position of Group Chief Financial Officer from 2006 to 2015. He is also the Chairman of the Board of Directors of Bank Audi France, a shareholder and board member of Istanbul-based Odeabank, and a member of the Board of Directors of several other affiliates of Bank Audi. Furthermore, he is the General Manager of Bankdata Financial Services WLL, which publishes Bilanbanques, the only reference in Lebanon that provides an extensive structural analysis of all banks located in Lebanon, in addition to other specialized periodicals and reports. He holds a PhD in Economics from Paris Sorbonne University.

Share on:
"We are the largest contributor to GDP formation in Lebanon."

As the largest bank in Lebanon, how does Bank Audi contribute to the country’s GDP?

We are the largest contributor to GDP formation in Lebanon. Our contribution amounts to close to 1.8%, which is huge, especially when you consider that there are more than 600,000 economic units in the country, and for one single unit to contribute as much as we do is very significant. We are also the largest employer in the private sector and the largest deposit taker. We are also the largest financier to the domestic economy in both its public and private sector components. Moreover, we are the largest taxpayer underscoring our large sense of corporate governance and social responsibility. We have a fiduciary responsibility as the largest bank in the country towards the financial sector as a whole, and a responsibility to adhere to best practices in terms of governance, compliance, and financial disclosure.

How would you assess the last financial year for Bank Audi, and what do you expect for 2015?

The fact that Bank Audi is a group rather than a single bank means our consolidated position encompasses the financials of principally 11 banks and three financial companies present in 12 countries outside Lebanon, covering various business lines. We cannot link the consolidated performance to only one single operating environment and the Group’s activity is not evenly spread across the 12 countries. There are in fact four main development pillars: Lebanon, Egypt, Turkey, and the private banking business line which represent more than 90% of assets and earnings.

The soundness of the diversification strategy adopted by the Bank was again confirmed by the Bank’s performance in 2014, efficiently driving a sustained growth in spite of the persisting challenging operating environment while enhancing the Group’s competitive positioning. Consolidated assets grew by 15.9% to exceed, for the first time, the $40 billion threshold, highlighting the Bank’s capacity to attract new customers and expand its range of services. In parallel, consolidated net profits rose by 15% relative to 2013 to reach $350 million, translating into an ROAE of 13.6%. This performance stems in particular from entities operating in Lebanon, Turkey, Egypt, and private banking entities and reinforced the Group’s position among the top 20 Arab banks at large.

The results of 1H2015 are in line with those achieved in 2014, whereby the Group’s performance continued to reflect Bank Audi’s privileged position in key markets of presence. Indeed, we have an undisputed leadership in Lebanon, we are also the seventh private sector’s bank in Egypt and the thirteenth deposit bank in Turkey out of 34 operating commercial banks in just 30 months of operation. We have also close to $10 billion in assets under management booked in our private banking entities mainly in Switzerland, Saudi Arabia, and Lebanon, a level which compares well with that of the regional Arab banking institutions.

How are Bank Audi’s operations in Turkey developing and how do you envision Odea Bank advancing over the medium term?

Starting from scratch in November 2012, the assets of Odea Bank, our subsidiary in Turkey, reached $10.8 billion at end-June 2015, reflecting a solid customer attraction and business development capacity, and positioning Odea Bank 13th among the deposits bank in Turkey.

In parallel, Odea Bank has started to be profitable after 19 months since launch, posting $15.8 million net profits in 2014. In 1H2015, Odea Bank recorded $16.6 million of net earnings, representing a rising trend that management is looking to turn into an exponential growth.

This performance is attributed to the fact that Turkey is a sizeable emerging country with a track record of sustained economic growth, reaching on average 5.4% per annum over the last 4 years, but also to the best-in breed talent pool of Odea Bank and its pioneering role in terms of innovation, granting it significant market competitive advantages.

Building on the significant performances achieved so far, our plan in Turkey is to develop a value-added SMEs and consumer lending segment while leveraging on the wide footprint in the MENA region to benefit from the expected growth of trade, financial and human flows between Turkey and Arab countries to further develop corporate and commercial banking.

Today, Turkey is subject to a lot of volatility as a result of the change in the policies of the US Federal Reserve Bank and of the prevailing domestic political disputes impacting the sentiment of foreign and local investors and affecting the exchange rates and banking operating conditions. This environment may slightly delay our business plan but we, as long-term investors, are confident we are going to achieve our growth targets in Turkey over the medium term despite of the highly vilified environment in the short term against which we are putting in place the needed contingency planning.