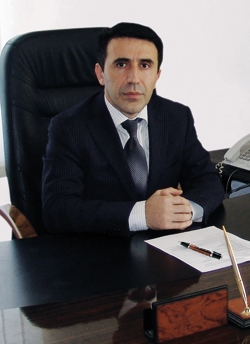 To Invent in Stone

Engineering Department of the Azerbaijan State Technological University from 1985 to 1992. In 1992, he founded the “EFTB“ cooperative and became its first Director. In 2000, he founded Matanat A company, and he has been its President ever since. In 2001, he became a Member of the Council of Entrepreneurs under the President of the Republic of Azerbaijan, and since 2004 he has been Chairman of the Absheron District Entrepreneurship Association. He is also a Professor of the International Eco-energy Academy, a doctoral student of the Azerbaijan University of Civil Engineering and Architecture, as well as designing several new inventions.

Share on:
Matanat A is a leading company in Azerbaijan and the region. As President of the company, how would you evaluate its activities? Matanat A was launched as a company in […]

Matanat A is a leading company in Azerbaijan and the region. As President of the company, how would you evaluate its activities?

Matanat A was launched as a company in 2000. Its key development principle has been to bring the latest technology and the most advanced construction techniques to Azerbaijan and pave the way for innovation. We have achieved our goal over the years, as the company’s portfolio currently includes over 1,000 products and more than 200 trademarks. The company has tried to operate in accordance with the requirements of a free market economy. Both ordinary consumers and companies implementing major construction projects in Azerbaijan have great confidence in the products of Matanat A. This confidence is certainly a product of our hard and goal-oriented work. Matanat A is the author of several patents. We can point to our company’s FasNatural product, which replaces aglay stone and has already been patented in over 150 countries around the world. FasNatural is a dry mixture used on building façades. In comparison with aglay stone, it does not absorb moisture, will not crack in shafts, and reduces the façade burden by 11 times. This suggests that our company not only applies the technology available in the world, but also works to design its own techniques and innovations, thus contributing to the development of the global construction industry.

The construction sector is booming in Azerbaijan. What portion of your business is local, what portion is international, and where do you see the most growth potential?

In fact, not only the construction sector but also other sectors of the economy are experiencing dynamic development as a result of the government’s successful economic policies. The overall economic development has had a knock-on effect on the construction segment as well. Matanat A has also benefited from the boom in the construction sector by producing high-quality and modern building materials. Most of the company’s business is in Azerbaijan; however, we also work with other countries. Our international activity currently consists of exports. The products of Matanat A are exported to CIS countries, including Russia, Georgia, Kazakhstan, and Turkmenistan. Since products in this segment of the construction industry cost very little, are in large supply, and are quite heavy in weight, it is not deemed economically viable to transport them over long distances. Therefore, production has to be organized in regional countries. Regarding the potential for growth, it is clear that globalization is the driving force behind economic growth. Our company sees the main source of growth both in the future development of the domestic construction sector and in expanding its business on a global scale.

It was reported that Matanat A would build a facility that will produce construction materials in the Krasnodar region of Russia. How does this move fit into your current growth strategy?

We consider exports to foreign countries a top priority for our activities and make every effort to increase them. Since it is not economically profitable to transport our products over long distances, the organization of production in some foreign countries becomes inevitable. Russia’s Krasnodar region is one of the places where Matanat A plans on building a plant. Its construction will take place using Russian credit resources. This regional enlargement is fully in line with the company’s growth strategy and we are confident that the national brand of Matanat A will also earn recognition outside Azerbaijan.

What are the benefits and challenges of expanding your regional footprint?

Globalization opens up both extensive opportunities and challenges for businesses. Obviously, successful operations in foreign markets are important for sustainable development. One of the key challenges of working in a foreign market is the fact that entry into a different business and competition environment requires different, diverse skills, additional resources, and successful strategies. Despite the said challenges, several competitive companies have emerged in Azerbaijan in recent years. Matanat A considers its operations in foreign markets to be highly competitive.

How would you rate Azerbaijan as a base for multi-national operations?

Azerbaijan is one of the most favorable places for multinational operations. The investment and business environment in the country has received positive assessments from the world’s leading rating agencies such as Standard and Poor’s, Moody’s, and Fitch. Also, Azerbaijan is ranked highly in the World Bank’s Doing Business and Global Competitiveness reports, which can be viewed as international confirmation of the attractive business and investment climate in the country.

Over the past decade, what have been the most important changes in Azerbaijan’s business landscape and economy?

In the 10 years of Ilham Aliyev’s presidency, the Azerbaijani economy has undergone dramatic and fundamental changes. The fact that the GDP has tripled in the past eight years is the best indicator of economic and social growth. All spheres of economic and social life have experienced dramatic changes for the better. The non-oil sector has developed at a rapid pace in the last 10 years, a competitive army of national businesses has emerged, and a strong infrastructure network highly important to entrepreneurs has been put in place. In general, our country has made great strides in terms of regional socioeconomic development in district areas. The improving standard of living in the country has given an impetus to all sectors of the economy. Azerbaijan has joined the ranks of the world’s sustainable economies and is a major economic player in the region.

Where does “Matanat A” see itself in the medium term?

In the medium term “Matanat A” will continue its course for the development and application of new construction technologies. To support ongoing government programs, the creation of jobs will be one of our priorities. To this end, we plan on building and commissioning new plants. The new plants to be built in Azerbaijan, in particular the limestone plant to be established in Gazakh District, will enhance our production base. The company also intends to establish a network of branches in foreign countries in order to increase exports and accelerate our integration into foreign markets.