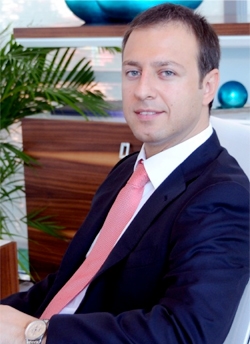 K. Ekim Alptekin, President of the Turkish American Business Association (TABA-AmCham), is committed to the chamber’s mission of boosting trans-Atlantic trade and bolstering the commercial angle of decades-long Turkish-American partnership. He graduated from the University of Utrecht with a degree in Law and Economics and has worked for various international institutions, notably the US House of Representatives’ International Relations Committee and the Netherlands Parliament during the Dutch Presidency of the EU. On the business front, he is the founder and president of EA Aerospace A.Åž, a major shareholder of Eclipse Aerospace; an Albuquerque, New Mexico-based aircraft manufacturer. He is also commercially active in the Real Estate and Entertainment industries through his companies EA Inşaat and OneColony A.Åž., respectively.

Share on:
"There are many Turkish-American entrepreneurs who have started their own companies in the US. There are a lot of exciting stories there."

Given the size of both the Turkish and US economies, how would you characterize the volume of trade and investment between the two?

The US is the world’s largest economy, and Turkey ranks 17th with an aim to enter the top 10 by 2023. With the importance of both economies in mind, the trade flow between the two is nowhere near where you would expect it to be. Although large multinational companies, such as TABA members Honeywell and Motorola, are familiar with the Turkish market, mid-sized companies remain uninformed about the potential that Turkey offers. For example, many US companies are importing products from Mexico, which they are likely to get for a better price and higher quality in Turkey. Although globalization has made the world smaller, we still see a lot of information gaps that prevent the right markets from finding each other. There is unrealized trade potential between many countries, but the commercial component of the Turkish-American relationship is dwarfed by the level of political and military integration between the two countries. We have been talking about developing the potential in our commercial relations for decades now, but we have finally reached a point that the size and quality of our trade is growing and we are seeing more and more bilateral investment. The commitment of the government of Turkey has been an important incentive as well in this regard. Minister of Economy Zafer Çağlayan has identified the US as a key priority, which helps us to create the right level of awareness and infrastructure needed to seize this momentum.

What role is Turkish investment playing in the US?

The US-Turkish economic relationship cannot be described solely by looking at trade flow anymore. Now we are seeing mutual investments back and forth, and not just in traditional areas such as textiles. For example, Eczacıbaşı has acquired a company in the US called Capintec, which is producing nuclear measurement devices. Sarkuysan, a leading producer of copper-wires in Turkey, has established Sark-USA with its headquarters in Albany, New York, and therefore now has a solid base of operation and production in the US. Similarly, there are companies like EA Havacılık that have made successful aerospace investments. These are large Turkish companies moving into the US and making sizeable investments, but there are also many Turkish-American entrepreneurs who have started their own companies in the US. There are a lot of exciting stories there. For example, the Sierra Nevada Corporation, which is involved in the aerospace and defense industry, was founded and is run by a husband and wife from Turkey who now reside in the US. The company employs more than 3,000 people and has a turnover that surpasses $2 billion. This is an amazing success story. Another example is entrepreneur and philanthropist Yalçin Ayaslı, as well as the popular yogurt company Chobani, which was founded by Hamdi Ulukaya. But there more success stories that people are unaware of, and they are taking place in aviation, aerospace, defense, and high-technology industries, and this is what is truly exciting me.

“There are many Turkish-American entrepreneurs who have started their own companies in the US. There are a lot of exciting stories there.”

To what extent should the proposed Transatlantic Trade and Investment Partnership (TTIP) between the US and the EU be a priority for Turkey?

I believe it is hugely important and thankfully the Turkish government has shown early initiative in making sure Turkey is not excluded. We would be wrong to view it as just a free trade agreement (FTA). The likelihood of a transatlantic common market happening between the EU and the US has never been this high, and if realized as envisioned it will undoubtedly have a lot of political effect as well. In a way, I compare it to the Marshall Plan because it could provide the economic spark that Europe needs to lift itself out of its current economic malaise. It is of course hugely important for Turkey as well, because the EU is our largest trading partner. It is important economically, but also politically, because we are invested in the long-term future of the EU. Whether we become an EU member state or not, we want the EU to be a successful political and economic Union. As a member of the EU Customs Union and a candidate for membership, Turkey has already harmonized its economic regulations with the EU and would be a logical component of the TTIP. The letter of the Customs Union Treaty requires Turkey to separately negotiate FTAs with third-party countries that the EU signs with. However, I believe the EU has a responsibility toward Turkey to integrate Turkey in the TTIP. To avoid a road accident, relevant Ministers such as Zafer Çağlayan and Minister of EU Affairs Egemen Bağış are taking coordinated steps to ensure parallel negotiations with the US should the EU ignore this responsibility. I think the White House, the Secretary of State, and now the Secretary of Defense all know Turkey very well, and they all understand the strategic importance of the country. My concern is that Turkey needs to invest more time and effort into reaching out to the US Congress. Congress has other reflexes beyond the executive branch, and it has the final say on FTAs. For this reason, I trust that Prime Minister Erdoğan will add Congress to his schedule during his upcoming US visit.

Has the perception of Turkey in the US changed over the past 10 years?

What the House of Representatives thinks about Turkey represents in great detail the way the US population thinks about Turkey. Before 9/11, it was actually, interestingly enough, more negative. This is evidenced by the resolutions that were passed. There were a higher number of negative resolutions passed about Turkey compared to positive ones prior to 9/11. Not all of these resolutions have a legal effect, but they did condemn certain actions take by Turkey, such as moving into Cyprus. After 9/11, I believe that awareness throughout the US about our region increased as well as the role that Turkey plays in NATO and fighting terrorism. This is partly thanks to the Congressional outreach of organizations like TABA, but the engagement of highly experienced diplomats in Washington has also been pivotal. Much more remains to be done but we have started walking in the right direction.

What is the Turkish-American Business Association (TABA-AmCham) doing to influence public opinion and lobby the government in the US?

We have to go beyond just lobbying Washington. We need to be locally present and we need to show the US that we are investors in the country. We create jobs in almost every region, and we do this by buying products and investing in the US. We are buying American products and our members are involved in the local production of jet aircraft and the national space program. We are more active participants in the US economy, and we need to be more actively involved in local US politics. The way to do that is to first make sure that people are aware of what we do, and this starts with engaging opinion and decision makers. With our new initiative in the US, called TABA-USA, we want to approach congressmen and women in their districts and show them that we are their constituents and employers in their district, and support them in their policies, where there is a mutual interest. This is not a political lobbying group. Instead, it is focusing on highlighting the importance of doing business with Turkey and Turkish-Americans at a local level. The group has no partisan agenda and we will not attempt to lobby about any contentious political issues. We already have excellent diplomats such as Namık Tan who can argue those cases in the right corridors. What we are focused on is grassroots educational activities, highlighting the incredible trade and investment opportunities that both nations can find in our respective countries. I think that if Turkey continues its current economic performance, then naturally the biggest question will be whether it can sustain the economic growth it enjoys. Turkey has shown remarkable resilience with regard to the global economic downturn. Clearly we are not entirely unaffected from the global crisis, because we are all on the same plane, but I think we are certainly flying first class. We have better security belts, and things are running more smoothly on our part of the plane. I think that if we can continue to implement a smart and calculated economic policy, our growth will continue for years to come. Furthermore, if we can pull off the new outreach that the Turkish government has initiated on the Kurdish issue, we can finally rid the country of its largest burden. If we are able to solve the issue with the PKK and free our country of terrorism, we will see a real revolution in growth in Turkey, and achieve our targets for 2023.