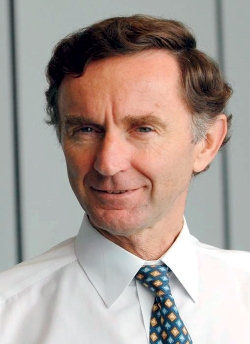 Lord Green began his career with the Ministry of Overseas Development. In 1977, he joined management consultants McKinsey & Co Inc., with whom he undertook assignments in Europe, North America, and the Middle East. He joined HSBC in 1982 with responsibility for corporate planning activities and in 1985 was put in charge of the development of the bank’s global treasury operations. In 1992, he became Group Treasurer of HSBC Holdings and in 1998 he was appointed Executive Director of the same bank. Lord Green retired as Minister of UK Trade and Investment on December 11, 2013.

Share on:
What does the renewal of major oil and gas concessions in Abu Dhabi in 2014 mean for British energy companies, and why should the UK be seen as a partner […]

What does the renewal of major oil and gas concessions in Abu Dhabi in 2014 mean for British energy companies, and why should the UK be seen as a partner of choice for this sector?

The importance of the UAE to the worldwide energy market is well known. Abu Dhabi accounts for over 90% of UAE crude oil production, and there are plans to increase production capacity from 2.7 million to 3.7 million barrels per day by 2018. Much of the existing infrastructure will be in need of renewal to meet this target, and so an investment of approximately $20 billion is expected in the near future. Having been established in Abu Dhabi since 1939, and with a worldwide reputation for their expertise, UK energy companies are well positioned to contribute to, and benefit from, this expansion. When coupled with Abu Dhabi’s renewable and nuclear energy programs, companies across the sector can benefit from our growing energy partnership with the UAE.

What opportunities does the opening of the Khalifa Industrial Zone Abu Dhabi (Kizad) present for UK companies, and what is your impression of the growth of industry across the Emirate of Abu Dhabi?

Increased investment in Abu Dhabi has brought numerous opportunities for UK businesses, not only in industry per se, but throughout the supply chains of all related infrastructure. Indeed, prominent among the high value opportunities identified by UK trade and investment are UAE’s urban development and infrastructure projects. December 12, 2012, represented a milestone for the UAE and Abu Dhabi with the inauguration of Khalifa Port. Situated next to the Khalifa Industrial Zone, it will be central to the Emirate’s 2030 plan to boost trade volumes and diversify the economy. The industrial zone will offer UK companies access to local, regional, and international markets in an environment designed to simplify doing business. There are also significant investments and opportunities in the likes of transport infrastructure. The UAE plans to invest £15 billion in airport expansions over the next five years to provide a total capacity of over 300 million passengers per year, while Abu Dhabi’s Etihad Railway is fast-tracking construction of its freight transport project, with the first section of the $11 billion federal rail network nearly completed. The Department of Transport in Abu Dhabi is shortly expected to tender a £12.5 billion metro and light rail project to service a population expected to rise to 2.6 million by 2030.

The UAE’s largest sharia-compliant bank, Abu Dhabi Islamic Bank, opened its first London office in 2012. Do you anticipate more UAE investment outside of the energy sector in the UK and if so, where are the opportunities?

I welcome the Abu Dhabi Islamic Bank expanding its operations in London. The market for Islamic finance is growing rapidly; with global Islamic investments soaring by 150% since 2006, they are expected to be worth £1.3 trillion in 2014. In October 2013, London became the first city outside of the Islamic world to host the World Islamic Economic Forum, which highlights our place as a world-leader in the field, with over 20 UK banks offering Islamic financial products and services—more than in any other Western country. The UK appreciates the contribution that FDI makes to our shared prosperity. Abu Dhabi continues to be a major investor in the UK energy market; recently, this has taken the form of substantial interest in renewable industries, such as the £460 million invested in the London Array offshore wind farm. There are further opportunities for UK-Abu Dhabi exchange in numerous sectors outside of financial services and energy.

“The market for Islamic finance is growing rapidly; with global Islamic investments soaring by 150% since 2006. “