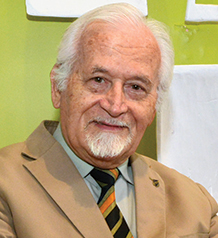 This Could Be Heaven

Grand Hotel Guayaquil recently completed its renovations. What have been the main changes and how will they benefit your guests?

Being the largest traditional hotel located at the heart of Guayaquil, we share an entire city block with the Cathedral and are a few steps away from the famous Seminario Park, where hundreds of Iguanas can be admired by visiting tourists. We are in walking distance of the Malecon 2000, a 2 kilometer-long path along the Guayas River, where visitors will find local restaurants, bars, and shops offering souvenirs. And of course there is a spectacular view of the river, where boats provide tours. Because of our hotel’s ideal location, we initiated a total interior and exterior renovation, with a $3.3 million investment spanning two years. All of our 183 rooms have been totally upgraded and a new elevator now serves from the basement to the Terraza Racquet Club, were we have a 650sqm sports complex with two squash courts, a fully equipped gym, sauna, steam bath, massage service, and a large social area. Our pool area also has been renovated, featuring a 4m-long Iguana made by a local artist, surrounded by tropical plants. Our 24-hour coffee shop, where we serve our buffet breakfast and a traditional executive lunch buffet has also been renovated, as well as the Turtle Bar, where we serve our welcome cocktail to our guests. The 1822 restaurant is undergoing renovation.

The Ministry of Tourism plans to undertake 30 tourist projects by 2017 with an investment of $1.6 billion. What will be the greatest challenges in boosting tourism activity in Ecuador?

In short, we need more flexible labor laws and friendlier legislation in order to attract and guarantee foreign investment.

The improvement of hotel infrastructure has become a priority for the government in order to optimize and broaden tourist capacity in Ecuador. What is your outlook for the hotel industry, and more specifically in Guayaquil?

We expect that demand for hotel rooms will be satisfied with the existing hotel capacity in Guayaquil, totaling approximately 750 rooms. New hotels are already under construction and others are announced to be built, and set to open between 2016 and 2018, totaling a further 1,275 rooms, bringing the total deluxe and first class hotel rooms available in the city up to an approximate 3,475 rooms.

What is the significance of the recent establishment of the Convention and Visitors Bureau in Guayaquil?

By the end of December of last year, Guayaquil’s Municipality created the Municipality’s Official Tourism Enterprise, presided by the former Tourism Director of the Municipality, Gloria Gallardo. Guayaquil’s Convention and Visitors Bureau is created under the wing of this organization, receiving partial financial support from the deluxe and first class hotels through a tourism tax charged to guest accounts. The tax will guarantee part of the needed budget for the bureau, which is already affiliated with the International Convention and Congress Association (ICCA). The Convention Bureau’s objective is to consolidate the city of Guayaquil as a specialized destination for conventions, congresses, and fairs. The city is well-positioned to serve as a hub for business tourism due to its the excellent year-round climate, its airport facilities that received annual international awards for best airport in its category of South America, and that are recognized as being among the best worldwide. The city also has excellent hotel services to offer, gastronomic variety, and of course our tourism highlight for pre and post tours, namely the Galapagós Islands.