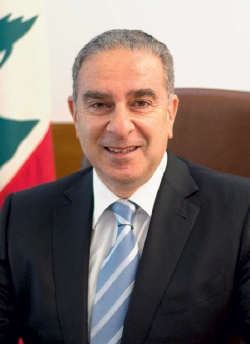 Thinking Outside The Box

Michel Pharaon was born in Beirut. He received an Economics Degree from St Joseph University in 1980, followed by an MBA from the University of Paris in 1981. As well as being a Member of Parliament and the Minister of Tourism, he heads the Board of Directors for Mednet Insurance Company and Commerce du Levant magazine. He is Deputy President of the companies Ruphayil Pharaon & Sons, and Pharaon Holding.

What kind of a year has 2014 been for Lebanese tourism?

In 2010, we had roughly 2.3 million visitors, and in 2013 there were 1.3 million visitors. There was a sharp decline during this government and at the beginning of the crisis in Syria. The country arrived at the end of 2013 in a very uncertain state. Now, in 2014, there are many things happening. The most important is that there is now a political will, though not an agreement, on security. At the same time, there was a regional and international consensus to protect the stability of Lebanon. It was not a political agreement, but it was a truce. The results were amazing, security-wise, and consequently we are seeing potential visitors expressing an interest in coming to Lebanon again.

How did you reach out to the Gulf states?

We went to the Gulf states and asked them to look at what we were doing, after that the relationship with these countries improved, and the tourists started coming back. The government was formed at the end of February 2014. The tourism figures in January, February, and March 2014 were not good, but since April, they have been rising. In Beirut before Ramadan, the occupancy rate at our major hotels was between 90% and 100%. The Phoenician was at 103%. Before the terrorist attack, June 2014 was a good month. The month of Ramadan is never strong in terms of occupancy, so we were expecting about 50% capacity. Reservations after the month of Ramadan were around 15% higher than in 2013. Planes were so fully booked that Middle East Airlines (MEA) put 40 extra flights on to Riyadh for the season. In addition, the Ministry of Tourism launched a new website in April 2014. We put 60-70 packages on offer because for the previous two years, travel agencies had been exporting tourists. Now, we have some new packages for under $1,000 for one week, with some help from Middle East Airlines (MEA) on better tariffs. Lebanon has some assets that are unique. We go in and create packages for religious tourism, for example. We also have themed travel packages relating to wine, honey, apples, and even silk; alternative tourism is part of our national strategy for 2014. We strive to be modern and dynamic and express the feeling that something new is happening for tourism in Lebanon. This is what we have managed to do, through the website, through our campaign, and with these new packages. We are also trying to energize tourism outside Beirut, even though the tourism infrastructure and assets in Beirut are excellent. Currently we have 60-80 small hotels available, but we think we can bring this up to 200 in the villages.

What kind of a role do you feel the Ministry of Tourism has to play in what some commentators have called economic diplomacy, with the Lebanese diaspora and the rest of the world?

I think the Tourism Ministry has a role in highlighting our potential. The private sector in Lebanon is dynamic; it sees potential and it acts. Lebanon has to promote itself, which requires both an overarching strategy, and also small strategies for, say, medical tourism and green/ecotourism. Furthermore, other parts of the Middle East don’t have the different regions that we can offer in Lebanon. And regional tourism development brings in revenue for the municipalities and regional administrations. You also have clients who are expatriates and it is important to create micro strategies for these segments of the market. For instance, you have a lot of people coming from, say, Tunisia for the nightlife here. We also need to develop a micro strategy for the casinos of Lebanon.