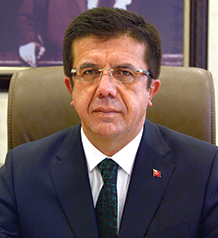 Nihat Zeybekçi was born in 1961 and graduated from Marmara University’s Faculty of Economics and Administrative Sciences, later completing a Master’s degree at Istanbul University in International Relations. Before being appointed Minister of Economy in December 2013, he was Chairman of the Committee of Industry, Trade, Energy, Natural Resources, and ICT, and previously Chairman of the Union of Turkish World Municipalities.

Share on:
Recently, job creation in the construction and agricultural sectors has slowed in Turkey. Which sectors are you prioritizing for development until 2019? In the period 2007-13, approximately 4.6 million new […]

Recently, job creation in the construction and agricultural sectors has slowed in Turkey. Which sectors are you prioritizing for development until 2019?

In the period 2007-13, approximately 4.6 million new jobs were created and informal employment rate decreased significantly in non-agricultural sectors. Turkish economy has been the fastest growing country in Europe in 2010 and 2011 with 9.2% and 8.8% growth rates respectively, mostly thanks to proactive policy measures. In 2012 and 2013, in parallel with the decrease in the economic growth rate, agricultural employment declined, but its share in total employment stayed at the same level. In 2013, the number of people employed in the manufacturing and services sectors increased around 4% and their share in total employment reached to 20.7% and 50.9% respectively. In the construction sector, in the last decade, the highest employment growth rate of 17% was realized in 2011, which has decelerated in the subsequent period in line with the developments in the GDP growth rate. On the other hand, the construction sector’s share in total employment, which was around 7% in the last two years, has been preserved. Today, skilled labor force raises its vital role at the global level. Supporting the development of alternative types of tourism, such as health tourism, conference tourism, winter tourism, and cultural tourism are considered as priority areas. Our target is to place Turkey among the leading countries in foreign contracting services in terms of profitability and services quality. In addition, in context of reducing the trade deficit, improving high-tech manufacturing in such a way that will support the exports in priority sectors such as the metal industry, electrical and electronics, machinery and equipment, the chemical industry, and the automotive sector is vital. In this sense, accessing new markets in the services and industrial sectors, increasing total value-added in exports, and taking our place among welfare countries are among the priorities of our development policy.

How would you describe the current state of economic relations between Turkey and the US, and what policies can be enacted to enable further bilateral investment?

Turkey and the US have been close allies for many years. The political relationship has always been at its best. However, the economic and commercial relationship could not meet the level of political relations. During the visit of President Obama to Turkey in April 2009, it was decided to increase the level of cooperation in the economic and commercial relationship to the level of “model partnership“. In this vein, the Turkey-US Framework of Strategic Economic and Commercial Cooperation (FSECC) was established and 2 coordinator Ministers on each side was appointed. Right now, Deputy Prime Minister Ali Babacan and Minister of Economy Nihat Zeybekci on the Turkish side, US Secretary of Commerce Penny Pritzker and US Trade Representative Michael Froman on the US side are serving as coordinators. As Turkey, we attach great importance to the FSECC mechanism. The 3rd Ministerial Meeting was held in May this year and both sides had the opportunity to discuss ways to improve economic and commercial relations of Turkey and the US at the highest level. Under the FSECC mechanism, Turkey-US Business Council was established as a platform to ensure more business friendly environment for the Turkish and US investors. The Ministry of Economy of Turkey and the US Department of Commerce are co-chairing this platform together with Turkish and US private sector chairs. The third meeting of the Business Council was held in Istanbul in June this year.

What are some of the Ministry’s primary development goals for the year ahead?

Our Ministry’s primary goals include supporting high-tech production, increasing export price per kilogram, decreasing our current account deficit and attracting more foreign direct investment. In order to reach our 2023 goals, we have to increase our R&D and innovation capacity as well as producing and exporting high value added products. We have put forward our current investment incentive system to manage technological transformation and increase our export capacity. Additionally our Ministry gives incentives to our exporters in many fields including R&D, branding, and design. Besides, in our Medium-Term Program covering the 2015-2017 period, the growth rate of 2015 is expected to be 4.0%. Our exports and imports are expected to be $173 billion and $258 billion respectively. We expect to have an unemployment rate of 9.5% and inflation rate of 6.3%. In the current program, we expect our current account deficit to GDP ratio to be 5.4%.