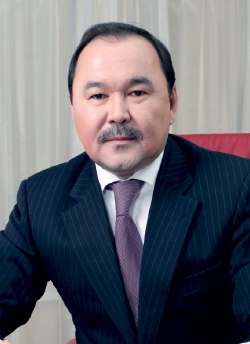 Chairman of the Board, Real Estate Fund Samruk-Kazyna

Share on:
What are Samruk-Kazyna’s greatest achievements? The Real Estate Fund Samruk-Kazyna was founded in 2009 to resolve the problem of a multiple number of shareholders who had been deceived by private […]

What are Samruk-Kazyna’s greatest achievements?

The Real Estate Fund Samruk-Kazyna was founded in 2009 to resolve the problem of a multiple number of shareholders who had been deceived by private construction companies. Kazakhstan is the only country that adopted the program for assisting people who suffered economic depression in the construction market. The President set a challenge to resolve the problem and, in particular, complete housing construction for the deceived shareholders. During the recent global financial crisis, over 100 housing developers were acknowledged to have gone bankrupt. Adjudication bankruptcy was the easiest way to leave the shareholders facing their problems on their own. Kazakhstan set about resolving the problems left in the construction sector by using other methods. Our investments allowed for the completion of 1 million sqm of high-quality dwellings, and that mitigated problems for over 3,000 shareholders. It is one of our most prominent achievements. Investments were performed through the buying out of free apartments from the troubled developers. The Real Estate Fund Samruk-Kazyna was the only organization in Kazakhstan that sold the bought out apartments by installments, which allowed for a secured return of the formerly invested money. The apartment owners have been paying monthly rent for 13 years, which is convenient for young families and buyers with moderate means. It is difficult to get a mortgage in a period of economic recession. At present, there are 800 families living in apartments acquired with the help of the installment program. It is worth mentioning that within the last three years, there were no violations of payment terms by tenants. In connection with finalizing the Anti-Crisis Program, in 2012 the Real Estate Fund started the Affordable Housing-2020 Program. Under the Program, we offer economy class dwelling. The prime cost of 1 sqm does not exceed $800-$1,000, and the selling cost cannot exceed $1,000-$1,200. In order to reduce costs we are trying to optimize the use of future dwelling spaces. For example, a typical two-room apartment for a young family will be a 35-40 sqm studio. We also apply energy saving and energy efficient technologies where possible. The program is in partnership with private developers. Our partners submit projects meeting all the requirements and invest at least 20% of the total cost of construction. The Fund adds the rest of the finances. Once construction is complete, the housing is transferred to the company-partner and the Fund for their disposal pro rata to their investments. Samruk-Kazyna sells its share through the Affordable Housing-2020 Program. As of today, private developers have submitted to the Real Estate Fund their applications for the joint realization of housing construction projects of about 5 million sqm in total area.

Considering the forthcoming World Expo 2017, what do you expect for the real estate sector in the future?

The World Expo 2017 and Affordable Housing-2020 will have a great influence upon the real estate and construction sectors. Kazakhstan has overcome the crisis, and construction works are continuing throughout the country. Economic-class real estate is one of the main priorities in Kazakhstan. There are enterprises under construction in order to reduce expenses for capital-intensive materials, such as glass, elevators, and pipes. The World Expo 2017 will facilitate the development of green engineering and illustrate some ecologic, economic, and social advantages due to the transfer of energy efficient housing corresponding to European standards. The exhibition will be staged on an area of 100 hectares. In our area, we are going to construct what we call “Green Town,” and in 2013 we arranged the tender for its design. It was an international tender, and many companies from the UK, Portugal, and Monaco participated. We decided to cooperate with the UK firm AEDAS, because it proposed the best project in accordance with international ecological methods of assessment.