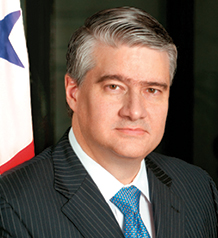 The Will to Grow

A graduate of Florida State University with a degree in Business Administration (1984), HE Dulcidio de la Guardia holds an MBA from Loyola University (1986), New Orleans, and received his Charter Financial Analyst (CFA) from the CFA Institute of Charlottesville Virginia in December 2000. In 1990, he joined the Panama Stock Exchange as Development Manager. In July 2002, he joined Primer Banco del Istmo (Banistmo) as Vice-President of Investment Banking, and was responsible for corporate finance, M&A, fiduciary services, and brokerage operations. In 2005, he was promoted to Executive Vice-President and Head of the regional banking unit. In 2006, he oversaw the merger of HSBC (Panama) and Banistmo banks, and was appointed Director of Corporate Banking and Markets. In 2007, he was appointed Director of the Private Bank. On July 1, 2009, he was appointed Deputy Minister of Finance of Panama.

Share on:
TBY talks to HE Dulcidio de la Guardia, Minister of Economy and Finance, on the Summit of the Americas, the investment environment, and Panama as an energy hub.

What was the importance for the country of the Summit of the Americas, and what are the main achievements that highlight the importance of this event from the economic side?

The Summit of the Americas was an overwhelming success. All countries were invited, and, in particular, there was a dialogue between the US and Cuba. The summit was an important step toward real dialog between the parties represented. On the economic front, the summit was a showcase for Panama. It showed that Panama is a vibrant democracy, where all sectors of the economy are able to express their points of view and their potential. The different summits, the CEOs summit, the entrepreneurs’ summit, the summit of the universities, and the youth summit, were all successful as well. The groups were able to reach consensus on several topics of critical importance to the region. We were able to show different American leaders what we have completed in the last few years, what opportunities Panama presents, and, most importantly, what we have accomplished. In the short term, the summit generated $80 million in economic activities. And while the short-term impact of the event is important, I would rather focus on the government’s ability to demonstrate the results of our national development. During the summit, Panama attracted some of the most important CEOs and entrepreneurs in the region.

What specific segments of the national economy are particularly appealing for international investors?

Panama is blessed with an unrivalled geographical position, the logistics sector remains a pillar for the economy, and the airport has been developed by Copa. These are related to that sector and its attractiveness. Secondly, Panama is becoming a financial hub for the region and, over the next decade, we will become an energy hub, too. The new set of locks for the Panama Canal will allow the transit of larger ships, especially energy ships. The next development is to create an energy hub here.

You recently led a delegation to Japan. What did you achieve during the visit and what is the importance of establishing synergies with the Asian markets?

The local authorities have shown a remarkable interest in the energy reserves in the Caribbean and Gulf of Mexico. The Japanese are looking to LNG supplies to fulfill their energy demands. We expect this market to grow in the next five years. Panama is a hub for Asian investments in the region. Tokyo, in particular, wants to move the discussion forward for financing line three of the Panama Metro. On that front, we were successful. I met with four different ministries in Tokyo, where we agreed on a timetable to complete the financing. In terms of synergies between Panama and Asia, Panama is the gateway for many Asian products. A number of Asian multinationals have their headquarters here. Panama will continue to support that in the coming years and now we are expanding the Canal, and with it the possibility of becoming an energy hub.

How are you working to get the country removed from the Financial Action Task Force (FATF) grey list?

Our strategy is simple. Panama agreed to develop a plan with FATF. In June 2014, that strategy was clarified and we are following that plan. The last step of the plan is the adoption of new legislation, during the last reunion with GAFI, Panama achieved an important milestone in the legislative field. The National Assembly approved several laws that will help Panama to be removed from the grey list.

Can you share your priorities and targets set for 2015?

As far as GAFI is concerned, our priority is to implement the new laws and to execute all the regulations for each of the industries. We have to support all the supervisors that will be in charge of monitoring all these entities. We want Panama’s economy to grow, maintaining a stable and balanced growth in all the segments of the national economy, benefitting the citizens of Panama—especially the most vulnerable—promoting social and legislative equality. The execution of The Strategic Plan for 2015-2019, characterized by significant public investment, focuses on developing the social component of the country and on enhancing the basic infrastructures, and will help us to reach our targets.