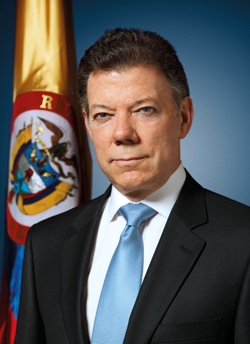 The Will to Grow

Juan Manuel Santos graduated from the Naval School of Cartagena in 1969 and continued in the Colombian Navy, obtaining a BA and finishing as a Naval Cadet. After leaving the Navy, he attended the University of Kansas, graduating in 1973 with a BA in Economics and Business Administration and went on to receive an MSc in Economic Development from the London School of Economics and another in Law and Diplomacy from the Fletcher School of Law and Diplomacy at Tufts University. He has worked as Chief Executive of the Colombian Coffee Delegation to the Interntional Coffee Organization and Sub-Director of his family-owned newspaper, El Tiempo. Under President César Gaviria, he acted as Minister of Foreign Trade. In 2006, he became Minister of Defense, before being elected President in June 2010.

What are the advantages of free trade agreements (FTAs)?

Colombia’s trade agreements have several goals. First, the idea is to leverage the advantages of international trade as a means toward economic growth. This includes providing clear rules for domestic and foreign entrepreneurs seeking to increase investment in our country. Additionally, FTAs give Colombia a level playing field in target markets, where competitors already enjoy the advantages that come with trade agreements. Finally, these agreements facilitate the integration of Colombian companies into global value chains. Within this framework, the trade agreements that provide the greatest impacts are those we have with our key partners: the US and the EU. These partners buy a significant portion of our exports (38% and 18%, respectively), but they are also markets where we face competition. The US and the EU are major importers of products for which Colombia already has or can develop competitive advantages. This, of course, applies to mining and energy products. However, in order to leverage the impact of these exports, we must also strengthen our higher value-added products. On this front, we should begin with processed foods, apparel, the metalworking industry, auto parts, chemicals, and business process outsourcing, among others. We have an ambitious agenda for our trade negotiations. Currently, we have 11 agreements in force, and we are aiming for 16 trade agreements with over 50 countries that will account for roughly 60% of the world’s imports. In addition to the US and the EU, this group includes all the Latin American countries, as well as Canada, the EFTA countries (Iceland, Norway, Lichtenstein, and Switzerland), South Korea, Japan, and Israel.

What are the strategic advantages of the Pacific Alliance trade bloc?

The Pacific Alliance is one of the most innovative integration strategies pursued by Colombia as part of its internationalization process. It is an open and flexible arrangement, with clear goals and pragmatic efforts to strengthen existing bilateral trade agreements among member countries. The aim is to develop a joint policy on trade and economic integration, so as to advance internationalization as an economic bloc. Essentially, the goal of the Pacific Alliance is to establish an area of deep integration driving higher growth, development, and competitiveness in the participating economies. This is to be realized through streamlining the free movement of goods, services, capital, and people. While it is true that integration is well underway in the trading of goods, we must continue deepening and strengthening the existing relationships and agreements dealing with services and investment among the member countries. Likewise, the four Alliance members must work on maximizing the benefits of foreign investment and international trade in services in the region, so as to achieve higher growth and economic development.

As a matter of fact, this is one of our priorities, and we have been taking bold steps toward tackling this challenge with efficiency, transparency, and accountability. So far, we have doubled investment in infrastructure from $1.6 billion in 2010 to $3.3 billion by the end of 2012. This is a huge step forward; however, it’s not enough. We surely need more investment, but without jeopardizing the country’s finances. This is why we have invited the private sector to join us, as partners, in building the infrastructure Colombia requires to live up to its highly promising potential. In order to foster the conditions for this partnership, we have focused our efforts around two tiers. First, we set the legal framework—through the Public—Private Associations Law—to promote the birth of the strong partnerships necessary to make a real breakthrough in our country’s infrastructure, which will result in building new and upgrading existing roads, ports, highways, and airports. These rules encourage companies and investors to become our allies in the design and execution of multiple ventures. And the results are forthcoming. Our National Infrastructure Agency (ANI) has already received over 15 proposals from private investors to develop projects worth $7.2 billion. Furthermore, we have also launched the most ambitious infrastructure plan in our country’s history: the Fourth Generation of Concessions. It comprises 30 projects valued at more than $22 billion.

What have been the biggest successes in your campaign against guerrilla groups in Colombia, and what are your expectations and strategies for a peaceful resolution?

Guerrilla groups in Colombia, which sadly persist in waging a long, painful, and outdated struggle that has cost thousands of lives and resulted in thousands of victims and displaced communities, have been harshly hit, particularly over the last six years, to the point that their ranks, previously estimated at over 20,000, today are not even half that number. Since the administration of President Álvaro Uribe, under which I served as Defense Minister during its second term, our armed forces have been permanently on the offensive against the guerrillas based on joint and coordinated efforts among different components, on equipment upgrades, and—something of the utmost importance—on strengthening our intelligence capabilities. Thanks to these efforts, members of the FARC’s Secretariat, its highest ranking body, started falling in 2008. And during my administration it has lost not only its number one and two leaders, but also more than 20 of its regional ringleaders. While meeting our obligation to fight the guerrillas, we have not set aside the possibility of finding a peaceful solution.

What is your outlook for Latin America’s economic future, and what role will Colombia play in shaping this trajectory?

The world economic context has changed drastically during the past four years. The 2008 financial crisis that began in the US and later weakened the fiscal solvency of the euro zone resulted in a profound change in the main drivers of world economic activity; about three-quarters of the growth in world output is now attributable to emerging economies. Riding on this wave of growth, Latin America, which now has a GDP of about $6 trillion, will triple its size by 2050 to about $18 trillion. Colombia will play the role of regional leader along this path, consolidating its position as the third largest economy in the region, a milestone achieved during 2012. In 2050, Colombia’s GDP is forecasted at $1.1 trillion, more than three times its current size of $362 billion. This will be the byproduct of sound fiscal and macroeconomic policies targeted at increasing competitiveness, protecting investors’ rights, and reducing inequality. Colombia, along with whole region, will be a highly integrated and dynamic economy with a diverse export sector and access to billions of consumers around the world as a result of our continued efforts in signing FTAs. Colombia’s current economic strength, along with the structural fiscal reforms that have been approved during recent years, will enable the country to maintain stable growth rates in the future. High investment rates will continue to improve the country’s infrastructure, making it more competitive with respect to its peers. In addition, Colombia’s institutions are well prepared to cope with future external crises, as evidenced by the fact that Colombia was among just a handful of economies that managed to grow during the recent financial crisis. All these factors guarantee that Colombia will remain a leader within the region in the coming decades.