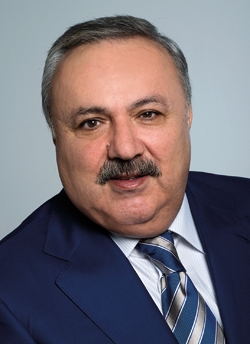 The Tipple that Teases

Chairman of the Supervisory Board, Ganja Sharab-2

Namig Mammadov graduated from the Department of Fruit and Viticulture of the Azerbaijan Agricultural Academy. In 1985, he joined Ganja Sharab-2 as the Head of the Sales and Supplies Department. From 1993 to 1999, he was the Director, and from 1999 to 2004 he was the Chairman of the Board of Directors. Since 2004, he has been the Chairman of the Supervisory Board. He has been awarded the Medal of Progress by the Republic of Azerbaijan.

Share on:
How would you rate viticulture in Azerbaijan compared to other countries in the region? Grapes are one of the most ancient and revered fruits in the world. Grapes have enchanted […]

How would you rate viticulture in Azerbaijan compared to other countries in the region?

Grapes are one of the most ancient and revered fruits in the world. Grapes have enchanted people with their elegance and beauty from time immemorial. Numerous archeological excavations carried out on Azerbaijani territory and the written heritage of ancient and medieval travelers, historians, and geographers, including Homer, Herodotus, Strabo, Colimelli, Hovgal, Masudi, and al-Muqaddasi provide evidence that Azerbaijan has always been noted for its tradition of viticulture. Although the foundations of industrial winemaking in Azerbaijan were laid in the middle of the 19th century, it only started to develop as a sector in 1969. National leader Heydar Aliyev, who later became the President of the Republic, made a number of important decisions to facilitate the development of viticulture. As a result of the measures taken, whereas in 1969 vineyards covered 57,100 hectares, they reached an area of 210,000 hectares in 1984. While in 1969 only 240,300 tons of grapes were cultivated, in 1984 the figure exceeded 2 million tons. This enabled Azerbaijan not only to overtake neighboring republics but also become the USSR’s leader in the production of grapes. In 1985, the USSR leadership passed measures to eliminate drunkenness and alcoholism, thus dealing a major blow to viticulture and winemaking. After the great leader returned to power in Azerbaijan, the Law on Viticulture and Winemaking and a number of other regulatory and legal acts were adopted in 2002. In addition, on December 15, 2011, President Ilham Aliyev signed into act a state program on the development of viticulture in Azerbaijan for 2012-2020. The program outlines prospects for the development of viticulture in the country. Specific instructions were issued to relevant public agencies to facilitate the development of the sector. Funds for the development of viticulture have been allocated from the state budget, the National Fund on Entrepreneurship Support, and through private investment. No other country in the region has approved such comprehensive public programs on the development of viticulture. The nine climatic zones available in Azerbaijan make it possible to plant and cultivate high-quality grapes in soils not requiring irrigation. Therefore, in comparison to other countries in the region, Azerbaijan has extensive opportunities for the development of viticulture, and we hope that this sector will soon become a leader of national agriculture.

How is Azerbaijani wine perceived globally, and what needs to be done in order to increase its brand image?

In the heyday of viticulture and winemaking in Azerbaijan in the 1970s and 1980s, Azerbaijani wines won two grand prix, 46 gold, 49 silver, and three bronze medals at various international and All-Union tasting exhibitions and festivals. Most of the wines produced in the Republic at the time—around 92%-95%—were unclarified and the rest were natural. Now, this proportion has changed in favor of natural wines. The change in proportion has also had an impact on the fame of Azerbaijani wine. The fact that grapes accounted for the biggest share of food exports from Azerbaijan in 2011 attests to a trend that new varieties of Azerbaijani wine are becoming increasingly recognized around the world. In order to enhance the brand image of Azerbaijani wine, it is necessary to ensure its original and individual nature. Some of the key measures to this end would include the effective utilization of more than 300 indigenous grape varieties cultivated in Azerbaijan’s nine climatic zones, the production of wine based on recognized grape varieties, the use of oak casks in the storage of wines in cellars, the restoration of the country’s previously renowned wine brands, and the development of new ones. We also think it is important to create a synergy of classic and modern technologies and use state-of-the-art equipment and bottling techniques.

How will domestic awareness and the appreciation of wine change in future years?

Azerbaijan is expected to significantly expand its vineyards and subsequently the production of grapes and wines in the near future—vineyards are expected to increase from 16,000 to 50,000 hectares by 2020. Since the production of wine will significantly exceed domestic consumption, it is necessary to explore foreign markets. In order to increase domestic consumption, it is necessary to get rid of the legacy of Soviet stereotyping and take effective measures to change public preferences. It is also necessary to inform the population about the nutritional and medicinal properties of wine. To achieve this, it might be useful to conduct various festivals, open tasting shows, and run campaigns to promote winemakers and their wines and improve public awareness in the wine-making districts of the Republic.

“No other country in the region has approved such comprehensive public programs on the development of viticulture.”

What is your total yearly production and how much of that is exported?

As is the case with any business, the managers of Ganja Sharab-2 are taking measures to develop the company, improve the quality of products, and increase the volume of production. To this end, the company has purchased and installed the latest processing equipment. A total of AZN1.6 million, or around $2 million, has been spent on this in the first nine months of 2012. As a result, the quality of our products has dramatically improved and the demand for them has increased. A total of 390,500 decaliters of wine was produced in the first 10 months of 2012. An analysis of the last seven years shows that the production of wine has increased by 178,300 decaliters. Issues relating to exports are always the focus of our management. In the same time period, a total of 214,100 decaliters of wine was exported, or six times more than in the same period of 2005. Our wines are exported to the Russian Federation and Ganja Sharab-2 is currently in talks with other countries regarding exports.

How would you characterize the investment climate for viticulture in Azerbaijan?