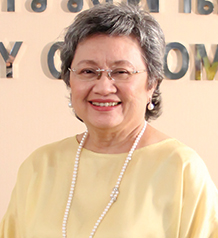 The Ties That Rhyme

Apiradi Tantraporn is the Minister of Commerce of Thailand, having previously served as Deputy Minister. Before that, she was the Executive Chairperson of the International Institute for Asia Pacific Studies at Bangkok University. Other positions have included Director General of the Department of Foreign Trade and Ambassador and Permanent Representative to the WTO. She has a strong academic background, having studied business administration at Thammasat University, later obtaining a master’s in international trade from Syracuse University in the US.

Share on:
TBY talks to Apiradi Tantraporn, Minister of Commerce of Thailand, on the future of ASEAN, the potential of TPP, and one of the world's strongest relationships

How far has the bloc come in fostering economic integration throughout the region, and to what extent does the recently launched AEC signal a new dawn for inter-regional cooperation?

Since the establishment of ASEAN, its economic integration has been strengthened and deepened through the ASEAN Trade in Goods Agreement (ATIGA), the ASEAN Framework Agreement on Service (AFAS), the ASEAN Comprehensive Investment Agreement (ACIA), and the ASEAN Framework Agreement on Mutual Recognition Agreements, just to name a few. In addition, the establishment of committees and working groups on trade and investment issues, as well as cooperation in the areas of customs modernization and trade facilitation, have assisted ASEAN well in reducing trade barriers among themselves.

Furthermore, ASEAN has entered into a number of free trade agreements with other non-ASEAN partners around the world. Important among these are agreements with China, Japan, South Korea, India, Australia, and New Zealand. These initiatives are an indication that ASEAN, as a single community playing an active role in the regional and world economy, is expanding ASEAN trade influence and using these agreements as tools for improving ASEAN trade competitiveness. Currently, the negotiation under Regional Comprehensive Economic Partnership (RCEP) initiative aims to be an ASEAN-led process through which ASEAN would broaden and deepen its economic engagements with its six FTA partners. The RCEP has the potential to transform the region into an integrated market of more than three billion people (over 45% of the world’s population), with a combined GDP of about USD17 trillion, about 27% of the world’s current annual GDP. In summary, since the ASEAN Economic Community Blueprint’s inception in 2007, there have been four targets: first, a single market and production base; second, a business-friendly and innovation-supporting regional environment through the adoption of a common framework or standards; third, equitable economic developments; and fourth, full integration into the global economy. ASEAN intra-regional trade between 2007 and 2014 almost doubled from USD1.6 trillion to USD2.5 trillion. At present, with the fast-changing nature of world trade and new commercial challenges, Thailand gives priority to strengthening its internal economy while enhancing ASEAN’s trade stability. Under the “ASEAN as one market” strategy, we seek shared prosperity in international trade, particularly through building and connecting the regional value chain with the global economy.

In February of 2016, Malaysia initiated its first step toward implementing TPP. How will that partnership affect trade in the region and the economic relationship between Thailand and Malaysia, should it be ratified?

Thailand and Malaysia have long been important trading partners with each other. In 2015, Malaysia was ASEAN’s second-largest trading partner with Thailand, with trade of roughly USD22 billion. The products to be traded include automobiles and parts, computer components and parts, chemicals, crude oil, and integrated circuits. The Trans-Pacific Partnership (TPP) would play an important role in the region as four ASEAN countries (Brunei, Malaysia, Singapore, and Vietnam) are now potential signatories. It would have positive effects on the economy, trade, and investment of member countries and lead to an increase in trade volumes among them.

What do you think needs to be done to unlock the full potential of Thailand-Malaysia trade relations?

Thailand and Malaysia have enjoyed a long, intimate, and cordial relationship based on a solid foundation and deep bonds of affinity and trust. Both countries are active and founding members of ASEAN. Since 1967, Malaysia has been a major trading partner of Thailand. In the past five years, total trade between Thailand and Malaysia has averaged USD25 billion per annum. In 2015, Malaysia was Thailand’s fourth largest trading partner and the largest in ASEAN. This is primarily attributable to cross-border trade, which accounts for 60-70% of the total trade value between the two countries.