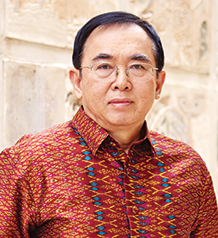 The Thread Of History

Vira Rojpojchanarat has been working in the cultural sector of the royal Thai government in the fields of archaeology and restoration since 1978. From 1999 onwards, he has taken key official executive positions, namely Deputy Director-General of the Fine Arts Department, Deputy Permanent Secretary of the Ministry of Culture, Permanent Secretary of the Ministry of Culture, Advisor to the Prime Minister, and is currently the incumbent Minister of Culture. He was awarded degrees in architecture and public administration from Thailand’s top universities, including Chulalongkorn University and Thammasat University.

Share on:
TBY talks to Vira Rojpojchanarat, Minister of Culture of Thailand, on promoting and preserving Thai culture in a globalizing world.

How is the Ministry of Culture promoting Thai films outside of the country?

The Thai government has placed a huge importance on the film industry because it increases revenues for the country, while also boosting tourist numbers and the image of Thailand abroad. We also have our National Board of Film, which is chaired by Prime Minister Prayut Chan-o-cha, and which aims to be one of the world’s most famous locations for film productions as well as promoting the Thai film industry both locally and abroad. We have produced more than 746 films in Thailand, generating about $35 million in 2014.

Earlier this year you were involved in a campaign to encourage Thai citizens to wear more traditional clothing. How important is this to preserve the national identity?

It is very important. Miss Thailand has been awarded the best national costume in the Miss Universe competition five times, which is a source of pride. Thai silk is a great product; we have high-quality material and designs. There have been many developments and evolutions over hundreds of years in traditional Thai clothing. Jewelry designers in Thailand are also famous. Queen Sirikit supports Thai dress and textiles, especially traditional and authentic dress for boosting the income of the communities. We have heritage day every Tuesday, when we promote Thai dress for officials to wear across the country. This is symbolic and not compulsory, but by dressing in our traditional attire—at least once a week—we show that we are serious about preserving our national identity.

How is Thai culture defining itself in the context of globalization?

Thai culture is especially dynamic because Thai people are able to adapt to the quickly changing world. We assimilate into new cultures and can easily and effectively adjust ourselves, which is how we are able to survive the modern era. We maintain the best aspects of outside cultures and adjust them to suit our culture. Cultures around the world are changing by the day and we play a part in developing them. Thais must know that there are traditions that we need to preserve, but that we must also adjust into a new way of life. We want Thai children to be aware of Thai-ness and also to be aware of the modern world at the same time. We want them to strike a balance between old and new and to recognize, as we do, that the world is changing.

What roles does culture play in bringing in tourism revenues for the country?

We expect to have around 30 million visitors to Thailand in 2015, which will generate around THB2.2 billion. Tourists are not only attracted to natural places like beaches or mountains, but also cultural attractions. Historic buildings, towns, or museums play a big part in tourists’ agenda when visiting Thailand. The Ministry of Culture proudly manages our museums, historic parks, World Heritage temples, and festivals. We recently launched a tourist application, which introduced QR codes to museums to offer an easier and smarter experience for visitors at museums, and also audio guides. We expect the number of visitors will be increased from 5 million to 8 million visitors this year with the promotion and marketing of the application.

Our goal is to prepare for the ASEAN community; we have established the ASEAN Cultural Center this year to promote the understanding of ASEAN in Thailand. We also promote and provide support for folk artists and performers to help them succeed in the modern era by generating more jobs for them. We collaborate with other agencies, such as the Ministry of Foreign Affairs, the Ministry of Commerce, Ministry of Tourism and Sports, and also Ministry of ICT. When we promote Thailand globally, it has to be a joint effort. For the promotion of culture, we are going to do it not only in ASEAN, but across Asia, Europe, and Africa, and even in South America.