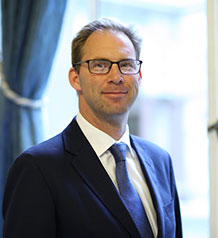 The Test of Time

Minister for the Middle East and North Africa, UK

Tobias was educated in Bonn and Vienna when his parents were overseas as members of the United Nations. He returned to attend Loughborough University and subsequently completed an MBA at City University Business School. He also completed the senior executive course in National and International Studies at the Kennedy School of Government, Harvard University. Tobias was in the Royal Green Jackets from 1991 to 1996, and served in Northern Ireland, Cyprus, Kuwait, Germany, Gibraltar, and Bosnia. He left the Army at the rank of Captain and is a current Army Reservist. Tobias was a senior business development manager with the London Stock Exchange for two years, and then with Allen and Overy in a senior role. Tobias Ellwood was appointed as Parliamentary Under Secretary of State at the Foreign and Commonwealth Office in July 2014. He was elected Conservative MP for Bournemouth East in May 2005.

Share on:
"The UK trades with the UAE across a broad spectrum of sectors."

How would you describe the bilateral relationship between the UAE and the UK?

Our relationship with the UAE is strong and getting stronger. It is well established and has stood the test of time. Its strength and depth can best be seen in the broad range of areas on which we work together closely for mutual benefit. For example, there exists a healthy bilateral trade relationship between our two countries, worth $19 billion by the end of 2013, and the UK-UAE Business Council has set a goal to increase trade to $32 billion by 2020. We work together politically and militarily to tackle common threats to our security in the region. All of this is aided by the close relationships between our businesses, institutions, and people; there are in excess of 4,000 British businesses operating in the UAE, around 120,000 British nationals reside there, and more than a million visit each year. In return, more than 250,000 visits to the UK are made by Emiratis each year, and all of this reinforces and ensures the continuing and ever-growing friendship between our two countries.

What opportunities exist for UK-based companies to invest in the UAE?

The UK trades with the UAE across a broad spectrum of sectors and at all levels. The types of UK business trading with the UAE range from small and specialized companies to large multinationals such as Shell, BP, HSBC, Carillion, Rolls Royce, and many more. Our bilateral trade with UAE increased from $11 billion in 2009 to $16 billion in 2013 and was at $17 billion for 2014. Exports have increased across a broad range of sectors. These include food and drink, wood, textiles, iron and steel, inorganic chemicals, machinery, vehicles, telecoms equipment, and much more. We are also seeing new opportunities in infrastructure, leisure, and tourism for companies both large and small.

How important is it for the UK to pursue investment opportunities for clean energy and renewable resources in the UAE?

The government left January’s World Future Energy Summit in Abu Dhabi in no doubt as to the commitment the Emiratis have to this agenda. The UK and the UAE are close partners in the development of clean energy research and policies. As an example, the UAE is already a major investor in the UK, primarily through the Abu Dhabi Future Energy Company (Masdar). Currently, Masdar holds a 20% stake in the London Array offshore wind farm. More recently, they acquired a 35% stake in the Dudgeon Offshore Wind Farm off the Norfolk coast, making them the single largest investor in wind energy in the UK. These projects combined will generate enough “green” electricity to power almost one million homes in the UK each year, and our partnership with the UAE has made the UK the global leader in offshore wind power; we now have more installed capacity than the rest of the world put together. With the creation of an ambitious renewable energy agenda, the UAE has a strategy to develop alternative sources of energy and produce 7% of electricity from renewable sources by 2020. As a long-term partner, we remain ready to support that ambition.

How do you see Dubai’s Al Maktoum International Airport expansion affecting global logistics and transport and what opportunity does this bring to UK-based companies?

Dubai has now firmly secured its status as a global transport and logistics hub. In January 2015, Dubai International Airport surpassed Heathrow as the world’s busiest airport for international passengers. This development has primarily been on the back of Emirates Airline’s phenomenal growth in the last three decades. The ambitious expansion program planned for Al-Maktoum International Airport (AMIA) will make it the biggest airport in the world by 2050 with the capacity to handle 255 million passengers a year. The entire development will cover an area of 56 square kilometers and it is due to be completed by the end of 2021. AMIA will be part of the world’s first 140-sq-km purpose-built aerotropolis, Dubai World Central (DWC), which is expected to be completed by 2022. DWC will connect AMIA to land and sea links through major roads, rail, and metro links as well as the Jebel Ali port across from DWC. It will also include the Expo 2020 site, which is expected to host 25 million visitors. UK companies are well placed to take advantage of these opportunities, especially given the support from UK Export Finance (UKEF), the UK’s official export credit agency. UKEF has made an initial offer of $2 billion of export credit guarantees to Dubai Aviation Engineering Projects (DAEP) for this project. The UKEF offer puts UK companies in a favorable position to bid for tenders for this project because in order to avail the funding, a minimum of 20% content (goods and services) has to be sourced from UK companies. I believe their offer puts British companies in a strong bidding position. Additional support for UK companies is provided by UK Trade & Investment (UKTI) and the British Embassy in Dubai, which have set up an Airports Working Group that will assist companies looking to be part of the AMIA development and the other airports projects in the UAE.

What role does the UAE play in the security of the Middle East?

The UAE’s security is the UK’s security. Our military relationship has been cultivated over many years, as evidenced by more Emirati officers graduating from the Royal Military Academy Sandhurst, than from any other country other than the UK. But equally, it is a vibrant and dynamic relationship, built around common values, understanding, and mutual respect. It is this that binds us together as we face future security challenges together. A key element of this military relationship is the continued UK military presence in the UAE. Historically this was with the Trucial Scouts and the Royal Air Force at Sharjah. Today British military personnel, fast jets, and aerial surveillance helicopters are working alongside the highly capable and extremely professional UAE Armed Forces to collectively maintain a safe and secure region. The UAE is a vital ally in the fight against terrorism. Not only has the UAE supported the international community through reliable access, basing, and over-flights, its military has made substantial contributions, most recently in Afghanistan, Libya, Yemen, and the coalition against ISIL, but before that in the first Gulf War. The UAE’s work in supporting stability in the region is not confined to the military. The UAE is the first Gulf State to form a dedicated development ministry. In 2013, the UAE became the world’s largest aid donor in proportion to gross national income (1.34% ODA/GNI) with an aid budget that amounted to $5.2bn. The UK and the UAE have a track record of working together on issues in the Middle East; I hope this trend of ever-closer partnership will continue.