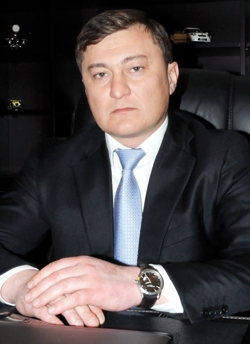 Faig Safarov was born in 1978 and graduated from the State Oil Academy of Azerbaijan’s International Relations department in 2000. He has been in business ever since, and is currently the President of KIA Motors Azerbaijan.

How would you describe the market for Kia cars in Azerbaijan?

If we analyze the market for the sale of new cars, we can see that in 2012 the market expanded by 30% in comparison with 2007. If we also compare the sales of Kia cars over these years, we observe an eight fold increase. Over a short period of time, the Kia brand has settled in third place and is now very close to becoming the second best selling brand in the market. It would be no mistake to say that Kia cars are very popular and prestigious in Azerbaijan. Therefore, one can conclude that the balance between the prices and technical characteristics of our models is optimal. We see this as one of the main reasons for such a dramatic increase in our sales. Generally speaking, as is the case with the markets of other countries, it is possible to follow the trend in Azerbaijan’s car market. People give preference to not very expensive, practical, and, at the same time, good-looking cars. The growing international popularity of Kia cars is the result of the company’s efforts to meet these criteria.

How do you compete with and differentiate yourself from the many other car distributors in Azerbaijan?

Azerbaijan has been one of the world’s most dynamically developing countries for the past several years. The purchasing power of the population has significantly increased. Accordingly, demand should also be at a high level. Therefore, we have to acknowledge that since demand exceeds supply in Azerbaijan’s new cars market, it may be wrong to say that there is tough competition. We can’t meet this demand. One of the reasons for that is the growing popularity of Kia cars throughout the world. In 2012, the company exceeded its manufacturing plan by 130%, but if it hadn’t been for the shortage of cars, this indicator could have been even higher. At the same time, we understand that we have to take this opportunity to expand our sales and service networks. From this point of view, 2012 was a very successful year as we succeeded in opening a large service center in the country’s second biggest city. As to how we differentiate ourselves from others, we try to proceed from the standpoint of our customer’s comfort. Customer satisfaction is the driving force of our everyday work. The key measure of success in our business is not tangible and cannot be measured with money. It is our attitude to customers that has no unit of measure and is the key to our success.

Over the past year, which models have seen the most popularity in Azerbaijan?

According to the results of 2012, the most popular models were the Cerato, Sportage, Rio, Optima, and Sorento. As for growth in sales, we can nominate the Sorento, Cerato, Cadenza, Picanto, and Optima. The preferences of Azerbaijani customers are fairly stable. The sales of the Picanto model have also steadily increased. This attests to the fact that the number of women driving cars is on the increase. The most memorable premiere of 2012 was the introduction of the Quoris, a model that belongs to a completely new market segment. This model has a unique design, is based on the latest technologies, and is highly comfortable. We started offering it at the end of 2011 and the result has exceeded our expectations. This is evidence of the fact that people already perceive Kia as part of the premium market segment.

What are your growth objectives for 2013?

In 2013, in an effort to address customer demand, we intend to increase the number of our sales and service centers. Most importantly, though, we plan to bring our market share to 18% and compete to become the second biggest market player. We will be aided in this by the introduction of the latest generation of such models as Cee’d, Cerato, Carens, and Soul in 2013.

What have been the most significant changes in Azerbaijan’s investment landscape over the past decade?

Regarding investments, I would like to approach this question from a different angle. In my view, the Ilham Aliyev administration has identified the most important spheres for investment. The economic and military power of the state, its international reputation, and the social and economic prosperity of the population are growing. In other words, investment is channeled into the country as a whole and its people.