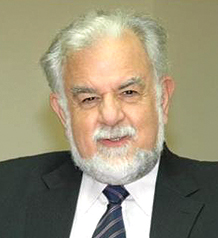 Ví­ctor Carlos Urrutia has vast experience in the energy sector, having served as an independent consultant and completed numerous market and feasibility studies over his career. He graduated from Purdue University in Indiana, US, and holds a Doctorate and Master’s degree in Physics from the same university. He has also taught electrical engineering, communications, and physics at the University of Panama. He has served as administrator of the Autoridad Nacional de los Servicios Públicos ASEP, allocating concessions and licenses for electricity generation and the reintroduction of tendering rounds for assigning resources. He is a member of the Panamanian Society of Engineers and Architects and the Institute of Electrical and Electronics Engineers (IEEE).

Share on:
What are the main factors and indicators of growth in the sector? From an electricity standpoint, we have clear indicators related to energy consumption and daily maximum demand, both of […]

What are the main factors and indicators of growth in the sector?

From an electricity standpoint, we have clear indicators related to energy consumption and daily maximum demand, both of which are rising. We have seen sustained annual demand growth over the past five or six years of over 5% on average, which foretells the arrival of significant further investment. And meanwhile, all indicators point to firm growth, which is no surprise given the strong economic performance Panama is currently displaying.

Can you elaborate on the main projects attracting government investment?

Developments are mostly observed in the private sector. We indicate how much power is required, and then organize tenders to award concessions to power companies, which then build the necessary facilities. Currently, we have a short-term tender to ensure sufficient power as we experienced shortages two years ago. We have received two bids each for 350 MW of capacity. We will collect as many offers as possible and award up to 350 MW to a combination of potential investors. That should come between the spring of 2018 and 2020 and suffice to underpin electricity sector growth. There are plans in place to undertake sequential lines, and our distribution is carried out according to a planned schedule.

The country heavily relies on hydropower. Which other alternatives is the government considering?

In the past we have placed much emphasis on hydropower as an economically viable alternative, as it is a clean and well-proven solution. Last year close to 60% of our electricity generation came from this source, although we have been seriously considering alternative options. Hydropower projects are rapidly diminishing as many have already been completed, but there will be a large number of smaller hydro projects coming online to support economic growth. This will become less important over time. Our reliance on rain is affected by seasonal variation, but we are able to plan in anticipation of this. In the renewables field we have been looking at wind, and a privately developed 280 MW wind power plant has been set up in the midlands. This will be the largest of its type in Central America. We also have an active group of people working on solar energy, which previously had been prohibitively expensive to develop. In Panama we have chosen to neglect solar energy development and let other countries such as Spain and Germany pursue it. New technology is expensive, and we lack the ability and experience to work on solar energy. There is, however, a high level of interest in developing it here. And it is becoming more economical, with differences even in comparison with last year. We are hoping to integrate different energy sources in a combined grid. For a time we thought the solution was to move toward natural gas, but ultimately we found ourselves in a situation where the price of oil dropped, rendering it more competitive. We anticipate some good offers in oil and gas depending on prices and escalation trends.

What has to be done to transform Panama into a leading energy sector player?

LNG pricing in different regions varies considerably. There is currently no cost-effective means of transporting LNG from the Atlantic to the Pacific. The largest consumers of LNG, such as Japan, obtain it from the Atlantic, where prices are more favorable. Meanwhile, we expect the expansion of the Panama Canal to have a major factor in making LNG an obtainable commodity. At the moment this is problematic because of long-term contracts and point-to-point deliveries. There is, then, not really a fluid commodity market in place for LNG today, although strong potential exists to develop one. We have hopes of Panama becoming a center for storage solutions. In the long term, ships will be using LNG for propulsion, which will make the LNG business more flexible. The government is actively assessing the situation and its alternatives, and the moment it is deemed favorable we will make our move. What we do not want to do is enter the business ourselves; we simply want to ensure that it is being done properly.

How would you assess the importance of the electricity connection agreement signed by President Varela and President Santos of Colombia?

Central American nations as a whole are smaller than Colombia, and it has taken us a long time to work out a deal. We developed a strong framework agreement to establish connectivity between the two states, in which we perceive strong potential. The facilities and institutions are there, but it is difficult to get underway due to certain environmental considerations. This will require time more than anything else. We have long since formulated the economic dimension of the agreement, and know the potential and future scenario. The political will is there, and project feasibility has been established.