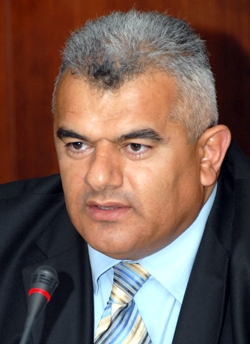 The Smelt of Success

Share on:
What projects are underway at Det.Al Holding? Det.Al Holding has several ongoing projects, one of which is the development of the Ganja Aluminum Smelter. We are planning to increase the […]

What projects are underway at Det.Al Holding?

What is the outlook for your steel production?

How much of your production is exported?

We export all of our capacity of iron ore concentrate to foreign countries through ports on the Black Sea. We sell part of our iron ore to customers in Georgia and Azerbaijan. From our region, 90% of the iron ore goes to China for steel production. In the metallurgy sector, different companies use iron ore for various reasons; some make a mix using magnesium, for example. We export a small quantity to Georgia for this reason. Regarding aluminum, we export 4,500 tons a month and we sell 400 or 500 tons on the local market. The rest is exported to the EU and Turkey. Local market demand will increase over the next few years, because we have information that an Azerbaijani industrial group is planning to open a new factory that will use our aluminum as its main raw material for producing goods, such as cables, construction materials, and equipment.

“We export all of our capacity of iron ore concentrate to foreign countries through ports on the Black Sea.”

How would you describe the current investment climate in Azerbaijan’s mining industry?

It is very attractive, especially for our factories outside of Baku. The government of Azerbaijan is giving increased attention to the possibilities and opportunities of increasing the economic and social wellbeing of all regions of the country, as well as in Baku. All of the infrastructure, such as water, gas, electricity, and roads are at a very developed level, so it is very attractive for foreign investors. In addition to this, the government is offering incentives to foreign investors through different regulations and laws. Some of these advantages are in taxation and customs regulations, as well as banking issues. This makes investment very easy and secure in Azerbaijan. The infrastructure in the region has also increased and is in excellent condition now. For example, the government spent more than ‚¬150 million on the electricity supply infrastructure for the construction of our smelter and steel factories, which is very important in metallurgy. For this reason, other companies working in the metallurgy sector want to build their factories close to ours. It is a sign that the government is actively helping the economy. It is making that area attractive for foreign investors. The economy, infrastructure, and government are all moving in the right direction for foreign investors. In general, the foreign investment climate in Azerbaijan is very attractive and it gets better every year.

What needs to be done to attract more FDI into the mining industry?

The Azerbaijani government is actively trying to increase non-oil FDI. It is increasing infrastructure development in the regions outside of Baku to help promote this. The government has a long-term program for increasing the economy and social wellbeing in different regions. For all regions in Azerbaijan, the government has approved different programs for development, and the majority of them are focused on increasing non-oil industrial activity. Azerbaijan exports a lot of gas, oil, and electricity, and as a producer of oil and gas products, the electricity here is cheaper than in other countries. Metallurgy relies on electricity and gas for production; approximately 40% of the cost of aluminum and steel production is electricity. When the government provides these advantages, it opens the way for other companies, agricultural centers, and factories that produce different goods for export and local requirements. The share of the non-oil industry in Azerbaijan’s economy is increasing every year. Oil production here has reached a plateau and will decrease every year. President Ilham Aliyev made a speech about the development of the non-oil sector being a high priority. Due to this, we receive a great deal of support from the government for our work.

What are your medium-term goals for Det.Al Holding over the next five years?

Over the course of the next five years, we will have a new alumina factory with a capacity of 450,000 tons. We have developed a new technological process for the production of alumina from our alunite reserves in Azerbaijan, and it will make our product very profitable as the cost will decrease because we will not need to transport the raw material from abroad. The government supports us, and we are now working with different institutions from the US, Canada, Turkey, Russia, and China. We have 3 million tons of approved reserves, which is enough for the long term. Over the course of the next five years, we will also build a 200,000-ton capacity smelter and a semi-fabrication factory with a capacity of 50,000 tons. The capacity of our steel project will be 2 million tons of concentrate, 1.2 million tons of pellets, nearly 1 million tons of HBI/DRI, and approximately 800,000 tons of various steel products. In the next five years, Det.Al Holding will become the largest aluminum and steel producer in the country and the region.