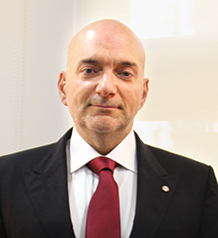 With a PhD in Business Management, HE Alain Hakim is currently the Minister of Economy and Trade in Lebanon. He is also the Deputy General Manager at Credit Libanais Group, the CEO of Hermes T&T company (part of the Credit Libanais Group), and a board member in several group subsidiaries. He has previously held several other positions in the banking sector. He has kept a close relationship with the academic world, where he is chairperson at the Business Administration Faculty of Saint Joseph University as well as lecturer at the Institut Supérieur d’Etudes Bancaires. He participates in several academic research studies in the business management field. His actions under his mandate as Minister of Economy and Trade revolve around the idea that the role of the economy is to benefit the welfare of its citizens, where he encourages reforms that aim to increase competition in the market, protect consumers’ rights, and create job opportunities for the youth.

Share on:
TBY talks to HE Dr. Alain Hakim, Minister of Economy and Trade, on projected growth, the balance of trade, and the role of PPPs.

According to the World Bank’s report on the Global Economic Prospects, Lebanon is among the non-oil-producing economies in the region expected to see reasonable growth from 2015 to 2017. What is the Ministry’s outlook for the Lebanese economy over the medium term?

Most forecasts indicate an increase in economic growth rates in the year 2015; however, this improvement primarily depends on a better security situation and on political stability, which can revive the economy and allow an increase in the various economic sectors’ activities. Political stability will be achieved, first and most importantly, by the election of the President of the Lebanese Republic as soon as possible in order to rebuild investor and consumer confidence and increase capital inflows to Lebanon. It should be noted that in spite of all that the Lebanese economy has endured since has 2011, it was able to record positive rates of growth, ranging between 1% and 1.5%. This is evidence of the economy’s immunity and ability to survive in the face of these crises. In addition, the IMF raised its estimate for growth to 2.5% in 2015, according to its latest report.

What steps are being taken to improve Lebanon’s balance of trade?

The Ministry’s aim is to promote Lebanon as a trade partner in foreign markets and this is being done through pursuing an action plan and a program of meetings, which aim to activate economic diplomacy with countries outside of the Middle East. Economic diplomacy is the use of the full spectrum of economic tools of the state to achieve its national interest. Economic diplomacy includes all the economic activities related to export, import, investment, lending, aid, and free trade agreements. As such, various meetings with the ambassadors of countries that Lebanon wishes to expand its economic and trade relations with are taking place. Moreover, the Ministry is mobilizing potential trade agreements that would facilitate the market access of Lebanese products such as the free trade agreements (FTA) with Aghadir Countries (Jordan, Egypt, Tunisia, and Morocco) and the MERCOSUR countries (Brazil, Argentina, Uruguay, Paraguay, and Venezuela). On top of this, MoET organized the Lebanon EU Trade, Industry, and Agriculture Services and Internal markets subcommittees, where major subjects were discussed to increase the trade exchange and facilitate the market access to European countries.

What is the role of public-private partnerships (PPPs) in the development of the economy, what initiatives are aimed at strengthening the investment climate and promoting the country as a FDI destination?

The primary objective of the PPP is to be able to use the experience and the ability of private funding on the public platform, whereby investments are private and are managed by the private sector, but within the legal framework depicted in the PPP law. As such, reforms should be set and implemented, in terms of liberalization of economic sectors such as electricity and telecommunications, and in terms of securing an investment climate that allows the development of a suitable economic infrastructure for the execution of existing and expected activities such as oil extraction. On another note, and in regard to the initiatives aimed at strengthening the investment climate and promoting the country as a FDI destination, the MoET launched the “Lebanon SME strategy: a roadmap to 2020,” which aims to accelerate the creation of startups, increase the productivity of existing SMEs, and improve the performance of existing SMEs. The main pillars of this strategy are to improve access to finance for startups and existing SMEs particularly through equity financing, strengthen and upgrading the legal and regulatory framework for businesses, facilitate access to markets for SMEs and increasing their compliance with international standards, upgrade the skills available and aligning them with the needs of businesses, and promote innovation.